The WTF Files: Google Street View And The Man In The Trunk

Google Street View recently launched in 20 cities in Germany, and already the first mysterious sighting has occurred.  The odd scene appeared where a man, presumably nude, appears to be climbing from the trunk of a car while a dog lies on the ground nearby.

Oh Thursday, Der Spiegel discovered the image, which is currently unavailable. According to Google, the mysterious image “is under review and will be available soon.”  Granted, this is not the strangest mystery to appear on Google Street View, but it raises a few questions. Is the man escaping the trunk or settling in? Is he really naked? Is the dog dead?  What’s with the equipment to the left of the car?  Is this scene merely a prank on the Google Street View team?  No answers yet, but when they come in I’ll let you know.

I posted this just because it looks so strange.  But hey, haven’t we all been there before?  Like that time last year when I had the cold from hell and was zombied-out on a double dose of Benadryl and grabbed a jelly donut.  Little did I know my nose was covered with white powder as I was, basically, tripping the light fantastic all the way down Saint Denis Street at 9:00am.  “Mommy, what’s wrong with that man?” My point is, it’s quite possible this guy was fixing the broken latch of his back seat on the hottest day of the year.  If that does turn out to be the case, I will immediately pull down this post.  And Mr. Trunk should immediately sue Google for a googol dollars (it’s spelled googol when you’re referring to numbers, and it’s a 1 followed by 100 zeros … wouldn’t that be ironic?) 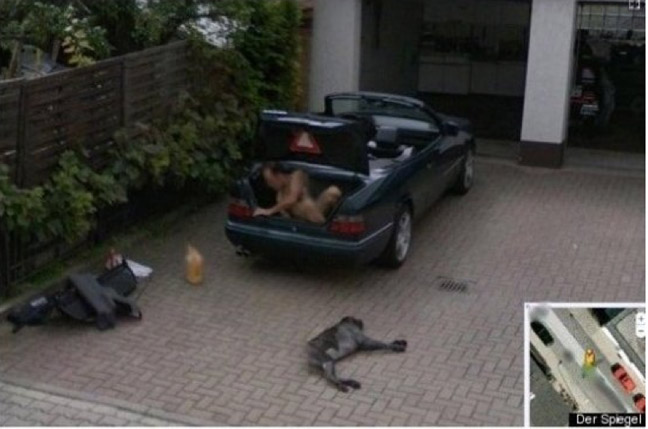