In “one of the biggest mass deaths of cetaceans in Irish history” at least 33 whales have beached themselves on the north-west coast of County Donegal.

“They were found on Rutland Island near Burtonport on Saturday. It’s thought they were the same group spotted in the Outer Hebrides at the end of October.”

The whales’ deaths come just after the latest research into cetacean strandings, which suggests that stranded whales and dolphins often suffer from hearing loss. The finding is the latest salvo in the long-running controversy over whether undersea noise pollution is harming whales.  David Mann of the University of South Florida and colleagues looked at eight species of cetacean, all of which had either stranded themselves or become entangled in fishing gear.  4 out of 7 of the bottlenose dolphins they looked at, and 5 out of 14 rough-toothed dolphins, had either severe or profound hearing loss, as did one short-finned pilot whale.  They also looked at 7 Risso’s dolphins, 2 pygmy killer whales, 1 Atlantic spotted dolphin, 1 spinner dolphin, and 1 Gervais’ beaked whale. None of them had any hearing problems, so it seems hearing loss is far from the only possible cause for strandings. In total, 9 of the 34 animals had hearing problems (PLoS ONE, DOI: 10.1371/journal.pone.0013824).

Mann emphasises that the findings do not provide a catch-all explanation for strandings “We do not know the noise exposure history of any of these [animals]. Based on the locations of stranding, it is possible that some of them have been exposed to chronic noise from boating and shipping, while for others this is unlikely.”  Nevertheless it’s well-established that the oceans have got noisier over the last 60 years, largely because of commercial shipping, and the trend is continuing. Earlier this year, north Atlantic right whales were found to be calling more loudly to each other, apparently to compensate for the constant noise.  In theory you would expect whales and dolphins to get into difficulties if they experienced disruptively loud noise, or went deaf, because they use echolocation to navigate.  Navy sonar has often been in the frame for whale strandings, because the sounds produced are so loud.  But they quickly fade into insignificance the further away from them the animals are, whereas the rumble of shipping noise permeates the ocean.  In 2006 a study found no link between Navy sonar and whale strandings. 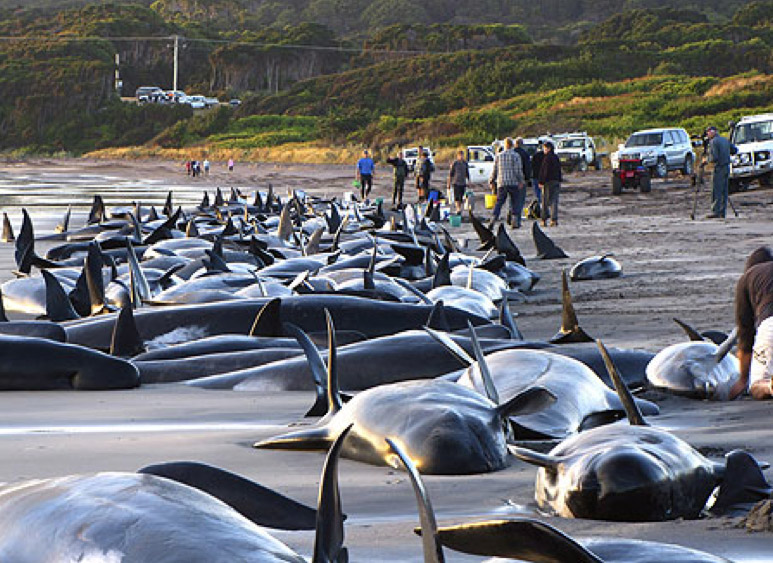