Surface Where A Stem Cell Grows Can Determine Its Future

Like a child, a stem cell can grow up to be just about anything. Eventually it picks a job, however, during a process called differentiation. Scientists can influence, if not always control, the outcome by applying compounds called growth factors. Now Jianping Fu, a biomedical and mechanical engineer at the University of Michigan, and his colleagues have discovered that the force exerted by a stem cell onto a surface is an important part of in both predicting and altering what type of cell it will develop into.

Fu placed a stem cell on a scaffold of 13-micron-long silicone posts and found that the amount of force the cell exerted on those posts indicated it would eventually become a fat cell. But he also found that when he stiffened the surface by shortening the posts, it caused the same line of stem cells to turn into bone. Knowing how to predict and manipulate the fate of stem cells will make therapies based on them—for spinal-injury repair, bone grafts, skin transplants—easier to develop. 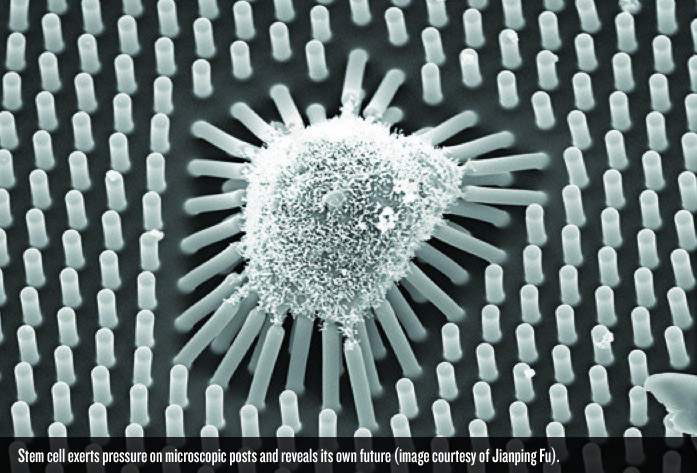