Tom Weber of The Daily Beast recently conducted a controlled experiment setting out to crack the algorithms of Facebook.  The experiement involved 25 people and thousands of News Feed items over several weeks.  They uncovered 10 secrets of the Facebook code:

The more digital our daily lives become, the more perplexing the questions seem. Will the growth of social media destroy our notions of privacy? Is democracy helped or harmed by the cacophony of opinions online? And perhaps most confounding: Why does that guy I barely know from the 10th grade keep showing up in my Facebook feed?

If you’ve ever spent time on Facebook, you’ve probably pondered that last one. The social-networking giant promises to keep us connected with our friends in exchange for pumping a steady diet of advertising at us—but the algorithms Facebook uses to decide what news to pass along can seem capricious or altogether impenetrable.

Facebook, much like Google with its search algorithms, consistently refuses to go into details about how it picks and pans content (save a few glancing details this year about the enigmatic engine that powers it, EdgeRank. So, with the mystery of that 10th-grade friend in mind, The Daily Beast set out to crack the code of Facebook’s personalized news feed. Why do some friends seem to pop up constantly, while others are seldom seen? How much do the clicks of other friends in your network affect what you’re shown? Does Facebook reward some activities with undue exposure? And can you “stalk” you way into a friend’s news feed by obsessively viewing their page and photos? 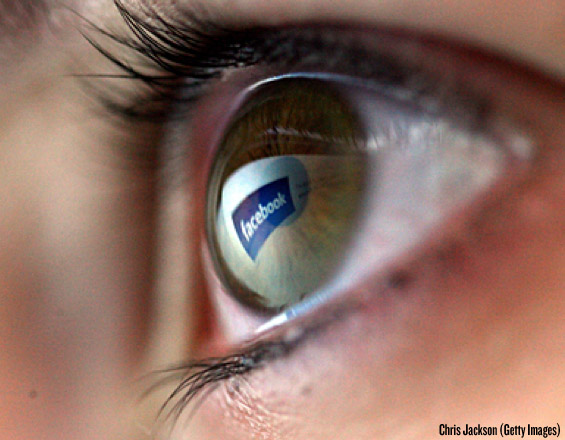 To get the answers, we devised an experiment, creating our own virtual test lab within the confines of Facebook and tracking thousands of news-feed items over a period of several weeks. The focal point of our experiment: Phil Simonetti, a 60-year-old Facebook newcomer who allowed us to dictate and monitor his every move.

Like a half-billion people before him, Simonetti joined Facebook and began typing in his status updates. But in this case, Simonetti’s only friends were a hand-picked roster of more than two dozen volunteers who agreed to sift through their news feeds for the duration of our experiment, dutifully recording any Phil sightings.

As our volunteers checked in with their reports, some remarkable findings began to emerge:

1. Facebook’s Bias Against Newcomers. If there’s one thing our experiment made all too clear, it’s that following 500 million people into a party means that a lot of the beer and pretzels are already long gone. Poor Phil spent his first week shouting his updates, posted several times a day, yet most of his ready-made “friends” never noticed a peep on their news feeds. His invisibility was especially acute among those with lengthy, well-established lists of friends. Phil’s perpetual conversation with the ether only stopped when we instructed our volunteers to interact with him. A dynamic which leads to…

2. Facebook’s Catch-22: To get exposure on Facebook, you need friends to interact with your updates in certain ways (more on that below). But you aren’t likely to have friends interacting with your updates if you don’t have exposure in the first place. (Memo to Facebook newcomers: Try to get a few friends to click like crazy on your items.)

3. The Velvet Rope: “Top News“: The real fun began when we eventually instructed different subgroups of our volunteer-friend force to interact with Phil in a controlled manner.  Suddenly, Phil began popping up on feeds. But which ones? The current newsfeed system offers users two options: “Top News,” a highly selective feed of updates from friends, and “Most Recent,” a “fire hose” that shows updates in reverse chronological order.  A bunch of interactions, however, still do not guarantee that you’ll get on anyone’s Top News, which is how a vast majority of Facebook users get their information. Some of our volunteers reported frequent sightings of Phil’s updates in their Top News feeds, while others saw him rarely—and in some cases, never. Top News will show you hours-old updates from some friends while ignoring newer postings from others.  Facebook has a reason to do this: If users saw all of the posts for all of their friends, they might be overwhelmed (or bored) and tune out—a disaster for Facebook, which needs eyeballs to earn revenue. But in doing so, Facebook’s ranking system makes judgments about items it thinks you’ll be interested in.  What became clear after two weeks was that it’s not the amount of activity you have, but the type (more on that below).

4. “Most Recent” News Is Censored, Too. As veteran Facebook users know, it’s a simple matter to switch from the filtered-and-prioritized Top News feed to the “fire hose” of Most Recent. In Most Recent, items are displayed in reverse chronological order. So many users naturally assume that Most Recent contains every update from all of their friends.  Not so, as our experiment showed.  Even with test-subject Simonetti posting updates, links, photos, and videos several times a day, a few of our volunteers found that the items didn’t appear in their Most Recent feeds. (At least, not until we took additional steps to up Phil’s visibility.) If you’ve never tinkered with the “Edit Options” button on your Most Recent feed, this underscores why you should check it out—there’s a little-used setting that caps the number of friends shown in the feed.  Can you “stalk” your way into a friend’s news feed by obsessively viewing their page and photos?

5. “Stalking” Your Friends Won’t Get You Noticed. Maybe you’ve fretted about it while poring over photos of an old flame or estranged friend on Facebook—or maybe you’ve diligently worked to get on someone’s radar by clicking all over their page. Do Facebook’s mysterious algorithms factor your stealthy interest in another person into that person’s news feed?  To find out, our test subject spent several days obsessively checking out the posts and photos of some volunteers who had yet to spy him in their feeds. The result was clear: The stalking accomplished precisely nothing.

6. Having Friends Who Stalk You WILL Help Your Popularity. Stalking does work in the other direction, we found. After Phil spent days posting updates in vain, with most of our volunteers seeing none of them, we tasked a handful of friends to start showing more interest in Phil. Even though he wasn’t showing up in their feeds, they sought out his Facebook page repeatedly, clicking on links he had posted and viewing his photos. This was the point at which Phil finally began to break through. It took a few days of constant clicking, but not only did the friends doing the stalking begin to see Phil in their Top News feeds—others who weren’t stalking began noticing him as well.

7. Links Trump Status Updates. We’re sure you consider all of your musings fascinating—but Facebook doesn’t. At various points in our test, Phil switched between writing plain status updates and posting links to content elsewhere on the Web. Even before some of our friends began stalking Phil, for those who were seeing updates from him, links appeared more frequently than status updates—presumably because links are more effective at driving “user engagement,” which translates into people spending more time on Facebook.

8. Photos and Videos Trump Links. Just as links proved more potent than status updates in making it past Facebook’s filter, so did photos and videos Phil posted. Here, too, it is likely a matter of engagement. Think about times you’ve spotted a thumbnail-size photo from a friend in your feed and clicked to see it full-size. Facebook likes clicks, and photos deliver them.

9. The Power of Comments. If items you post attract comments from a few friends, it clearly raises your visibility overall. When our selected volunteers began stalking Phil, he finally appeared to many users for whom he had been a no-show. But when we stopped the stalking and moved on to the next phase of our trial, directing a different group of users to not only look in on Phil but also repeatedly add comments to his items, he surfaced on the feeds of still more friends.

10. Why Facebook Really is Like High School: After weeks of testing and trying everything from having Phil post videos to getting some of his friends to flood him with comments, by the end of our experiment, a few of our volunteers had still literally never seen Phil appear in their feeds, either Top News or Most Recent. These were the “popular kids”—users of Facebook with 600 or more friends. (Conversely, those with only 100 to 200 friends were among the first to spot Phil.) So the key, as you build your coterie of friends, is making sure to include some without huge networks. They’ll see more of your feeds, interact in Facebook-approved ways, and up your visibility with all.

Facebook didn’t respond to our requests for comment about our findings. To be sure, this experiment wasn’t foolproof. Facebook can—and probably does—draw on variables beyond those in our test. And our volunteer force of friends was only human, and may have missed some of Phil’s posts.  Still, we were able to observe firsthand how Facebook can elevate or bury the news you want to share with your friends. For average users, cracking the Facebook code is something of a fun puzzle. But for marketers trying to tap Facebook—or individuals who see the service as a way to promote themselves—understanding how content propagates through the system is anything but a game.  But it also means that many users may not be aware of how much power they’ve put in the hands of this electronic mediator. (The very concept of the news feed was controversial as soon as it was unveiled, as chronicled in David Kirkpatrick’s The Facebook Effect.)  You might think you’ve shared those adorable new baby photos or the news of your big promotion with all of your friends. Yet not only does Facebook decide who will and won’t see the news, it also keeps the details of its interventions relatively discreet.