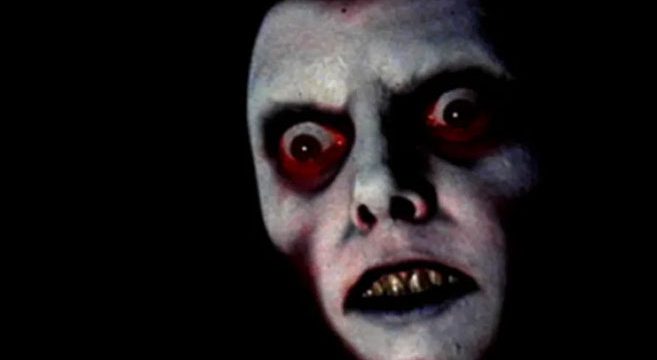 Regarded as a triumph of the horror genre, William Friedkin’s “The Exorcist” (1973) is still scaring the bahjeezus out of almost everyone who sees it.  The story starts at an archaeological dig in Iraq.  Father Lankester Merrin (Max von Sydow), an archaeologist, visits a site where a small stone is found, resembling a grimacing, bestial creature. Merrin travels onward to find the strange statue of Pazuzu, which has a head similar to the one found earlier.  Meanwhile, another priest, Father Damien Karras (Jason Miller), a young priest at Georgetown University in Washington, D.C., begins to doubt his faith while dealing with his mother’s terminal illness.

The main story follows Chris MacNeil (Ellen Burstyn), an actress filming in Georgetown, who notices dramatic and dangerous changes in the behavior of her 12-year-old daughter, Regan MacNeil (Linda Blair). Regan has a seizure, then exhibits strange, unnatural powers including levitation and great strength. Regan curses and blasphemes in a demonic male voice. Chris initially believes Regan’s changes are related to puberty, but doctors suspect a lesion in her brain. Regan endures a series of unpleasant medical tests. When X-rays show nothing out of the ordinary, a doctor advises that Regan be taken to a psychiatrist, whom she assaults. Paranormal occurrences continue, including a violently shaking bed, strange noises, and unexplained movements. Along with these things, the director of Chris MacNeil’s film, Burke Dennings (Jack MacGowran), is found brutally murdered outside the MacNeil residence.

When all medical explanations are exhausted, a doctor recommends exorcism, suggesting that if Regan’s symptoms are a psychosomatic result of a belief in demonic possession, then perhaps an exorcism would have the psychosomatic effect of ending them. In desperation, Chris consults Karras, since he is both a priest and a psychiatrist. During a period in which Karras observes Regan, Regan refers to herself as the Devil. Despite his doubts, Karras decides to request permission from the Church to conduct an exorcism.

Merrin, an experienced exorcist, is summoned to Washington to help. He and Father Karras try to drive the spirit from Regan. The demon threatens and taunts both priests, both physically and verbally (including the demon using the voice of Karras’ mother), and Merrin dies of a heart attack. Karras attempts to perform CPR to no avail. Regan giggles as Karras tries to save Merrin. Karras strikes her and chokes her, challenging the demon to leave Regan and enter him. The demon does so, whereupon the priest throws himself through Regan’s bedroom window and falls down the steps outside. At the bottom, a devastated Father Dyer (William O’Malley)—and friend of Father Karras—administers last rites as Father Karras dies. Regan is restored to health and does not appear to remember her ordeal. Chris and Regan leave Georgetown and their trauma behind.

The film was an adaption of the 1971 novel of the same name by William Peter Blatty.  The beginnings of the novel came from a 1949 Washington Post article he’d read as a grad student when he was at Georgetown University. The piece ran on August 20, 1949 and told of a 14-year-old boy from nearby Mount Rainier, Maryland, who had undergone an exorcism:

The real account centered around Douglas Deen and began around 1949 in a rural area of Washington DC. The 14 year-old-boy and his family noticed strange noises coming from the walls and ceiling of his room. The suspect was thought to be mice, so an exterminator was called in but the services were unable to stop the weird sounds.  Soon the occurrences became violent. Furniture began to move, pictures jumped from their spots on the walls, and the boy’s bed began to lurch and shake through the night. The Deen family soon sought help from their neighbors. Although these persons at first tried to ignore the disturbances, one night in the house was able to change their minds.  With little else to do, the family called the minister of their local church, Reverend Winston, and asked for his assistance. Spending February 18, 1949, with the young boy, the Reverend found the happenings all too real. He witnessed the shaking of the bed, strange scratches in the walls and the movement of furniture. Afterwards, Douglas was given full physical and psychological tests but they revealed nothing out of the ordinary.  With no other solutions, the family called a Roman Catholic priest to exorcise the demons from the home. The priest performed the ceremony thirty times and stayed with the Deens for over two months. During this time, the boy would scream in strange voices and shake violently. Finally, later that spring, the family and priest felt the exorcisms had worked and the demons had been driven away.

The story that inspired the film has been referred to by one historian as such: “It makes the film look like kindergarten.” Read more about the 1949 Douglas Deen case at CBS News.

Exorcism (from Late Latin exorcismus, from Greek exorkizein – “to bind by oath”) is the practice of evicting demons or other spiritual entities from a person or place which they are believed to have possessed by causing the entity to swear an oath. The term became prominent in early Christianity from the early second century onward as the casting out of demons.  The practice itself is beyond ancient, and is part of the belief system of many cultures and religions including Christianity, Judaism, Islam, Hinduism, and Buddhism.