The Story Of The Romanov Dynasty And The Fabergé Egg

I’ve always had a deep fascination with the history of the Fabergé Egg.  I remember back in the late 90s I went to the Forbes Gallery in NYC where they have a stunning collection of them and I was blown away.  I thought I’d share with you this little bit of history about the history of the Eggs and their place in the history of jewelry:

A Fabergé Egg is any one of the thousands of jeweled eggs made by the House of Fabergé from 1885 through 1917. The majority of these were miniature ones that were popular gifts at Eastertide. They would be worn on a neck chain either singly or in groups.

The most famous eggs produced by the House were the larger ones made for Alexander III and Nicholas II of Russia. Of the 50 made, 42 have survived. The eggs are made of precious metals or hard stones decorated with combinations of enamel and gem stones. The term “Fabergé egg” has become a synonym of luxury and the eggs are regarded as masterpieces of the jeweller’s art. The Fabergé Imperial Easter Eggs are regarded as the last great series of commissions for objets d’art.

The story began when Tsar Alexander III decided to give his wife the Empress Maria Fedorovna an Easter Egg in 1885, possibly to celebrate the 20th anniversary of their betrothal. It is believed that the Tsar’s inspiration for the piece was an egg owned by the Empress’s aunt, Princess Wilhelmine Marie of Denmark, which had captivated Maria’s imagination in her childhood. Known as the Hen Egg, it is crafted from gold. Its opaque white enamelled ‘shell’ opens to reveal its first surprise, a matte yellow gold yolk. This in turn opens to reveal a multi-coloured gold hen that also opens. It contains a minute diamond replica of the Imperial Crown from which a small ruby pendant was suspended. Unfortunately, these last two surprises have been lost.

Empress Maria was so delighted by this gift that Alexander appointed Fabergé a ‘goldsmith by special appointment to the Imperial Crown’. He commissioned another egg the following year. However, after that, Peter Carl Fabergé, who headed the House, was apparently given complete freedom for future Imperial Easter Eggs, as from this date their designs become more elaborate. According to the Fabergé family tradition, not even the Czar knew what form they would take: the only stipulation was that each one should contain a surprise. Following the death of Alexander III on November 1, 1894, his son presented a Fabergé egg to both his wife, the Empress Alexandra Fedorovna, and to his mother, the Dowager Empress Maria Fedorovna.

No eggs were made for 1904 and 1905 because of the Russo-Japanese War. Once an initial design had been approved by Peter Carl Fabergé, the work was carried out by an entire team of craftsmen, among them Michael Perkhin, Henrik Wigström and Erik August Kollin.

During the first months of Russia’s involvement in World War I, the simmering discontent of the troubled nation was cooled by patriotic unity in defense of the motherland. But Russia’s dismal economic conditions made it impossible for Nicholas to sustain the war effort against powerful, industrialized Germany. By 1917, famine threatened the country. Riots and strikes demanding bread were commonplace in Moscow and St. Petersburg. When the Imperial troops joined the demonstrators, the government collapsed from the revolution. On March 15th, with neither the support of the people nor the aristocracy, Nicholas was forced to abdicate. The next day, a decree was passed ordering the arrest of Nicholas II and all other members of the Romanov family. The Czar and his family were eventually removed to Siberia where they were held captive for over a year.

In the chilly pre-dawn hours of July 17th, 1918, Nicholas and Alexandra, with their five children – Olga, Tatiana, Maria, Anastasia and Alexei – were herded into a basement and executed.

Of the immediate family, only Nicholas’ mother, the Dowager Empress Maria Fedorovna, escaped the assassin’s bullet. As she made a hasty departure from her homeland, she brought with her the Order Of St. George Egg, the last Fabergé Imperial Easter egg she ever received from her son Nicholas, once Czar of all the Russias.

You can read more about the fascinating history of the Eggs at PBS. 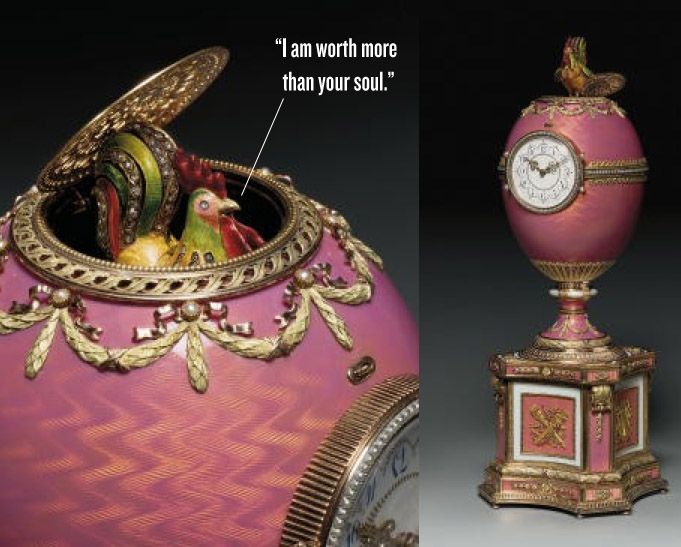