When Vanity Fair‘s Michael Lewis went to Greece to dig deeper into the clusterfuck that is the Greek economy he had no idea just how clusterfucked it actually is.  As a matter of fact, “clusterfuck” would be generous.  Take every bad piece of news you’ve heard about the Greek financial mess over the past year or so and put it into a grain of sand.  Then take that grain of sand and throw it on top of a massive pile of clusterfucked sand, and that is the real Greek financial situation.  Soon after arriving in Greece he began to realize the immense scale of the corruption and financial decay that existed in the country:

I’d sit down with someone who knew the inner workings of the Greek government: a big-time banker, a tax collector, a deputy finance minister, a former M.P.   I’d take out my notepad and start writing down the stories that spilled out of them. Scandal after scandal poured forth. Twenty minutes into it I’d lose interest. There were simply too many: they could fill libraries, never mind a magazine article.

The people Lewis meets assume it’s common knowledge that the only people who pay taxes are salaried employees who can’t avoid them. Bribing anyone in the employ of the state is a way of life.  As a case study, Lewis focuses on some formerly penniless monks who parlayed a worthless lake into a commercial property empire, and eventually brought down the Greek government in doing so — prompting the new administration to come clean about the scale of Greek’s deficits.

But the devil really is in the human-sized details:

– If you divide the nation’s debt, each Greek owes $250,000.
– The Greek public sector wage bill has doubled, in real terms, in just the past decade.
– The State railroad is so inefficient and bust it would be cheaper to put all Greece’s rail passengers into taxicabs.
– Retirement age for those in “arduous” jobs is 55 for men and 50 for women; and some 600 professions have acheived such status, including hairdressers, musicians, and radio announcers.
– Greek schools are poorly ranked in European terms, yet have four times as many teachers as highest-ranked Finland.
– An oldie, but worth repeating: 2/3 of Greek doctors report incomes under 12,000 euros a year.  Plastic surgeons making millions pay no tax.
– The black market that’s invisible to the tax system is estimated at between 30-40% of the Greek economy, compared to about 18% across Europe.

On and on it goes. Billions not paid in taxes here, billions fudged by the Greek Government there, and pretty soon you’re talking serious money.  The only people Lewis gives credit to are Greek bankers, who proved among the most conservative in Europe. In Greece, Lewis says, the banks didn’t sink the country — the country sank the banks.

The incoming Greek minister of finance who finally fessed up to the scale of his country’s problems, George Papaconstantinou, has a simple answer as to how the deficit was hidden for so long:

“We had no Congressional Budget Office,” explains the finance minister. “There was no independent statistical service.” The party in power simply gins up whatever numbers it likes, for its own purposes.

Lewis even quotes Papaconstantinou as saying that traditionally, the first thing a government does in an election year is to pull the tax collectors off the streets.  On the other hand, the yield on Greek debt is now almost back to where it was at the height of the crisis. Observers seem to think the best we can hope for is that Greece defaults at a time when Europe’s finances are better placed to withstand it.

“The structure of the Greek economy is collectivist, but the country, in spirit, is the opposite of a collective. Its real structure is every man for himself.  Into this system investors had poured hundreds of billions of dollars. And the credit boom had pushed the country over the edge, into total moral collapse.”

So much for the birthplace of democracy.  To make things worse, a Bloomberg interview that was published today quoted billionaire investor George Soros’s concerns that all of Europe may be headed for “deflationary spiral.”  Germany is the real powerhouse of the European economy and it is in the midst of implementing a heavy set of austerity measures.  Soros explained in a speech at Columbia University that “deficit reduction by a creditor country such as Germany is in direct contradiction of the lessons learned from the Great Depression of the 1930s.”  When both creditor and debtor countries reduce their deficits amid high unemployment they “set in motion a deflationary spiral in debtor countries. It is liable to push Europe into a period of prolonged stagnation or worse.”

Here’s my analogy: imagine you’re a dog walker and you have 16 big dogs that are essentially all pulling you in different directions.  You have three choices: 1) stand in one spot and wait to die, 2) let the dogs run away, or 3) wait for the dogs themselves to die.  From the picture that Michael Lewis is painting, it appears as if Greece may be one of the unfortunate dogs.

You can read the full (and very long) article at Vanity Fair. 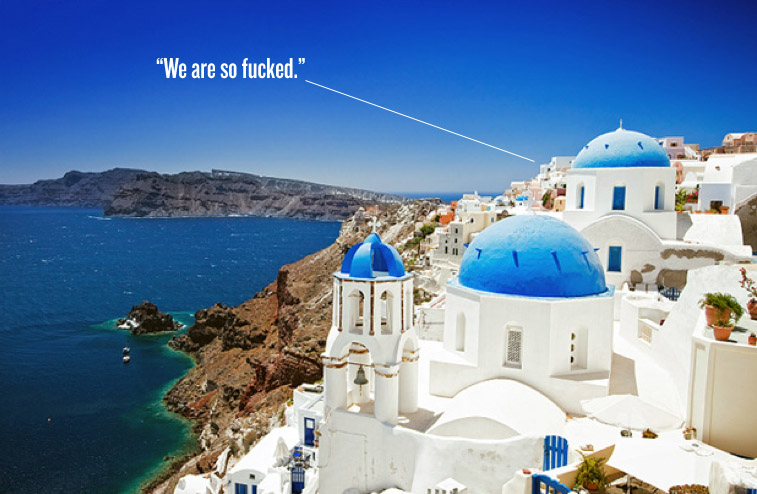