The sun in Las Vegas is a powerful beast.  I honestly don’t know how anyone can live there.  The MGM Vdara Tower is no exception to Nevada’s relentless heat, and is actually making things much worse as a guest recently discovered while sitting poolside.  The building’s curved facade of polished mirror has inadvertently become a “death ray” at certain times of the day.  Here’s what happened to him:

Chicago visitor Bill Pintas experienced Vdara’s “death ray” recently. A lawyer, he was here on business for Preferred Capital Lending, which he co-owns. He also co-owns a Vdara condo.  Pintas told the Review-Journal that at midday Sept. 16, after a brief dip in the hotel pool, he was sunning on a recliner. He was on his stomach, relaxed, eyes closed.  But suddenly, the lawyer became so uncomfortably hot that he leaped up to move. He tried to put on his flip-flop sandals but, inexplicably, they were too hot to touch. So he ran barefoot to the shade.  “I was effectively being cooked,” Pintas said. “I started running as fast as I could without looking like a lunatic.”  Then he smelled an odor, and realized it was coming from his head, where a bit of hair had been scorched. It was about 12:20 p.m., as best Pintas can recall. 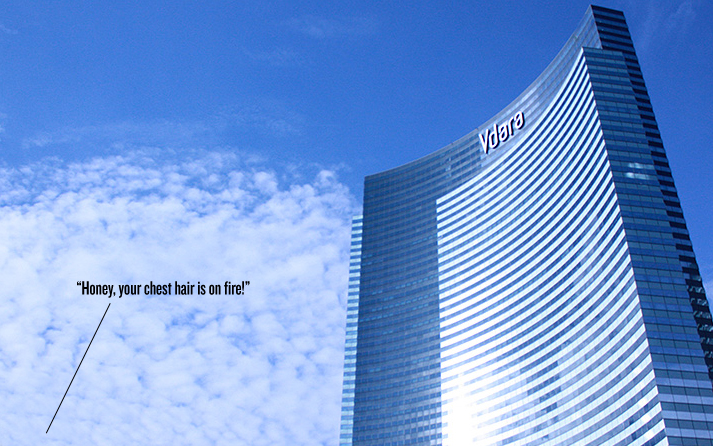