My friend Francoise just sent me this article featuring Antony Gormley’s latest sculpture installed in the Dutch city of Lelystad.  Worth noting is that the sculpture began as a cast model of himself:

One of Antony Gormley‘s most intricate sculptures to date, a massive, squatting human figure, now stands 25 meters high near the Dutch city of Lelystad. The work, entitled Exposure, is five meters higher than Gormley’s most famous sculpture, Angel of the North, and weighs approximately 60 tons. The figure is composed of 5,000 hand-cut metal rods, each of a different length, and fastened with 14,000 bolts. The artist spent more than five years planning and creating the gargantuan figure, which would measure 100 meters tall if standing fully-erect. Like most of Gormley’s works, the figure began as a cast model of himself, and was expanded to its site-specific proportions. Visitors standing next to the sculpture reach only as high as the figure’s feet. One of the principle features of the piece is its transparency, which lends it a quality insubstantiality despite its enormous size. “I think of him as a constellation. You can think of these nodes as starbursts within the body. He is not struggling, he is simply contemplating the horizon, contemplating space at large, but he is himself space at large. It is not easily understood — you have to walk around it, walk underneath and even climb it,” Gormley said in a recent interview with The LondonTimes. 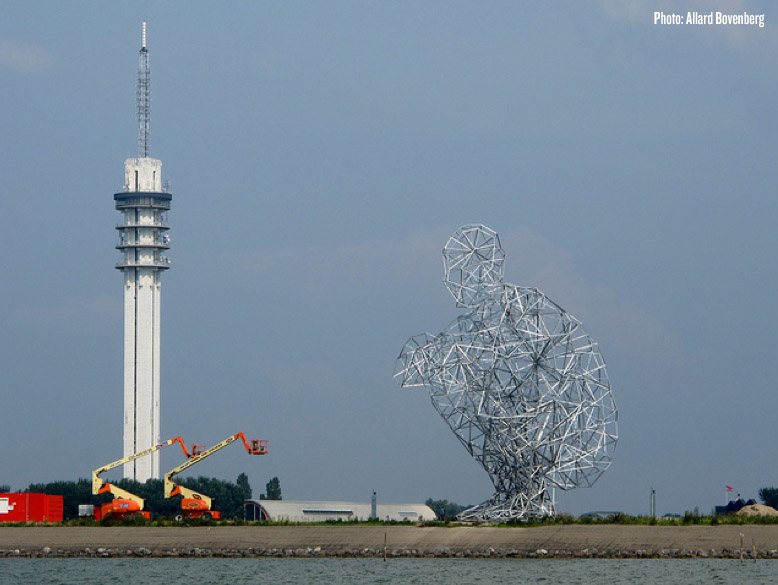 Previous post:
New Glenn Gould Documentary Hailed As “Tour De Force” In New York Times Review Next Post:
Ariel Pink’s Haunted Graffiti “Round And Round” (From Their Album ‘Before Today’)