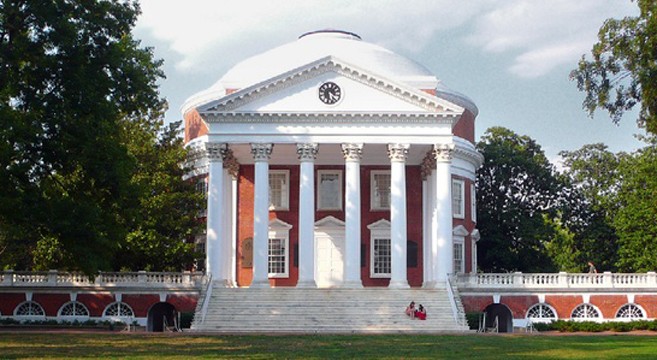 Inside The Godhead X-FILES: The Univ. Of Virginia Has A Prestigious Paranormal Lab Just Like X-MEN

Novelist P.L. Travers once wrote, “More and more I’ve become convinced that the great treasure to possess is the unknown.”  Wise words from a woman who understood that nothing can enliven and awaken our experience, perception, and interaction with the Universe around us more fully than by having a healthy abundance of awe, wonder, and appreciation of the mysterious.

Throughout history and our collective civilization, we have invented several vessels with which to explore the realm of the mysterious — whether it be our vessels of language, art, religion, storytelling, science, spirituality, and others.  No exploration as ambitious as this can be entirely free of contradictions or pushbacks.  Take for instance the recent debate on the topic of evolution vs. creationism which took place between Bill Nye and Creation Museum founder Ken Ham.  Nye, who understands the Earth is several billions of years old, was up against a dim Ham who thinks our planet formed 6,000 years ago.  When each was asked by the moderator what would it take for each of them to be convinced of their counterpart’s claim, Nye wisely replied: “Evidence.”  Ken Hamm returned with a one-word answer that sums up the most sinister attitude of all dogmatic and fundamentalist religions: “Nothing.”

Albert Einstein would have been disappointed in Ham’s closed-mindedeness, but certainly not surprised that Ham is completely missing out on the wondrous beauty that can emerge when non-dogmatic religion meets and open mind.  After all, Einstein once said: “The most beautiful thing we can experience is the mysterious.  It is the source of all true art and science.  He to whom the emotion is a stranger, who can no longer pause to wonder and stand wrapped in awe, is as good as dead — his eyes are closed.  The insight into the mystery of life, coupled though it be with fear, has also given rise to religion.  To know what is impenetrable to us really exists, manifesting itself as the highest wisdom and the most radiant beauty, which our dull faculties can comprehend only in their most primitive forms — this knowledge, this feeling is at the center of true religiousness.”

Although religion was created as a means to explore the greatest questions known to man, some branches have atrophied to the point where none of these most profound questions are even allowed to be asked.  Why is it that so many of these religious institutions which claim to have all the answers, never allow anyone to ask any questions?  This type of fundamentalism is, of course, non-existent in the world of science, and there is a fascinating and renowned group of scientists who have been exploring thousands of the most astonishing and mysterious experiences that have ever been documented in modern history.

Nowhere is this exploration taken more seriously and with more scientific rigor than at the prestigious Division of Perceptual Studies (DOPS) at the University of Virginia’s School of Medicine.  Founded in 1967 by Dr. Ian Stevenson, its mission is “the scientific empirical investigation of phenomena that suggest that currently accepted scientific assumptions and theories about the nature of mind or consciousness, and its relation to matter, may be incomplete.”  The brilliant research teams at DOPS have conducted thousands of research studies into cases that involve: ESP, poltergeists, near-death experiences, out-of-body experiences, claimed memories of past lives, and more.

One part Mulder and Scully from X-FILES, and one part Professor X’s School for Gifted Youngsters from X-MEN, The University of Virginia’s Division of Perceptual Studies is one of the world’s most highly respected institutions investigating the paranormal, and a number of their cases continue to baffle even the most senior scientists on its team.  One of DOPS’ most famous cases was headed by Dr. Jim Tucker, a Bonner-Lowry Associate Professor of Psychiatry and Neurobehavioral Sciences, who studied a 2-year-old boy from Louisiana named James Leininger.  In an interview with NPR‘s Rachel Martin last month, Tucker told the story of this little boy’s brush with the unknown.  Jake Flanagin of Scientific American writes:

“[We studied James Leininger], a Louisiana boy who reported memories of flying a fighter jet in World War II. At around age 2, James experienced terrible nightmares, almost nightly, of violent plane crashes. During the day, he relayed extremely vivid memories of this supposed Air Force career.  He recalled the name of a real aircraft carrier stationed in the Pacific during World War II (‘Natoma’).  He claimed to have a friend on the boat named Jack Larsen.  He had memory of being shot down by the Japanese and dying near Iwo Jima.  The USS Natoma Bay lost only one pilot at Iwo Jima, a man named James Huston, and he died in a crash that matched Leininger’s description almost exactly: ‘Hit in the engine, exploding into fire, crashing into the water and quickly sinking,’ Tucker said.   ‘And when that happened, the pilot of the plane next to his was Jack Larsen.’  Spooky, right?  Surely little James was merely parroting information he had absorbed elsewhere.  ‘Children’s brains are like sponges,’ the saying goes, but Tucker’s findings suggest something more profound at work.  For one thing, James Huston is simply not a well known person.  A cursory Google search of his name reveals only press related to Leininger’s claims.  It’s hard to say how Leininger or his parents could have possibly known anything about Huston before the nightmares began.  Huston’s story is so obscure that it took Leininger’s father three to four years to track down his information.  James Huston was killed more than fifty years before James Leininger’s birth, and came from Pennsylvania — more than a thousand miles from the Leininger family home in Louisiana.  What’s more, James Leininger was only two years old when he first reported memories of Huston’s fiery death.  ‘It seems absolutely impossible that he could have somehow gained this information as a 2-year-old through some sort of normal means,’ Tucker told NPR.”

Using the same scientific techniques, and inspired by the same motivations as the researchers of NASA or the World Health Organization, the scientists at DOPS are rigorous in their collection and analysis of data.  Acclaimed American psychiatrist Harold Lief praised DOPS’ scientific method in a feature written for The Journal of Nervous and Mental Disease : “While I withhold final judgment on the content and conclusions of [their studies] of telepathy, xenoglossy, and reincarnation, I am a true believer in [DOPS’] methods of investigation. [The researchers] are methodical and thorough [with their] data collection, and clear and lucid in their analysis and presentation.”

Bruce Greyson is another scientist at the DOPS lab, who, for the past three decades, has specialized in the lab’s studies of near-death experiences.  Greyson tells the University of Virginia magazine: “Over those three decades, Greyson, who directs the Division of Perceptual Studies, has witnessed an evolution in our knowledge about near-death experiences.  ‘Back in the early 1980s, when we would present information about these experiences at medical conferences, after the conference was over doctors would come to us individually and say, ‘I had one of these experiences. Let me tell you about it.’ ‘  Several factors made them reluctant to speak publicly.  The experiences are intensely private, and people had yet to learn how common they were.  In addition, the field of study had yet to gain wide acceptance.  As knowledge has grown, reticence has waned.  ‘Now they’re more willing to say that during the conference in front of an audience,’ Greyson says.  About one person in 20 has reported having a near-death experience, according to one study.  The International Association for Near-Death Studies estimates that 12 percent of people who have had a close brush with death will later report having a NDE.”

“The power of the experience often is life-altering,” Greyson adds.  “Fear of death vanishes.  Love of life blossoms.  Spirituality strengthens.  Compassion and connectedness become central principles.  [Experiencers] feel they’re part of something greater than themselves.  They feel that they’re all part of this universal whatever you want to call it — nature, the Godhead,” Greyson says.

“Though the research is modern, the phenomenon is ancient.  The afterlife has fascinated mankind since he was wrapped in the swaddling clothes of civilization.”  Greyson continues: “Science is my game.  I can understand that there are philosophical or theological ways of approaching this, but that’s not my interest,” he explains.  “My interest is in the scientific understanding of it.”  You can read more of Greyson’s fascinating insights by visiting UVAmagazine.org.   Walter Semkiw, M.D., an associate with the Institute for the Integration of Science, Intuition and Spirit (IISIS) has compiled an impressive collection of past-lives case studies from the halls of DOPS, and you can read them in full by visiting IISIS.net.

The Division of Perceptual Studies at the University of Virginia’s School of Medicine will soon celebrate its 50th anniversary in 2017, and even after five decades, the wisdom of its founder, Dr. Ian Stevenson, still rings true to this day with his now famous statement: “The wish not to believe can influence as strongly as the wish to believe.”  In keeping with Stevenson’s wisdom of openness to the unknown, it seems all too fitting for the team at DOPS to have a similar quotation on their website’s headerboard from President Thomas Jefferson, the man who founded, conceived, and designed the University of Virginia in 1819.  “I was bold in the pursuit of knowledge,” said Jefferson in 1812, “never fearing to follow truth and reason to whatever results they led.”

To learn much more about Biocentrism, the theory that elegantly explains the afterlife, the human soul, near death experiences, and the great beyond, be sure to read: “Revolutionary Theory Of Biocentrism Unlocks The Mysteries Of Consciousness, The Soul & The Afterlife“.  And be sure not to miss Anita Moorjani’s personal recollection of her own near death experience in the video below.  It’s one of the most remarkable true stories you will ever hear.  And if that isn’t enough for you, then watch this: “The WOW Files: Astonishing Video Shows Healer Demonstrating His Jedi-Like Chi Superpowers At Work“.

Previous post:
My Newest Favorite Dream Home Is The “K House” In Sydney Harbour By Chenchow Little Architects Next Post:
Sex, Love, And Sochi: Olympians Talk Openly About The Massive Amount Of Sex Happening At The Games