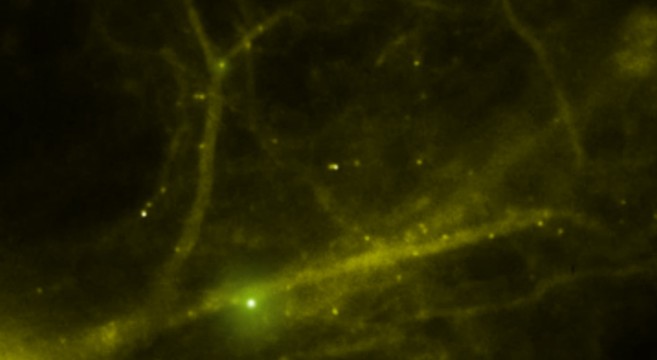 Every part of the human body is in a constant state of regeneration, but the brain is one of the fastest to regrow itself.  Every two months the cells of your brain are 100% replaced with new ones, which means that over the course of one year you will have regenerated your brain 6 times.  At 38-years-old, this means my own brain has regenerated itself 228 times.  But even more astonishing than this is the fact that my oldest memories remain perfectly preserved, and will remain so for years to come, even as my brain is in a constant state of change and regeneration.  Brain scientists have been trying forever to unlock the mysterious mechanics of how this is possible, with new clues coming in all the time.  The newest of which has set the entire neuroscience community abuzz.

In the January 24th issue of Science, researchers at the Albert Einstein College of Medicine have unveiled an astonishing technique which allows them to watch molecules morph into memories inside neurons.   In order to achieve this, the researchers created a mouse model in which they fluorescently tagged all molecules of the animal’s messenger RNA (mRNA) that code for beta-actin protein — an essential protein found in large amounts inside brain neurons — and a major player in the formation of memories (mRNA is a family of RNA molecules that copy DNA’s genetic information and translate it into the proteins that make life possible).  When researchers stimulated neurons of the mouse’s hippocampus (where memories are made and stored) they could watch as the glowing beta-actin mRNA molecules formed inside the nuclei of the neurons and moved around inside the dendrites (the long branch-like projections of the neuron).  The next biggest discovery came when the team realized that mRNA inside neurons is adjusted/regulated in a process of “masking” and “unmasking”, which governs the infinite variety of possible times, places, and amounts of beta-actin protein synthesis (very much like a computer uses zeroes and ones to process, code, and store information).

You can watch the remarkable video footage from the researchers below, as well as watch Charlie Rose’s one-hour special on consciousness.  For more great stories from the world of the human brain be sure to visit The Human Brain on FEELguide.

SEE ALSO: Revolutionary Theory Of Biocentrism Unlocks The Mysteries Of Consciousness, The Soul & The Afterlife
SEE ALSO: Fascinating New Smartphone App Decodes The Patterns And Hidden Meanings Of Your Dreams
SEE ALSO: Biophotons: The Coherent Light Particle In Every DNA Responsible For Intercellular Communication And Barometer Of A Living Organism’s Health

Previous post:
If Your Life Is Going To Shit, This Is The One Thing You Need To Do To Turn It All Around Next Post:
Watch Nils Frahm’s Black & White Watercolor Video For His Mindblowing Track “Says”