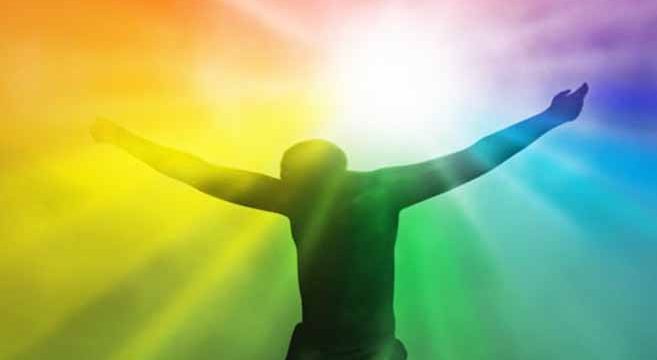 Eckhart Tolle On Christmas, Consciousness, The “Christ Within,” And The One Absolute Truth

No one has had a stronger influence in shaping the spiritual dimension of my life more than Eckhart Tolle. His elegant application of centrifugal force to Christianity, Zen Buddhism, Islam, Taoism, Judaism, Sufism — just to name a few — results in the universal truth at the heart of all spiritual teachings known to man. Tolle imagines the great religions as ships scattered around an ocean, each pointed in exactly the same direction. Most of these ships, however, have accumulated so much extraneous theology, doctrines, and “beliefs” over the course of several centuries that they’ve jeopardized their respective journeys entirely.

The largest of these ships is Christianity, and each December 25th approximately 2.2 billion people around the world will in some form or another be celebrating the birth of Jesus Christ. And with good reason. Jesus was clearly an incredible human being — a champion of compassion, peace, tolerance, unconditional love, and The Truth. He never claimed to be the sole possessor of this Truth, but over the past two thousand years, something has changed. Eckhart writes: “In the history of Christianity, if you believe you are the sole possessor of the truth then that belief has the power to corrupt your actions, even to the point of insanity — whether it’s the Catholic Inquisition or a big shopping spree. The Truth is inseparable from who you are. If you look for it in ideas, beliefs, or even gifts from the store, you will be deceived every time. The true meaning of Christmas is that the very Being that you are is Truth. This is what Jesus meant when he said, ‘I am the way and the truth and the life.’  Jesus speaks of the inner essence identity of every human being. Some Christian writers call this the ‘Christ within’. The real meaning of Christmas is to find that essential self that is universally experienced as the Christ within no matter what your cultural or religious upbringing is. As we approach the ceremonial date of the birth of Christ and as many of you gather with friends and family, perhaps standing in the silence of the Christ within can keep bringing you back to Being – the eternal life that Christ promised human kind.”

Eckhart believes, as I do, that Jesus had an incredibly powerful message that heaven is not a location, but refers to the inner realm of consciousness. In his book A New Earth, Tolle writes: “This is the esoteric meaning of the word ‘heaven’, and this is also its meaning in the teachings of Jesus … The Catholics and other churches are actually correct when they identify relativism, the belief that there is no absolute truth to guide human behaviour, as one of the evils of our times; but you won’t find absolute truth if you look for it where it cannot be found: in doctrines, ideologies, sets of rules, or stories. What do all of thse have in common? They are made up of thought. Thought can at best point to the truth, but it never is the truth.”

“There is only one absolute Truth, and all other truths emanate from it. When you find that Truth, your actions will be in alignment with it. Human action can reflect that Truth, or it can reflect illusion. Can the Truth be put into words? Yes, but the words are, of course, not it. They only point to it. The Truth is inseparable from who you are. Yes, you are the Truth. If you look for it elsewhere, you will be deceived every time. The very Being that you are is Truth. Jesus tried to convey that when he said, ‘I am the way and the truth and the life.’ These words uttered by Jesus are one of the most powerful and direct pointers to the Truth, if understood correctly. If misinterpreted, however, they become a great obstacle.”

“Jesus speaks of the innermost I Am, the essence of identity of every man and woman, every life-form in fact. He speaks of the life that you are. Some Christian mystics have called it the Christ within; Buddhists call it your Buddha nature; for Hindus, it is Atman, the in-dwelling God. When you are in touch with that dimension within yourself — and being in touch with it is your natural state, not some miraculous achievement — all your actions and relationships will reflect the oneness with all life that you sense deep within. This is love. Laws, commandments, rules and regulations are necessary for those who are cut off from who they are, the Truth within.  They prevent the worse excesses of the ego, and often they don’t even do that. ‘Love and do what you will,’ said St. Augustine. Words cannot get much closer to the Truth than that.” 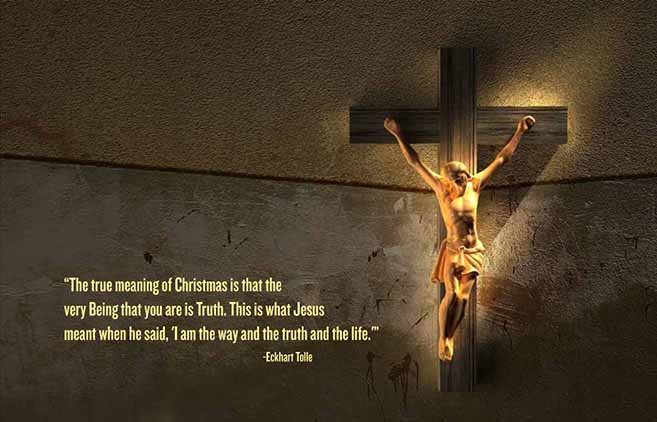