They certainly know how to produce the greatest works of art, architecture, and music, but when it comes to theory, the Vatican this week has once again proven itself to be so completely out of touch with reality that I find myself asking: “How many more times does this organization have to make an absurd pronouncement before its followers rightfully throw in the towel?”  10?  100?  1000?

In their latest of a long string of outrageous claims, the Vatican’s own chief exorcist Gabriele Amorth was quoted by The Telegraph telling an audience that yoga leads to a belief in Hinduism, and “all eastern religions are based on a false belief in reincarnation.”  The elderly priest, speaking at a film festival screening in Italy, said: “Practising yoga is Satanic, it leads to evil just like reading Harry Potter.”  Amorth’s views may seem extreme, but they mirror previous warnings by Pope Benedict XVI, when as Cardinal Joseph Ratzinger he was the head of the Congregation for the Doctrine of the Faith, the Vatican’s enforcer of doctrinal orthodoxy.  In 1999, six years before he succeeded John Paul II as Pope (although I’m tempted to replace the word “succeeded” with “failed” considering how amazing a man Pope John Paul II was), he issued a document which warned Roman Catholics of the dangers of yoga, Zen, transcendental meditation and other “eastern” practises.  They could “degenerate into a cult of the body” that debases Christian prayer, the document said.  Yoga poses could create a feeling of well-being in the body that are in opposition to “the authentic consolations of the Holy Spirit,” the document said (uhhhmmm, EXCUEEZE ME?!!!)

Italian yoga schools said Father Amorth’s criticism was outrageous.  “It’s an accusation that has nothing to do with reality,” Vanda Vanni, the founder of the Mediterranean Yoga Association, told Adnkronos, an Italian news agency.  “It’s a theory — if one can call it a theory — that is totally without foundation. Yoga is not a religion or a spiritual practise.  It doesn’t have even the slightest connection with Satanism or Satanic sects.” Giorgio Furlan, the founder of the Yoga Academy of Rome, said yoga had nothing to do with religion, “least of all Satanism.  Whoever says that shows that they know absolutely nothing about yoga,” he said.  Furlan stops short of what I would have said: “Whoever says that shows that they know absolutely nothing about love, compassion, peace, or enlightenment.”

You can read the entire article by visiting The Telegraph.  It astounds me how much nonsense Catholics are willing to put up with from their leadership.  And I must say, it’s not the words of Pope Ratzinger that shock me (he’s been out to lunch since day one), rather the endless amount of tolerance that Catholics seem to have for these kinds of appalling proclamations.  Way to go, Vatican: after 2,000 years you’ve successfully managed to flip the message of Jesus Christ completely inside out and bass-ackwards.  If the Big J.C. were here he’d probably smack you all upside the collective head with a holy fish until you understood the true meaning of his message: that heaven is not a patch of real estate in the sky that we are ziplined up to when we die — HEAVEN IS ENLIGHTENMENT.  Those who work the hardest at this goal end up experiencing this “heaven” while still alive (including J.C. himself, Buddha, Mohammed, and countless others).  The path to true enlightenment is a long one — often taking an entire lifetime — and yoga is one of the most proven and powerful ways to get there.  For the Vatican to not understand this is not only sad, it’s unChristian. 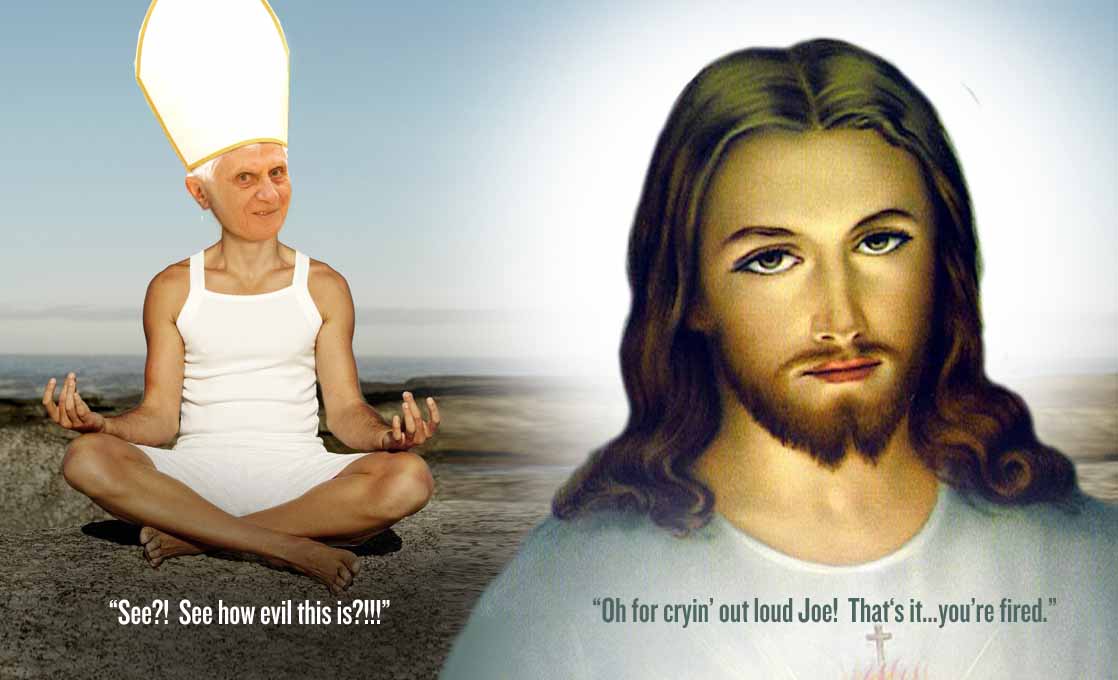 Source: The Telegraph and Newser