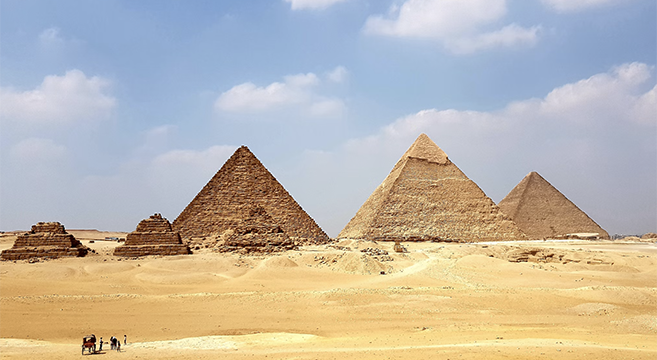 6 Historical Landmarks to See Around the World

One of the biggest remaining neolithic monuments in the world is located in England. Tourists from all over the world are booking their tickets for Stonehenge way ahead because of the great interest this construction is sparking. It’s simply a must-see when visiting England.

Stonehenge is famous for its iconic stone circle, located in Wiltshire, England. It is a prehistoric monument that dates back to 3100 BC and is believed to have been used as a religious site by ancient people. It consists of large standing stones arranged in a circular shape, with smaller stones placed between each one.

There are various theories about Stonehenge’s purpose, but it is generally accepted that it was used for ritualistic or spiritual purposes. Nowadays, it has become a popular tourist destination and an important part of British history and culture. Visiting Stonehenge can be an incredible experience because the scale of the stones and the mystery surrounding their creation make it an inspiring place to visit. If you’re looking for something unique and exciting to do while in England, Stonehenge is definitely worth a visit!

The Great Wall Of China

This ancient strategic construction is a true marvel of human engineering, stretching an astonishing 21,196 km across northern China. The wall was built to protect the Chinese Empire from invading nomadic tribes and has been standing for more than 2,000 years.

The original parts of The Great Wall date back to the 7th century BC during the Qin Dynasty, although much of what stands today was actually constructed in later centuries as part of various ongoing projects. The Great Wall is an incredible feat that showcases the astounding ingenuity of the ancient Chinese civilization so it’s no wonder it’s considered one of the world’s greatest historical landmarks!

Today The Great Wall is open to tourists who can explore its many winding paths and take in its breathtaking views, making it a popular destination for both locals and international visitors. The wall also serves as a reminder of the importance of protecting one’s homeland and has become an iconic, inspiring symbol of China all around the world.

There are various reasons why the Taj Mahal is so popular. These are the following:

Overall, the Taj Mahal is one of the most visited historical landmarks in India and all over the world. It stands as a remarkable example of love and beauty that transcends centuries.

New York’s most famous monument, the Statue Of Liberty, is an iconic symbol of freedom. Located on Liberty Island in New York Harbor, it was dedicated in 1886 and welcomed millions of immigrants to the United States. The Statue of Liberty stands 305 feet tall from base to torch and weighs 450,000 pounds. It was a gift from France to commemorate the 100th anniversary of America’s Declaration of Independence.

This statue faces southeast towards the entrance to Upper New York Bay. It has become a worldwide symbol of freedom and democracy, seen as both a beacon welcoming those who enter U.S. borders seeking a better life and a reminder that we all have the right to liberty and justice regardless of race or creed.

Considered one of the most recognizable icons of America, the Statue Of Liberty has been featured in countless films and television shows. It also is a popular tourist attraction as over 4 million people visit each year to catch a glimpse of this historic monument.

Machu Picchu is the remains of an Incan city located in Peru, constructed around the mid-1400s. It was built on an incredibly steep mountain ridge, at a height of more than 7,000 feet above sea level. Machu Picchu is one of the most famous archaeological sites in South America and a popular tourist destination renowned for its breathtaking scenery and mysterious history.

The ruins are believed to have been constructed as an estate for Incan emperor Pachacuti and later abandoned during the Spanish conquest of the area in the 16th century. Machu Picchu has remained largely untouched since that time and provides an important insight into Andean culture before colonization occurred.

The great Egyptian Pyramids of Giza remain one of the most iconic historical monuments in the world. The three famous pyramids, The Great Pyramid of Khufu, The Pyramid of Khafre, and The Pyramid of Menkaure are located on the west bank of the Nile River in Cairo. Built between 2550 BCE and 2490 BCE, they were some of the first monumental structures ever built by ancient civilizations.

The Pyramids are made from limestone blocks transported from nearby quarries and set in place with mortar made from gypsum. The largest pyramid (Khufu’s) was originally 146 meters tall but is now reduced to 138 meters due to its age. The two other pyramids are smaller, but still impressive, each being around 105 meters tall. The three pyramids, along with the Sphinx, remain some of the most recognizable symbols of ancient Egypt.

Historical landmarks are essential monuments of past civilizations and cultures that came before. All these mentioned in the article are worth checking out in person at least once. Make sure to add them to your bucket list!

Previous post:
6 Things You Should Wear When Working In A Hospital Next Post:
7 Amazing Gift Ideas For Your Husband