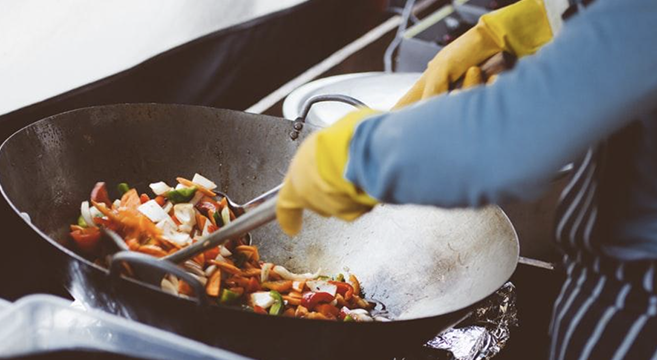 The Low Down on Wok Cooking

Adventurousness in the kitchen encompasses the use of new techniques as well as new ingredients, with East Asian cooking a particular draw for many. The wider availability of woks for home cooking has seen more attempts to learn the secrets of such cooking, and reap the intense flavour rewards that result.

One of the principal techniques that gives wok cooking its best results is known as ‘wok hei’, a Cantonese term which translates roughly to ‘breath of the wok’. Wok hei involves the heating of the wok to extremely high temperatures, where droplets of oil can ignite when brought into contact with the high flames beneath the work. The combination of the scorching-hot wok and occasional licks of flame produces a signature smoky flavour, that is crucial to the taste of many popular Chinese dishes.

The Importance of Seasoning

Achieving proper wok hei is an art – something you will understand if you’ve ever accidentally burnt garlic in a frying pan before… One of the key preparative steps you must take in order to facilitate proper wok hei, or indeed any form of proper wok cooking, is seasoning. In seasoning your wok, you imbue it with a non-stick layer that also protects it from rust.

Whether you’ve bought a new wok or are dusting off an old wok from the back of your cupboard, you will need to season it. New woks often come with a protective film sprayed on, which can be burnt off by heating the wok to high temperature before you begin the process.

Once you have seasoned your pan, caring for your wok is simple. Avoid washing in soapy water where possible, as the soap can destroy the layer you’ve built up; you can either scrub the wok clean with warm water or burn off any food remains.

Previous post:
6 Things That You Have To Do If You Are A Man Suffering From Domestic Abuse Next Post: