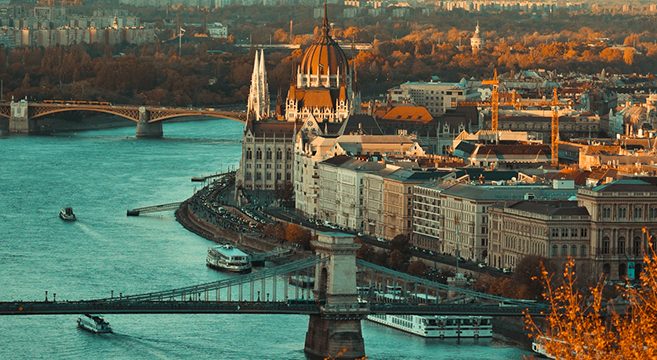 How to Spend a Weekend in Budapest

Budapest is a remarkable city that is finally beginning to get the kind of attention from international tourists that it deserves. Cut into two by the Danube river, the city is known for its two distinct halves: Buda in the West and Pest in the East. It originally found fame with holidaymakers thanks to its naturally occurring thermal waters. Both pleasantly warm and very high in minerals, the waters were found to have healing properties and people would flock to bathe here. Nowadays Budapest has a few more strings to its bow than just the baths, so here’s how to get the most out of a weekend here.

Although there are many incredible historic buildings in Budapest, one of the new ones that will be seeing a lot more tourist footfall this year is the Puskás Aréna. This arena will be playing host to some of the Euro 2020 games that were postponed from last year. Despite the setbacks, there are already some strong opinions on which teams have the best chance. Watching one of the Euro games here might be a bit more expensive than your travel budget allows for, but it’s very reasonably priced to take a tour outside of game time. Of course, if you’re a real football fan then it could be a once-in-a-lifetime opportunity to catch the action on the pitch.

One of the most special things about Budapest is its incredible architecture. The Buda side of the river has the most remaining older buildings, with Castle Hill home to most of them. This area has been designated as a UNESCO World Heritage site and is home to the Fisherman’s Bastion, Sándor Palace, and the seven-hundred-year-old Matthias Church. This building is, as well as being ancient, particularly interesting. It is in the neo-gothic style, but unusually it is decorated with thousands of colorful shingles atop its delicate towers. An afternoon should definitely be spent on Castle Hill, either taking in the buildings or visiting the museums here. It’s possible to walk up to the top, but there is a funicular that runs from the bottom of the hill as well if you aren’t feeling up to the trek. The funicular is very reasonably priced and offers staggering views of the city below.

After a day of sightseeing, you’re probably in need of a drink. Heading over to the Pest side of the river for the evening will guarantee you a livelier time. This side has been somewhat reclaimed by entrepreneurial bar owners over the past couple of decades. The large industrial buildings that were left to crumble have been transformed into what locals know as Ruin Bars. Szimpla Kert is one of the largest and most well-known of the ruin bars and makes the perfect spot to start your night. The bar is made up of lots of little rooms, each with its own character. The center of the bar is a huge open-air courtyard where you’ll often be able to catch a band playing. Grab a glass or two of the local Irsai wine and enjoy the warmth of a Hungarian summer evening here.

One of the most compelling reasons to travel is to try the local cuisine and you will be pleasantly surprised by the food that is available in Budapest, particularly if you happen to leave the ruin bars a little later than planned. Langos is a traditional Hungarian dish of deep-fried bread served with a variety of toppings. You’ll be able to pick up freshly made Langos at any of the little trading carts or tram stations around town. With a chewy donut-like texture, the bread is delicious on its own, but best topped with lashings of sour cream, a sprinkling of grated cheese, and some salty cured lardons. Health food it is not, but as a late-night snack, there is nothing greater.

For your final day in Budapest, it would be crazy not to visit one of the spas that made it famous in the first place. The Széchenyi Baths can be found in the northwest of the city and are the largest and most popular. You can choose to swim outside in the naturally warm pools, or enjoy a sauna experience inside. Entry after midday is discounted, so grab yourself a hearty breakfast beforehand and then settle in for an afternoon of total relaxation.

Photo by Keszthelyi Timi on Unsplash

Previous post:
Amazing Tips And Tricks To Help You Improve Your Cognitive Abilities Next Post:
How To Tweak Your Pet’s Diet To Improve Their Health And Happiness