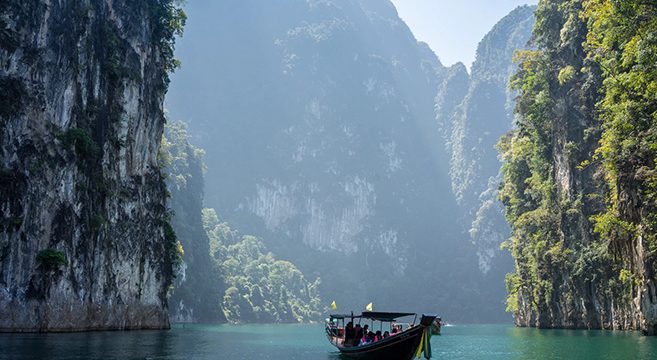 Breathtaking beaches and picturesque palaces—these are probably your reasons for planning a trip to Thailand. But what you might not know, is that this Southeast Asian country has something even more fascinating to offer. Kwao Krua Kao (White Kwao Krua), scientifically called Pueraria mirifica, is commonly used as an elixir in traditional Thai medicine. In fact, for centuries, women throughout Thailand have been relying on this plant to stay young, beautiful, and full of life. No, we’re not kidding at all. Once you’ve spent a bit of time in the country, you’ll notice that locals don’t look their age—and there’s even this sense of pride in telling others how old they actually are. But, how does an herb that’s so widely available manage to accomplish what conventional medicine has failed to do safely? To answer that, we’ll first have to look into how a certain hormone works.

Acting like a key, estrogen activates various processes in the body to maintain a youthful look. It’s through that approach that the hormone keeps skin smooth and supple, specifically by supporting collagen production. It’s also the reason why young women don’t usually think of getting a boob job. By enabling the right kind of tissue production, the hormone makes it possible for the breasts to stay full and firm.

Despite estrogen’s importance, the body unfortunately can’t keep producing it forever. It’s for this reason that those going through perimenopause (typically ladies in their 40s) begin to notice an aesthetic decline in their looks. Fine lines on the face gradually turn into full-blown wrinkles. The breasts, on the other hand, feel less and less dense—a couple more years and they start to visibly sag as well. This is where Pueraria mirifica enters the stage. The herb is loaded with phytoestrogens—plant-derived compounds that mimic the female sex hormone once inside the body.

Think of them as duplicate keys that, while not exactly identical to the original, are still similar enough to provide access to the very same things. So yes, they can switch on things like collagen and breast tissue production. What makes the herb particularly potent, however, is that it contains at least 17 different kinds of phytoestrogens. That makes it more capable of reversing the effects of time than most other sources of these beneficial compounds. Its phytoestrogenic action is so powerful, in fact, that a number of companies around the world found it absolutely necessary to develop anti-aging Pueraria mirifica skincare serums for women.

After all, not doing so is the same as letting the competition get a head start in offering an actual elixir of youth. But of course, if you’re headed to Thailand, you might as well give the more traditional concoctions a try.

More than Youth and Beauty

What makes phytoestrogens, and by extension Pueraria Mirifica, even more impressive is the vast assortment of perks they offer. In other words, they can help in making sure that you get to live your life to the fullest. Intrigued? Here’s a rundown of the other benefits provided by this herb:

Among other problems, estrogen’s decline impairs bone health too. First of all, bone resorption rates go up. This means the body starts breaking down its own bones to get the minerals inside them. As a result, osteoporosis (bone weakness) sets in, raises the risk of fractures, and significantly lowers quality of life. Fortunately, phytoestrogens have been found to prevent the further decline of bone density, once again mimicking estrogen and switching on bone production while dialing down resorption.

Toward a Healthier Heart

Estrogen, with its cardioprotective qualities, keeps the heart healthy. Specifically, it helps reduce bad cholesterol while simultaneously raising good cholesterol levels. With that, you can surely imagine how disastrous things could get once the hormone begins its age-associated decline. So, while menopause itself doesn’t cause heart disease directly, it comes with an increase in the risk of developing the condition. Can phytoestrogens still copy estrogen in this regard? Yes, they can—and once again, it’s something that has already been observed through scientific means. Merely supplementing with these plant-derived compounds for a period of 18 months was enough to significantly raise good cholesterol levels among postmenopausal women; and their bad cholesterol was reduced too.

Given how intertwined estrogen is with the many processes in a woman’s body, it isn’t surprising at all to find out that even sexual satisfaction takes a dive as the hormone’s levels drop. One reason for this is the occurrence of vaginal atrophy—or the thinning of the vaginal walls, accompanied by dryness and inflammation. This means that sex could eventually become an excruciating experience. How does that happen exactly? Well, the female hormone plays an important role in ensuring that enough oxygen and nutrients get sent throughout the entire vaginal area. When there’s not enough estrogen to do that, the region begins to wither away. But there’s hope, as phytoestrogens (and Pueraria Mirifica itself) were found to have potential in providing relief without causing side effects.

On Your Trip, Don’t Miss Out

Truth be told, those are just a few good examples of the health benefits that can be enjoyed from these remarkable plant-sourced compounds. And surely, many other advantages are yet to be discovered. In fact, they’ve also been found capable of helping in the fight against breast cancer. Moreover, they have shown promise in keeping away anxiety as well, and we’re not just talking about mood swings. So, if you do end up visiting Thailand, the Land of Smiles, don’t miss the chance to try one of the most potent phytoestrogen sources in the entire world: Pueraria mirifica. Find out firsthand how Thai women seems to have won the battle against aging. But of course if you can’t wait any longer, you could always just order Pueraria serums for that added convenience while still reaping all the perks the herb has to offer.

Photo by Robin Noguier on Unsplash