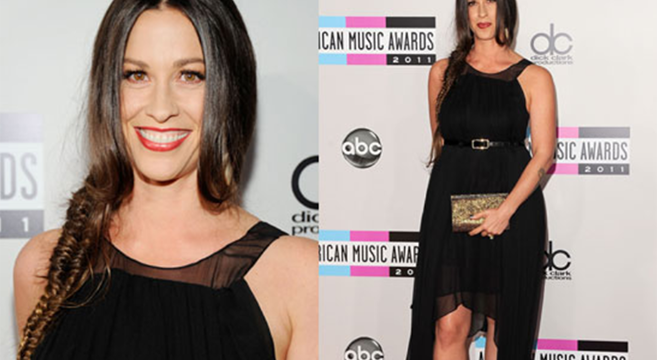 Beloved Canadian songstress Alanis Morissette may have slipped out of the music scene for a while but her widely successful tunes continue to dominate even today. While you may know the basics about Alanis, such as the fact that she was born in 1974 and has a twin brother called Wade, there’s a lot more to that you oughta know about the teen angst superstar of the 90s.

1. Alanis recorded her very first song when she was just 10 years old, called ‘Fate Stay with Me’.

2. Her first album, released in Canada back in 1991, was actually a pop album, since her alternative rock phase came much later. Considered the Debbie Gibson of Canada at the time, she opened shows for Vanilla Ice and featured beloved Friends actor Matt LeBlanc in the video for her single ‘Walk Away’.

3. Alanis is also something of a fitness buff, having worked as an aerobics teacher as well as forming part of a swim team. She has revealed that she has a strong passion for sports and dancing.

4. She has one wicked sense of humour, featuring in a viral spoof of Fergie’s popular hit: My Humps.

5. You Oughta Know features contributions from Red Hot Chilli Peppers’ bassist and guitarist Flea and Dave Navarro, brought in by Maverick Records’ Guy Oseary to add something extra to the now iconic track.

6. In 2010, Alanis married rapper Mario ‘Souleye’ Treadway and the two are still happily together to this day. Alanis has admitted the marriage was one of the smartest decisions of her life: “With Souleye, when I first met him, I could see that there was this limitlessness to where we could go.”

7. Among her high-profile relationships, the most infamous had to be her 3-year engagement to Ryan Reynolds. The two met at a birthday party for Drew Barrymore.

8. Alanis was introduced to the entire Maverick Recording Company team (who produced Jagged Little Pill) in her sweatpants. According to EW, “they said, ‘You need to go over and meet everybody at Madonna’s label.’ And I said, ‘I’m in my f—ing sweatpants!’ And they said, ‘Well, you gotta go now!’ So my first meeting with the whole team was me in my sweatpants. It was horrifying. Thankfully, they loved my music.”

9. Earlier this month, singer Michael Buble hinted that he formed part of a secret poker ring together with Alanis and other well-known Canadian celebrities, including Celine Dion and Drake.

10. The successful track ‘Hand in my Pocket’ was written in just one hour, according to co-writer Glen Ballard. “I saw her write that in front of me, like, in an hour.”

11. “Ironic” almost didn’t make it onto the album — it was actually Glen Ballard who pushed Alanis into it as she wasn’t convinced of its long-term worth.

12. A Broadway show that will be based on Jagged Little Pill is currently in the works according to an interview with Alanis in Billboard. Tom Kitt will be composing, the same guy behind the theatrical production of Green Day’s American Idiot.

13. ‘Hand in my Pocket’ was supposed to be the theme song for “Dawson’s Creek”, rather than Paula Cole’s “I Don’t Want to Wait” but the producers failed to secure the rights to the song and by the time the series was set to premier, Alanis’s hit was out of Warner Brother’s price range. However, the series finale does actually feature the song in it’s opening credit sequence, which is played out like an old home movie.

14. ‘Jagged Little Pill’ features a secret track called “Your House (A Capella)” at the very end that will only play if the album is played on a loop.

15. She recently rewrote the lyrics of her hit single ‘Ironic’ to better reflect the ‘ironies’ of modern society… and they’re awesome!

Previous post:
Is HEREDITARY Too Terrifying? Audience Heart Rates Off The Charts For Horror Of The Decade Next Post:
This Generation’s “The Shining”: Tarantino Was Brought To Tears When He Watched “SUSPIRIA”