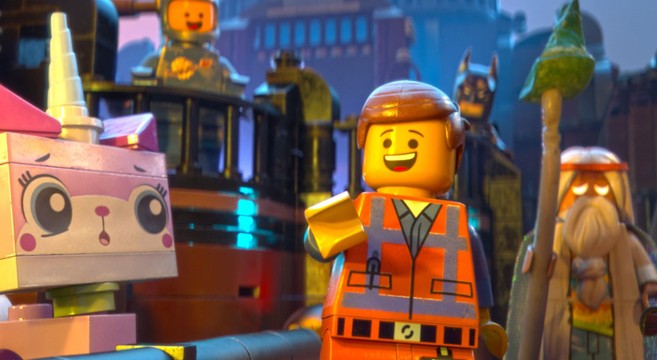 The ★★★★★ reviews of the brand new “The LEGO Movie” are rolling in so fast, it’s impossible to count them all.  In his review for The Atlantic entitled “The LEGO Movie Is A Blast“, Christopher Orr writes: “Goofy? Extremely. But ‘The LEGO Movie’ is a ball from start to finish, stuffed full of gags with trans-generational appeal.”

And Drew Taylor of The Playlist came out of the theatre completely blown away: “And the movie is absolutely sensational to just watch. The animation was largely handled by Animal Logic, an Australian company that had been responsible for some of the Lego-branded ‘Star Wars’ specials and who bring this universe to life using an uncanny combination of stop motion animation and computer generated imagery. (The fact that the movie has been in production since 2011 should not surprise anymore.) There’s a clunky, imperfect quality to the animation (supervised by longtime ‘Robot Chicken’ collaborator Chris McKay) that is utterly charming, and the animation is even more brilliant when viewed in 3D. Few movies, especially animated films which usually come from the same mold, can truly be described as unlike anything you’ve ever seen before. Still, ‘The LEGO Movie’ is one of those movies.”

Richard Corliss of TIME magazine was equally floored by the awesomeness: “You might not realize it yet, but we’ve just set your weekend plans: Take the kids to ‘The LEGO Movie’ — the funniest, cleverest, most exhaustingly exhilarating animated feature in ages — then leave them to play with their toys and see it again for your own wicked amusement. A few days each year, every family deserves to be happy.”  The film has also scored a whopping 97% rating on Rotten Tomatoes.  Warner Brothers knew a week ago that the film was about to go supernova, so they quickly launched the development of the film’s sequel.

Previous post:
Sarah Jessica Parker Discusses Her Stunning New Shoe Line, SJP, And The “Sex And The City” Rumours Next Post:
New Study Confirms What You’ve Suspected All Along: Your Cat Really Doesn’t Give Two Shits About You