I just came across this stunning stunning renovation of an abandoned men’s club which is now a home while reading Yatzer.  Yatzer originally heard about this renovation on The New York Times some days ago from a remarkable article written by Rebecca Flint Marx, and all images are courtesy of Robert Rausch of GAS Design Center who exclusively took the images of The Harmony Club for The New York Times.

The Harmony Club was originally built in 1909 and was operated as a social club by the Jewish community of Selma, Alabama.  It is situated on a high bank that overlooks the Alabama River. The project was then headed by B.J. Schuster, a prominent merchant and later the President of the Harmony Men’s Club.  The 20,000 square foot layout of the Harmony Club was given use according to the floor; the first floor operated as two retail spaces, the second floor was a restaurant up front and a Men’s Lounge in the back.  The Men’s Lounge was off limits to the public back then; it had a pool table, poker games, slot machines, cigar chomping and of course the wives were never allowed, nonetheless “ladies” were occasionally permitted to enter.  The third floor operated as a ballroom that over the decades experienced many dances and parties.  The club functioned for several years non-stop till in the late 1930’s it turned into the Elks Club, where it eventually disbanded in the 1960’s and the building boarded up.  For nearly forty years the building sat quiescent till one day David Hurlbut bought it in 1999.

Hurlbut, who is now 47, first saw the property a decade ago as he found it through www.historicproperties.com, and he immediately knew that it was what he had been searching for.  He envisioned the completed building and saw beyond the then current state of the building.  “The building’s sole inhabitants were a flock of pigeons that left behind what he estimates to be about 140 cubic yards of guano.  There was no plumbing, and the electrical wiring was in shambles,” he said.  Still, he knew he’d found his home. “I thought it would be a perfect clubhouse for me,” he said. “It’s probably a guy thing.”  After a small number of visits he purchased the property for a little less than $100,000 and moved in the turn of the new millennium – January 1, 2000.   David Hurlbut who works as an industrial designer and an architectural consultant saw things differently due to the nature of his work and his experience.  It took him nearly two years to make Harmony Club a “remotely habitable by most people’s standards”.  So far, ten years down the road he spent nearly $150,000 and has taken great care to preserve the architectural details.

Hurlbut has spent a lot personal time in preserving the architectural details, as well as leaving the walls unfinished as if the time stopped in 1960’s.  To preserve the paint on the walls and leave this semi-flaked effect he has sealed the walls with clear glossy polyurethane paint.  Today, Hurlbut operates the first floor as an Arts Revive Show space along with a commercial space where hopefully an Italian restaurant will open there sometime in the next year. The first floor color palette is in hues of bordeaux, black, and brick walls, while the dark hardwood floor and ceiling revive an era of the past; the restaurant space connects to a courtyard.  The first floor connects to the second through a large dark stained wooden staircase which preserves the glamour of the former Harmony Club.  Neo-classical Corinthian style pillars in dark stained wood with golden detailing add a stylish and sophisticated appearance and a contrast with the preserved polyurethane gloss walls.  The wooden surfaces have been treated in such a way that it seems as if a day has not gone by.  All in all, the Harmony Club was and is a key feature of Selma’s historic Water Avenue district.  David Hurlbut should be very proud of being able with lots of hard work to preserve the architectural detailing and bring out the old through a new interior design approach. 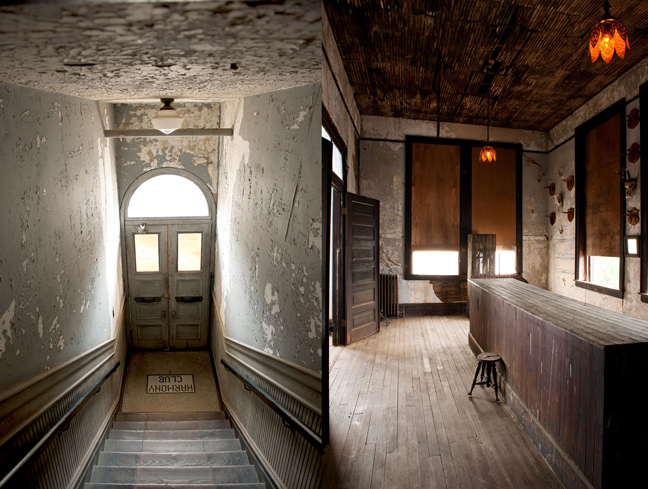 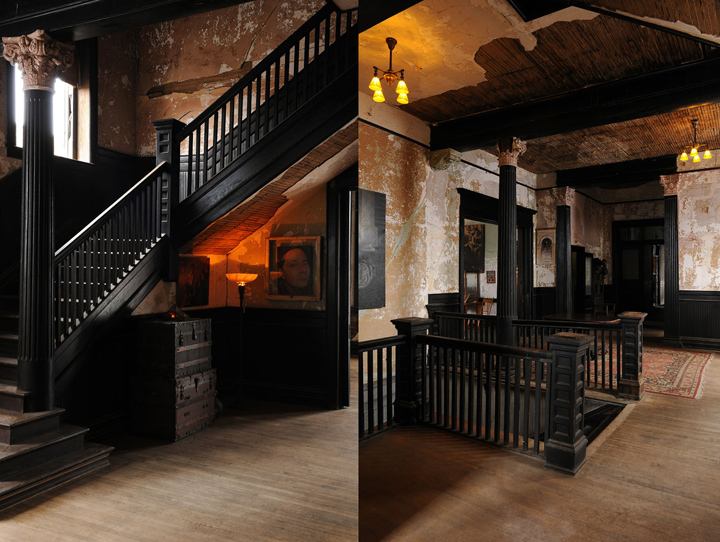 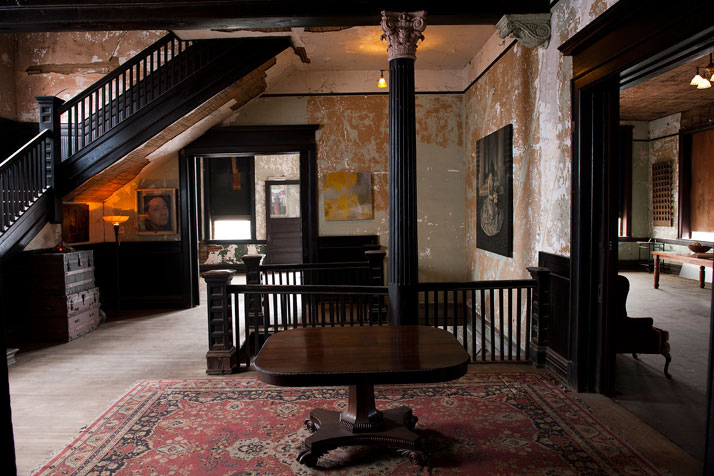 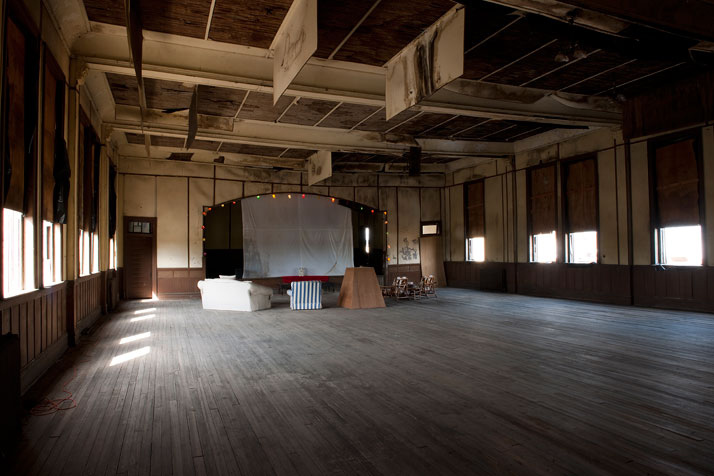 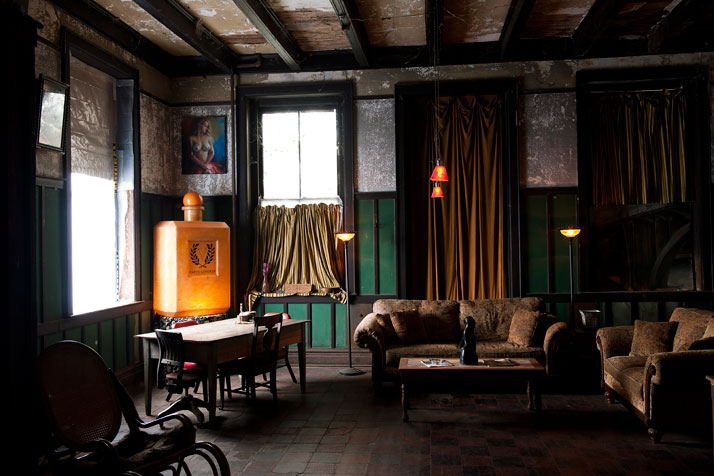 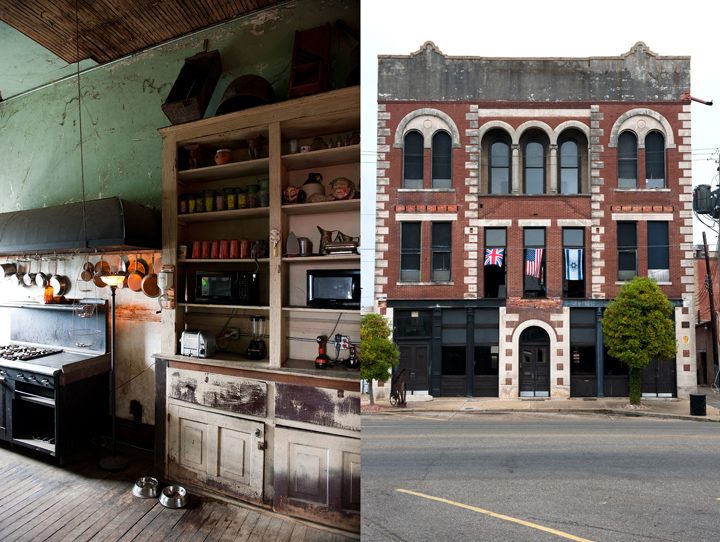