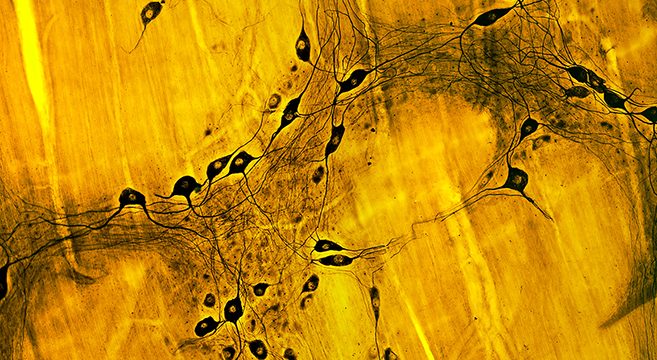 Parkinson’s Starts & Stops In The Gut, And How Cancer Cells & Their Environment “Talk” To Each Other

The vital bacterial colony in your gut (i.e. your microbiome) is otherwise known by scientists as your “second brain.” We are just beginning to discover the enormously complex symbiotic relationship between the gut and the brain, and with each passing year it’s becoming harder and harder to distinguish between the two. Further proof of this has come in the form of Parkinson’s research which is bringing into focus how the disease does not begin in the brain — it begins in the stomach and colon.

Parkinson’s emerges from the death of neurons deep in the brain, and the death of these neurons leads to stiffness, shakiness, tremors, and difficulty moving. Although there are drugs available which can help alleviate the symptoms, they become almost useless as the disease gets worse and worse. The neurological red flag of Parkinson’s involves synuclein molecules — typically harmless insoluble fibers in healthy nerve cells, which for some reason in people with Parkinson’s, begin to twist, contort, and clump together to form problematic fibers.

The findings line up with symptoms of people with Parkinson’s who complain of constipation, approximately 10 years before Parkinson’s emerges. It also lines up with another mysterious symptom of Parkinson’s patients — loss of smell. The fact that the nerves in the nose and the nerves in the gut are the most directly connected to the outside world (and most exposed to dangerous toxins and microbes) is likely no coincidence.

Now researchers at the California Institute of Technology have observed the gut-to-brain spread of synuclein fibers in mice. Three weeks after the mice had these fibers injected into their stomachs, the fibers were then found in the area of the brain that governs movement, and the mice began to show the hallmark symptoms of Parkinson’s.

A growing body of research has also shown that Parkinson’s patients have a very different colony of gut bacteria compared to healthy individuals. This unhealthy microbiome triggers inflammation which creates the ideal environment for synuclein fibers to flourish. Other studies have found significantly higher rates of Parkinson’s in farmers who are exposed to pesticides (in the air and in well water) which cause nerve damage.

Researchers are already close to developing drugs which shut down the formation and spread of dangerous synuclein fibers in the gut, which could help stop the disease before it even begins. Others are experimenting with antibiotics and faecal transplants to help their patients avoid the disease. And colonoscopy screenings typically used to detect cancer, could also be used to detect early-stage formation of synuclein fibers.

In related news, a team of Cornell engineers and researchers from the University of Pennsylvania have observed how cancer cells engage in “conversation” with their surrounding environment. The research was led by Mingming Wu, associate professor in the Department of Biological and Environmental Engineering. “‘The [cellular] matrix is like a rope, and in order for the cell to move, they have to exert force on this rope,’ she said. ‘The question arose from cancer metastasis, because if the cells don’t move around, it’s a benign tumor and generally not life-threatening.’ It’s when the cancerous cell migrates that serious problems can arise. That migration occurs through ‘cross-talk’ between the cell and the matrix, the group found. As the cell pulls on the matrix, the fibrous matrix stiffens; in turn, the stiffening of the matrix causes the cell to pull harder, which stiffens the matrix even more. This increased stiffening also increases cell force transmission distance, which can potentially promote metastasis of cancer cells. ‘We’ve shown that the cells are able to align the fibers in their vicinity by exerting force,’ Hall said. ‘We’ve also shown that when the matrix is more fibrous – less like a continuous material and more like a mesh of fibers — they’re able to align the fibers through the production of force. And once the fiber is aligned and taut, it’s easier for cells to pull on them and migrate.'”

The discovery of this form of communication between cancer cells and their surrounding environment could hold the keys to major breakthroughs in immunology, cancer biology, and could help in the design development of more advanced biomaterial scaffolds for tissue engineering.

SEE ALSO: For The First Time Ever Scientists Observe Newly Discovered Gut Bacteria Eating Up Brain Chemicals
SEE ALSO: The WOW Files: Incredible Video Shows You The 4 Foods That Are Destroying The Balance In Your Gut
SEE ALSO: Anxiety, Depression & Autism 100% Linked To Gut-Brain Axis And An Abnormal Microbiome In Intestines
.