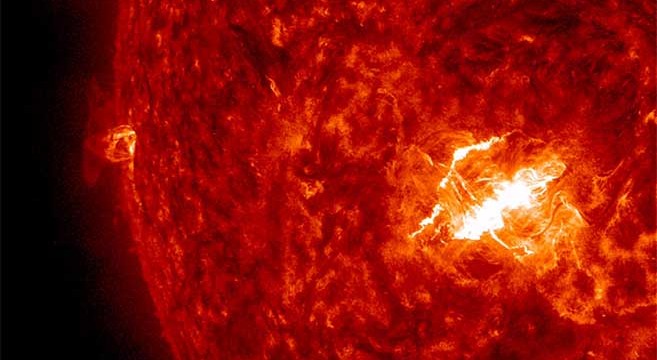 Last week on Wednesday, March 11, 2015 the Sun blasted us with a direct hit from a powerful solar flare that wiped out a huge amount of radio communication, according to NOAA’s Space Weather Prediction Center. Mike Wall of Space.com writes: “The Wednesday flare registered as an X2.2 sun storm on the scale used to measure solar tempests. Scientists classify strong solar flares into three categories: C, M and X, with C being the weakest, M being mid-level and X the strongest. X flares are 10 times more powerful than M flares. X2 and X3 flares are twice and three times as potent, respectively, as X1 flares.”

And just a few hours ago NOAA reported that Earth is currently being slammed by the grandaddy of all solar storms — a monster X4-class storm — the biggest of all. “An X4 (Severe) geomagnetic storm was observed today at 9:58 am EDT. This is the response to a pair of CMEs observed leaving the Sun [two days prior] on 15 March.”

Today’s monster geomagnetic storm, and the explosion of solar flares and coronal mass ejections over the past week, have been wreaking havoc on people’s moods, sleeping patterns, and a host of other human health effects. Many people are experiencing disturbances with their circadian rhythms, waking up around 2am and having trouble getting back to sleep. “Solar storms desynchronize our circadian rhythm (biological clock). The pineal gland in our brain is affected by the electromagnetic activity, and [solar storms cause] the gland to produce excess melatonin, the brain’s built in ‘downer’ that helps us sleep. ‘The circadian regulatory system depends on repeated environmental cues to [synchronize] internal clocks,’ says psychiatrist Kelly Posner, Columbia University. ‘Magnetic fields may be one of these environmental cues.’ ”

The type of intense solar activity we’ve been experiencing this week can have serious effects on: the central nervous system, the stomach lining, all brain activity (including equilibrium), along with human behavior and all psycho-physiological (mental-emotional-physical) responses. This can manifest as nervousness, anxiety, worrisomeness, the jitters, dizziness, shakiness, irritability, lethargy, exhaustion, short term memory problems, heart palpitations, nausea, queasiness, prolonged head pressure, and headaches.

Chaotic and erratic behavior also results from intense solar activity, and emergency rooms consistently observe increased accidents, as well as injuries from acts of violence during these periods. Experts have even linked powerful solar activity to much more serious patterns in human violence. “During solar minimums and maximums the geomagnetic fields begin to intensify. The magnetic fields interact electrochemically within the human brain. It affects psychological mechanisms creating anomalous hormonal swings and significantly mutated brainwave activity. Wheeler expanded on Chishevsky’s work by studying violence; measuring the time between battles and severity. These findings were compared with the Sun’s 11-year sunspot cycle. The results showed that as the Sun cycle peaked, there was a rise in human unrest, uprisings, rebellions, revolutions, and wars between nations. As Wheeler further compared his findings with human history, he found a startling pattern that could be traced back 2,500 years.”

There’s no telling whether Edward Norton was suffering the ravage of a geomagnetic storm when he was filming this scene from the 2003 film 25th Hour, but millions of folks woke up this morning in exactly the same mood as him thanks to the Sun’s extreme activity these days. You can learn more about the storm and the flares, including video of the event, by visiting NASA’s Solar Dynamics Observatory.