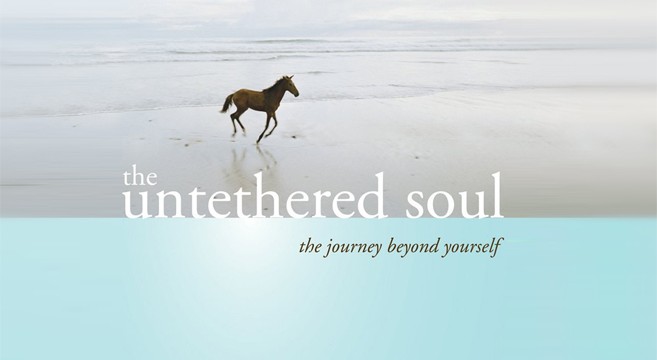 FEELguide Classic: Reading “The Untethered Soul” Has Felt Like My Own Personal Spiritual Revolution

Last month I had a few conversations with someone whose spiritual journey was endlessly fascinating to me.  He is someone who has spent years dedicating himself to the hard work and discipline of his own personal spiritual development — more so than almost anyone I’ve met in recent years.  Over the course of several days and many long talks he continuously referenced a book called The Untethered Soul, and had nothing but enormous praise for how much of a powerful impact the book was having on his life.  It was all the convincing I needed, and earlier this morning I just finished reading it for myself.  Not only was everything he said about the book as important as he described, The Untethered Soul has given me more than I ever thought imaginable.

Written by Michael A. Singer, and first published back in 2007, The Untethered Soul took me on an astonishing journey into the nature of human consciousness.  It has given me an unprecedented glimpse of the architecture of my mind and soul, and provided me with a remarkable new set of tools that have given me the power to free myself from habitual thoughts, emotions, and energy patterns that have limited my consciousness.  It’s one thing to read a book as powerful as this and have it clearly explain the nature of “self”, but the brilliant way in which Singer gives the reader the techniques needed to bypass the “self” and gain access the ocean of consciousness that exists inside each and every one of us is what makes this book so truly exquisite.

Psychology professor Steven C. Hayes, Ph.D. writes for Psychology Today: “Perhaps it is like a lot of books in that genre, but as I read it I’m struck by the degree to which its wisdom is supported by modern clinical science.  It beautifully expresses some of the ideas that empirically based treatments have carved out and tested over the last few decades.  In ‘The Untethered Soul’, the very first chapter is a lesson in cognitive defusion, one of those six core processes.  Singer writes: ‘In case you haven’t noticed, you have a mental dialogue going on inside your head that never stops.  It just keeps going and going.  Have you ever wondered why it talks in there?  How does it decide what to say and when to say it?  How much of what it says turns out to be true?  How much of what it says is even important?  And if right now you are hearing, ‘I don’t know what you’re talking about. I don’t have any voice inside my head!’  That’s the voice we’re talking about.  If you’re smart, you’ll take the time to step back, examine this voice, and get to know it better.  The problem is, you’re too close to be objective.  If you spend some time observing this mental voice, the first thing you will notice is that it never shuts up.  When left to its own, it just talks.’ ”

Yogi Amrit Desai is the internationally recognized pioneer of modern yoga, and he raves how Singer’s The Untethered Soul is “a seminal book that quite frankly is in a class by itself.  In a simple, yet paradoxically profound way, Michael A. Singer takes the reader on a journey that begins with consciousness tethered to the ego and ends having taken us beyond our myopic, contained self-image to a state of inner freedom and liberation.  Michael A. Singer’s book is a priceless gift to all who have futilely searched and yearned for a richer, more meaningful, creative life.”

Oprah Winfrey is another major fan who says she has given the book to everyone closest to her in her life. She published an excerpt from chapter 15 of the book which you can read in full at Oprah.com. She sat down with Michael A. Singer in August 2012 for a fascinating conversation, and I’ve attached all of the clips for you to watch below.

I cannot recommend this book enough, and I encourage you to read it as soon as you possibly can.  You can grab your own copy on Amazon.  For more amazingness from Michael A. Singer be sure to visit TheUntetheredSoul.com.  The Untethered Soul is published by the extraordinary team at the Institute of Noetic Sciences (IONS) which was founded in 1973 by Apollo 14 astronaut Edgar Mitchell.  You can learn much more about their work by visiting them at Noetic.org.