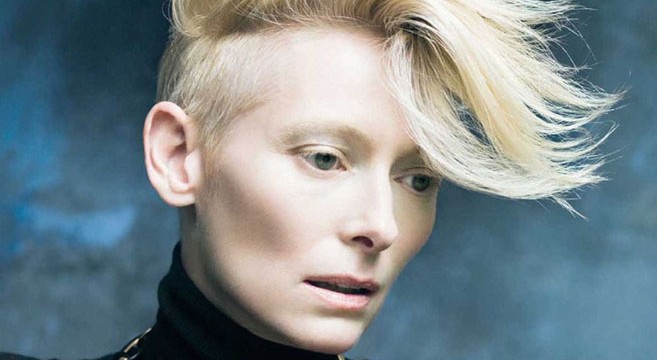 Installation artist Doug Aitken is currently showing his latest project entitled The Source (Evolving) at the 30th anniversary of the Sundance Film Festival in Park City, Utah.  The Source (evolving) made its international premiere at the Tate Liverpool last year, and its Sundance showing this week marks its U.S. debut.  The project consists of a sprawling network of 4-minute interviews with creative visionaries on the subject of the creative impulse, presented online as well as inside the project’s custom-designed 6,000 square-foot standalone circular space at Sundance designed by architect David Adjaye, who also happens to be one of the many people interviewed for the project as well.

The Sundance presentation of The Source (evolving) is part of the festival’s New Frontier program which presents films which challenge the form of cinema and push the boundaries of storytelling and traditional narrative structures.  “Doug Aitken, as an artist and as an explorer of humanity, is a kind of soulmate of New Frontier,” says New Frontier’s curator, Shari Frilot.  “Today, we live in an age of expanded cinema where everyday we move through and fully immersive media environment.  ‘The Source (evolving)’ beautifully embodies the spirit of this expanded cinema by bringing monumental form and interactivity with the moving image to the streets and the very air of Park City.   It is incredible to have Doug back to New Frontier on the occasion of the 30th anniversary of Sundance with his astonishing work.”

“I’d really like to make this a living project — a living artwork that doesn’t really have an end,” says Aitken.  “I love this idea that something can kind of grow, and this dialogue can expand, and it can be democratized and given away.  And anyone can take a piece of it, and agree with it or disagree with it.”   The Source (evolving) features interviews with 22 creative minds including: William Eggleston, Ryan Trecartin, Richard Phillips, Paolo Soleri, James Murphy, Jack White, Mike Kelley, Devendra Banhart, Beck, Tilda Swinton, Alice Waters, and James Turrell.  Although the physical experience of The Source (evolving) wraps up in Sundance on Saturday, January 25th, the project’s online presence will continue to grow and evolve for years and years to come.

You can read Doug Aitken’s interview with Interview magazine by visiting InterviewMagazine.com.  If you’re lucky enough to be at this year’s Sundance you can find the address, dates, and times of The Source (evoloving) by visiting Sundance.org.  To enter the mother ship be sure to visit the amazingness that is DougAitkenTheSource.com.  And readers of FEELguide will also recognize Aitken’s other fascinating project entitled Station To Station, a multimedia art train which travelled across America, which I profiled in September 2013.  You can read more on that HERE.

SEE ALSO: Happy 53rd Birthday To Tilda Swinton, The One And Only Queen Of FEELguide
SEE ALSO: Doug Aitken’s “Station To Station” Multimedia Art Train Sets Out Across America
SEE ALSO: The Joy Of Sensing: Light Artist James Turrell Talks To Charlie About Power Of Light And Perception