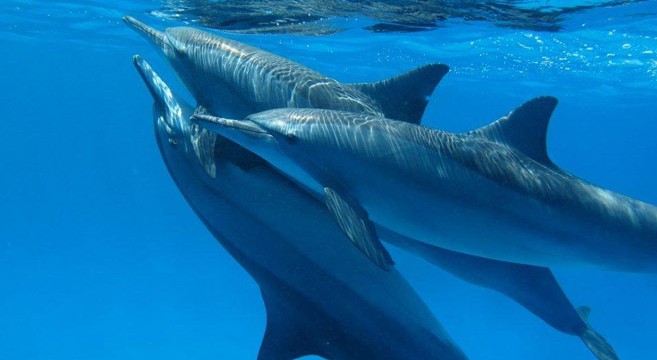 The Earth is overflowing with an abundance of biological highs, and humans are by no means alone in their enjoyment of them.  From the vervet monkeys of St. Kitts that love alcohol, to the reindeers of the arctic that love nothing more than a good trip on hallucinogenic mushrooms, the enjoyment of these psychotropic compounds found in the natural world is something shared by a wide range of creatures.

Experts continue to discover more and more species which love to trip the light fantastic — the latest discovery coming from the extraordinary world of dolphins.  While filming the BBC documentary series Dolphins: Spy In The Pod, filmmakers captured a group of young dolphins getting high on puffer fish.  “Young dolphins were seen carefully manipulating a certain kind of puffer fish which, if provoked, releases a nerve toxin,” writes The Sunday Times.  “Though large doses of the toxin can be deadly, in small amounts it is known to produce a narcotic effect, and the dolphins appeared to have worked out how to make the fish release just the right amount.  Carefully chewing on the puffer and passing it between one another, the marine mammals then enter what seems to be a trance-like state.”  Rob Pilley is a zoologist and a co-producer on the series: “This was a case of young dolphins purposely experimenting with something we know to be intoxicating,” says Pilley.  “After chewing the puffer gently and passing it round, they began acting most peculiarly, hanging around with their noses at the surface as if fascinated by their own reflection.”

Dolphins: Spy In The Pod airs on BBC One on January 2, 2014.  You can learn more by visiting BBC.co.uk.  There are almost 40 species of dolphin in 17 genera. They vary in size from 4-ft-long weighing 90 lbs such as Maui’s dolphin, up to 30-ft-long weighing 10 tonnes such as the orca whale (i.e. killer whale) which is the largest member of the dolphin family.  They are found worldwide, mostly in the shallower seas of the continental shelves and are carnivores, eating mostly fish and squid.

Dolphins are the second-most intelligent creature in the world, with only humans displaying greater brainpower.  To learn more about the evolution and science behind the dolphin’s extreme emotional and cognitive intelligence be sure to visit Discovery.  Ironically, philosopher Terrence McKenna — one of the most enlightened champions of hallucinogenics in modern history — spent a great deal of time swimming with dolphins and their “incredible vibrations” in the final weeks and months of his life.

Previous post:
Forbes Explains The Terrifying Reason Why You Should NEVER Give A Store Your Zip Code Next Post:
The Fascinating Reasons Why You Should Convert Your Music To 432 Hz, The Frequency Of The Universe