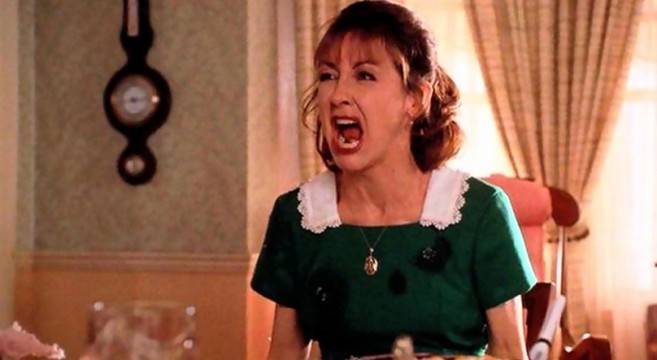 Christmas is a wonderful time to remind ourselves that nothing is more important than family.  It’s also a great time of the year to remind ourselves that our families can drive us absolutely bonkers.  Even world renowned spiritual guru and author Ram Dass once famously wrote:  “If you think you are so enlightened, go and spend a week with your parents.”  But what is it exactly that gives our families the secret power to push our buttons unlike anyone else in the Universe?  The following are the Top 4 reasons why:

1. THE NARCISSISM OF SMALL DIFFERENCES: Sigmund Freud observed that when people live extremely close to each other, while sharing very similar traits, the combination produces the most bitter fights.  Freud observed the pattern most acutely in “Spaniards vs. Portuguese, the North Germans vs. South Germans, the English vs. Scotch.”  Freud called this pheonemon the “narcissism of small differences.”  Freud elaborates: “It is precisely the minor differences in people who are otherwise alike that form the basis of feelings of hostility between them.”  Chris Logan is a Senior Lecturer of Psychology at Dallas’ Southern Methodist University, and he explains that if we and our family members have, “a lot of overlap in characteristics and a high desire for uniqueness, we will focus on those points that make us different.  When we are all sitting around the same table, eating the same food, celebrating the same event, wearing the same terrible sweater, trying to justify our life choices to our parents, we might naturally focus our attention on those things that differentiate us from the others.”  Felder has written that, “when our relatives are different in a bad way, we might even see it as a reflection on ourselves.  And the fact that you’re blood related to an incorrigible homophobe might be too much to bear.”

2. SOCIAL ALLERGENS: When you find yourself walking through the door of your family home at Christmas, get ready to observe two highly combustible elements at play.  The first are the small, repetitive habits of family members; and the second is the fact that you are locked down in this home for several days where these repetitive habits quickly grow amplified to the point of unbearability.  Whether its grandpa’s dog that gets VIP treatment over the grandchildren, or your uncle’s nauseating and seemingly endless hunting stories which haven’t changed in thirty years, or that certain someone in your family who always ties a sarcastic contrarion bow on the end of everything that comes out of their mouth — these habits can form an atomic bubble inside yourself that can pop at any moment towards the end of the holiday.  In his book Annoying: the Science of What Bugs Us, Joe Palca describes these patterns as “social allergens”: “Small things that don’t elicit much of a reaction at first but can lead to emotional explosions with repeated exposure.  Cumulative annoyances are one of the major triggers of relationships conflicts,” Logan said.  “Conflicts are often triggered by repetition of certain small behaviors.”

3. PASSIVE AGGRESSION: Perhaps the biggest and most powerful precipitant of blowups inside a packed home during family Christmas is passive aggressive behavior.  First coined near the tail end of WW2, one of the most famous examples of passive aggression that laid the groundwork for its now widely understood psychological impacts came when a colonel in the U.S. army observed several troops as having, “a neurotic type reaction … manifested by helplessness, or inadequate responses, passiveness, obstructionism, or aggressive outbursts.”  Welcome to Christmas dinner, ladies and gents.  Most families develop enormous layers of deeply-rooted passive aggression that have taken decades to build.  Passive aggression emerges as an adaptive behavior when a person tries not to break arbitrary social rules, but there are consequences to this behavior — both for the family members who use it, as well as for the family members who encounter it in others.  “Some of the people being demeaned as passive-aggressive are in fact being extremely careful not to commit mistakes, a strategy that has been successful for them,” Dr. E. Tory Higgins, director of the Motivation Science Center at Columbia University, told the New York Times.  This avoidance of confrontation, however, almost always erupts into sniping and yelling when the person maxes out their ability to please everyone at Christmas time.  Passive-aggressive people become difficult, Higgins said, “when their cautious instincts are overwhelmed by demands that they perceive as unreasonable.”  If you feel a passive aggressive family member about to explode in front of you, there is a 2-step process to prevent it from escalating: a) don’t attack the person verbally or you will be perceived as a threat which will set the person off; and 2) try hard to quickly uncover the potential source of the person’s anger and make an effort to incorporate your empathy for that cause in a compassionate and subtle way before they stonewall you.

4. SIBLING RIVALRIES: Sibling rivalries do not stop as we get older — they can continue for many years and even decades.  Experts have noticed that the most intense sibling rivalries appear between siblings of the same sex who are very close in age.  The rivalries tend to grow even more intense when the siblings have polar-opposite personalities (i.e. an extreme narcissist vs. a total pushover — both of whom happen to find the other’s temperament totally intolerable).  Sibling rivalries are incredibly complex to diffuse, due largely to the fact that the roots of the rivalry extend well beyond into the past — out of reach of the conscious mind, festering inside the unconscious, and connected to seeds that are often long forgotten in the first place.

The exact same patterns of problematic family dynamics are found throughout the Western world during Christmas time especially, and it’s worth noting that our relationship with irritation is shaped by culture — including our expectations of others, internal biases, and even the language we speak.  Furthermore, in his book Annoying: the Science of What Bugs Us, Joe Palca describes several cultures where the concept of annoyance, for whatever reason, does not exist.  I would suspect these cultures where family feuds are non-existent have an understanding of how dangerous the human ego can be.  To learn more about how to keep your ego in check during the holidays CLICK HERE.

One family that most certainly will NOT be fighting this year is the family of Shaun from B.C.  Over dinner last week my friend showed me a video of her good friend Shaun from Vancouver whose tearful reunion with his grandmother after 30 years apart was captured on film by the cell phone company Telus as part of the company’s lovely The Greatest Connection campaign.  Within three minutes I was brought to tears — as was my friend as well.  The video serves as a stunning reminder of how ego can break a family in half for three decades, as well as a powerful wake-up call that it’s never too late to be the family you’ve always wanted to be.

Previous post:
Dr. Oz. Performs LIVE Brain Scan On Medium Theresa Caputo & Turns From A Skeptic Into 100% Believer Next Post:
The Psychedelic Origins Of The Santa Claus Myth, And How Christmas Was Illegal In U.S. For A Century