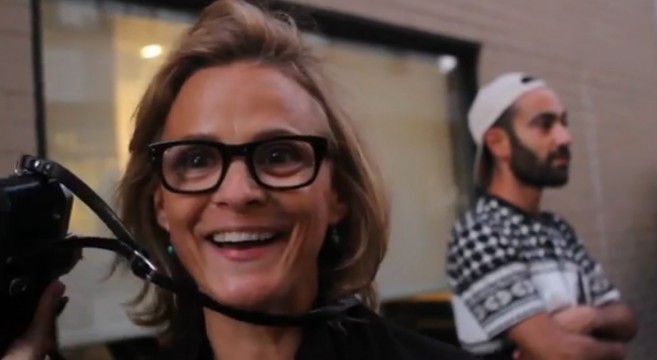 Fashion designer Adam Selman recently celebrated his debut fashion show New York Fashion Week, and as part of the event he asked his close friend (and FEELguide favorite) Amy Sedaris to appear in a mockumentary filmed behind the scenes.  In the NOWNESS clip below we see Sedaris make a brief cameo where she plays an in-your-face photographer as she wields a camera that doesn’t even have any film in it, much to the oblivion of the models she’s shooting.  “I just wanted her out there taking pictures and doing her thing,” Selman tells NOWNESS.  “But it was so great because her camera wasn’t even turned on.”  Selman’s debut comes after years of designing for superstars such as Rihanna, Britney Spears, Michael Jackson, the Scissor Sisters, and more.  So how did Selman and Sedaris meet?  They crossed paths at a Dolly Parton video shoot in Dollywood and instantly hit it off during a lunch break at a nearby Chick-Fil-A.  You can get the full story of their friendship by visiting NOWNESS.com, and for all FEELguide stories about Amy Sedaris be sure to visit Amy Sedaris on FEELguide.