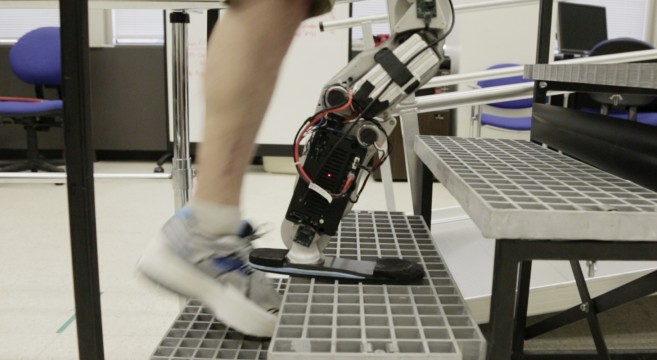 After Zac Vawter suffered a devastating motorcycle accident four years ago, doctors were forced to amputated his lower right leg.  For years, Zac had been using a standard prosthetic limb, but recently he was selected to test the revolutionary next-generation of robotic limbs controlled by brainwaves.  Zac tells CBS NEWS: “I seamlessly walk up a set of stairs and just go up foot-over-foot up the stairs, like you do, whereas with my normal prosthetic I have to drag it behind me as I go up the stairs.”

In a feature story published in the New England Journal of Medicine on Wednesday, researchers explain how the limbs work.  When a person thinks about walking, an electrical signal is sent from the brain down a nerve into the legs.  When a leg has to be amputated on a non-paralyzed patient, the nerves are still very much alive and working.  These new robotic limbs simply connect to those nerves and translate the brain signals into movement the exact same way the patient’s original leg used to.  “We’ve rewired him,” said Levi Hargrove, a research scientist who helped engineer the device with a team at the Rehabilitation Institute of Chicago.  “So you just think about moving along, the device pushes you along, pushes you up stairs, helps control you when you walk down stairs and it does everything in a seamless matter,” Hargrove said.

“It really blew my mind the first time we did that,” Vawter told CBS NEWS.  “It was a pretty amazing experience because I hadn’t moved my ankle in a way that I could see for two years or whatever it was.”  The research was funded by the U.S. Army, which hopes to transform the lives of more than 1,200 soldiers and 1 million Americans who have lower leg amputations.  You can learn more by watching the CBS NEWS report below.  I’ve also included another 60 Minutes report from June 2013 which covers a similar thought-controlled robotic limb breakthrough.

Previous post:
Legal Experts Warn Evangelical Sex Abuse Record Is Ten Times Worse Than Worldwide Catholic Scandal Next Post:
Shivum Sharma Made This Song In His Bedroom (Which Is A Great Place To Listen To It)