Banner Photo #106: New Book “Off The Grid” Is A Fascinating Look At The Rising Movement Of Off-Grid Living

One of the qualities I admire most about my family is their ability to stand any test the elements can throw at them.  Living in a small town in northern Ontario are my parents, my grandmother, my aunts and uncles, and a huge network of cousins and friends of the family.  Most of the men are lumberjacks or miners, who could each take apart a 4×4 truck and put it back together again better than it was before.  Not to be outdone, every single one of the women in my family could turn a fridge of a few leftovers and a garden of anything into the greatest meal you’ve ever had in your life.  Each of them are superior survivalists and know what it’s like to be tested by not only Mother Nature, but the economy as well.

But one of my family’s most impressive achievements is a small network of cottages they have built beside a lake in a remote northern Ontario forest that is almost entirely off the grid.  This is where we have our family reunions, where poker tournaments have lasted into the wee hours of the hot summer mornings, where bonfires inspire music and the greatest stories you’ve ever heard, where picnic tables have buckled under the weight of more feasts than anyone can remember, but most importantly this is where we go when we want to unplug.  Literally.

My family is certainly not alone in their creation of a “lifeboat community”.  The same networks of families and friends living off-the-land and off-the-grid have been around since the dawn of time, but in recent years observers have seen a rise in the numbers of off-the-grid living communities and people who are redefining one of the most beautiful words known to man — independence.  Mother Nature Network recently profiled this emerging trend in a story entitled “Going Off The Grid: Why More People Are Choosing To Live Life Unplugged.”  John Platt of MNN spoke with Nick Rosen, founder of the Off-Grid website and author of Off the Grid: Inside the Movement for More Space, Less Government, and True Independence in Modern America (purchase on Amazon).  In MNN’s feature interview, Rosen says: “It is real life and a real choice for real people.”  Rosen says people go off the grid for a variety of reasons, and they vary how deeply they go off-grid. “You can’t get off all of the grids all the time,” he says. “It’s a question of which grids you choose to get off of and in what way and for how long.”  Some people live off the grid part of the year for leisure purposes, taking a few months off from their jobs so they can live in a more relaxed manner.  Others get themselves off the public electrical or water systems but still participate in what Rosen calls the “car grid” or the “supermarket grid” or “bank grid.”

You can read the entire brilliant feature story by visiting MNN.com.  In relation, one of the most personally inspiring stories that I have covered in the past two years here on FEELguide is the PBS documentary Alone In The Wilderness which tells the story of Richard “Dick” Proenneke who, in the late 1960s, built his own cabin in the wilderness at the base of the Aleutian Peninsula, in what is now Lake Clark National Park in Alaska.  It’s been a couple years now since I first happened to catch the PBS special on Dick’s life one afternoon where I found myself instantly glued to the television from beginning to end.  If you have not seen this PBS special it is mandatory viewing for every single human being as far as I’m concerned, and adding to its amazingness is the fact that PBS created a follow-up sequel to this now legendary man’s life story.  You can watch previews of both parts below.

In 1999, at age 82 and after 30 years of summers spent at his cabin in Alaska, Proenneke returned to civilization and lived the remainder of his life with his brother in California.  He passed away on April 20, 2003 at the age of 86 and has since become a legendary figure to fans around the world.  He left his cabin to the National Park Service where it remains a hugely popular visitor attraction in the still-remote Twin Lakes region and holds an iconic place in Alaska’s modern history.  To learn more about the cabin and how to visit The National Park Service.

For more information on Nick Rosen be sure to visit Off-Grid.net and follow Off-Grid on Facebook and Twitter.  To purchase your own copy of Nick Rosen’s Off the Grid: Inside the Movement for More Space, Less Government, and True Independence in Modern America simply head over to Amazon.  The home design you see in my banner theme image is taken from my favorite sustainable residential home design of all time.  It is the “Villa 4.0” in the Netherlands designed by Dick van Gameren. It is almost entirely off-the-grid, has zero impact on Mother Nature, and is a stunning example of what the future of architecture can and should be.  You can read more about Villa 4.0 here: “Architect Dick van Gameren’s Incredible “Villa 4.0″ In The Netherlands Is Blowing My Sustainable Mind“. 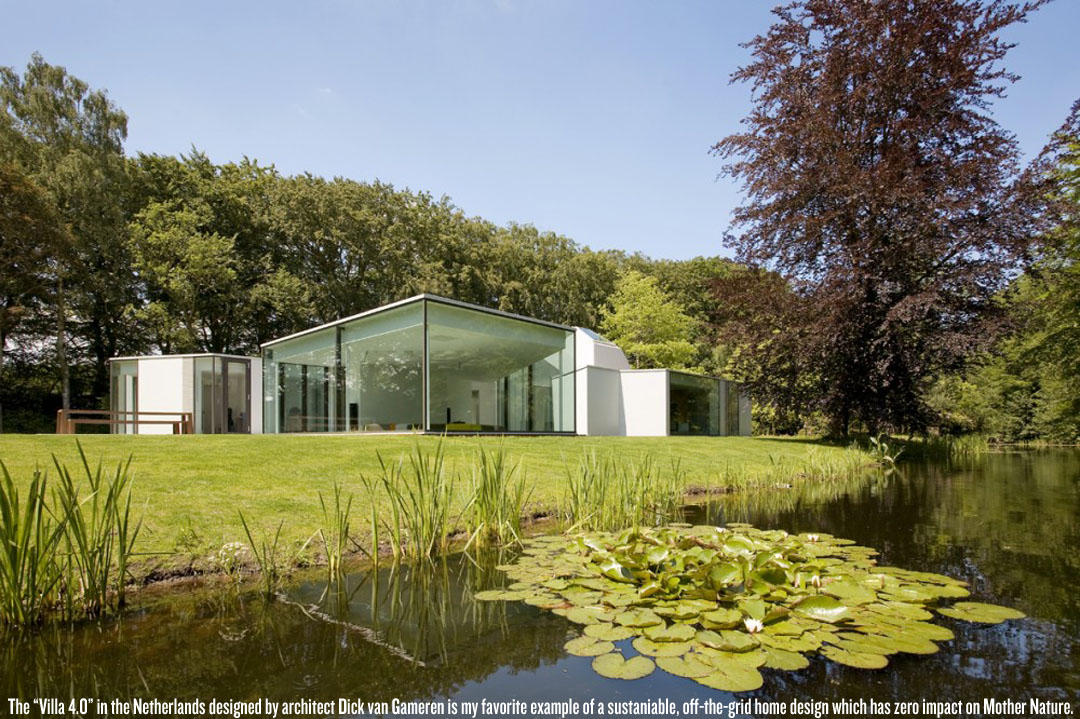