Slate magazine recently profiled what many pop culture gurus are raving is the world’s most brilliant celebrity Twitter parody account in existence: @NotTildaSwinton.  The mini-phenomenon was born the day after our century’s very first eclipse which took place last Sunday May 20, 2012.  The following tweet popped up the next day out of nowhere from the brand new account: “‏The eclipse has given me much power. My skin glows. Tonight I feast on large game.”  Mouaaaaaaahahahahahaha!!!  Five days, 200+ updates, and 30,000 followers later, the world’s brand new Twitter darling has taken its place at the top of the most delicious celebrity Twitter parody accounts in the universe.  Slate notes, “@NotTildaSwinton isn’t quite parody, though — or, at least, not just that.  There is a trippy piety to the tweets, a combination of uproarious nature-worship and makeshift self-help proferred freely to her followers (or ’tildren,’ as she calls them).”  The ingenious tweets continue to flow well into the wee hours of the night, and you can get a taste of some of the tweets in the image below.

Pop culture denizens such as Vulture and BuzzFeed have declared their love for the account, and with each and every tweet, the creators get an immediate tsunami of replies from their eager followers.  Slate caught up with the two young men behind @NotTildaSwinton: Eli Yudin, 21, and Carey O’Donnell, 23.  Yudin created the account himself, then enlisted his Twitter friend O’Donnell to participate.  Yudin admits his shock at how quickly the account went viral, telling the story of how it was born following a dental visit where he got his wisdom teeth removed and was relegated to his living room sofa where he spent the rest of his time watching Netflix and eating buffalo pringles.  Soon enough, some of Twitter’s biggest names started following the account, such as Susan Orlean of The New Yorker, and Anderson Cooper.

The narrative these two have built for their brilliant take on Swinton is augmented by the mysterious and captivating aura the real-life Swinton has carefully built around her life, her career, and her image.  A powerhouse intellectual and ‘non-actress’, Tilda has created a fascinating arthouse sandbox universe filled with collaborations between herself and fellow writers, thespians, and philosophers on her same frequency.  One look at her career choices and it’s clear Swinton is building an array of collected characters and performance art which is part of a much bigger, more fascinating picture (Orlando, The Deep End, I Am Love, We Need to Talk About Kevin, etc.)  Yudin and O’Donnell have taken Tilda’s mystique and constructed their own technicolor riff on Swinton’s magical world, complete with her own sidekick, “a bat she birthed named Theremiah. (@NotTildaSwinton: Playing a dessert game with Theremiah. I nap with my mouth open. He collects and deposits food. When I wake up, I taste the cornucopia.) It’s a scary, glorious world, one we will sorely miss should today’s revelation prove to be the end.”

Sadly, Yudin and O’Donnell have wrapped up their tongue-in-cheek @NotTildaSwinton project in order to avoid overstaying their welcome (although I’m hoping they seriously reconsider this decision).  But their adventures will continue on their new Tumblr site NotTildaSwinton.tumblr.com. You can read more of Slate’s interview with the boys behind @NotTildaSwinton by visiting Slate.com (and be sure to follow Slate on Facebook and Twitter).  You can also follow Eli Yudin on Twitter as well as Carey O’Donnell on Twitter.  And for the very best stories from the magical world of Tilda Swinton be sure to visit Tilda Swinton on FEELguide. 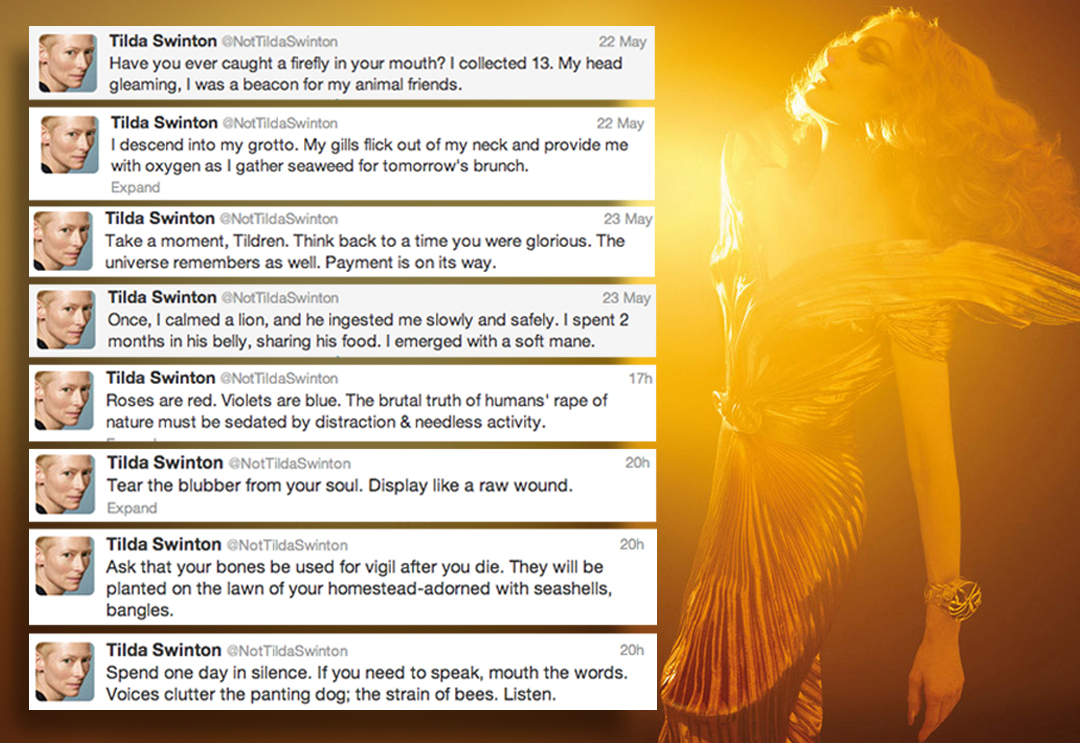 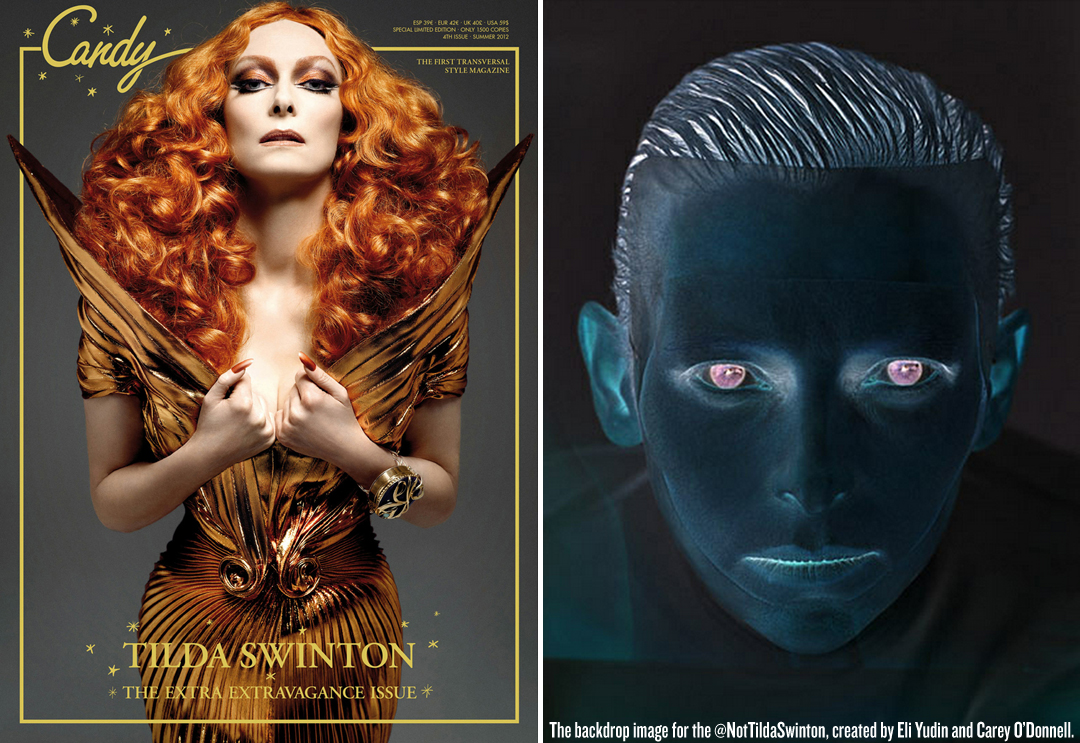