Back in 2001, renowned scientist and neuroeconomist Paul Zak, Ph.D., (what is neuroeconomics?) started researching the then poorly-understood molecule oxytocin (found only in the brains of mammals and nowhere else in the natural world) which is responsible for uterus contractions during mammalian birth as well as milk flow during breastfeeding.  His curiosity centered on one question: what else could this ancient nurturing chemical be doing inside of us?  What he discovered would go on to rewrite everything we thought we knew about love, morality, sex, monogamy, promiscuity, social dynamics, and the human experience as a whole.  His research showed that oxytocin is the governing “connection” molecule in human beings.

It makes us care about our romantic partners, our kids, and our pets. But here’s the weird part: when the brain releases oxytocin we connect to complete strangers and care about them in tangible ways. Like giving them money.  It was so easy, my experiments showed, to get the brain to make oxytocin. Touching, dancing, praying, and even a simple signal of trust by another caused the brain to synthesize oxytocin and make us care about others’ welfare. I started calling oxytocin the “moral molecule” because the hallmark of moral behavior is care for another. What a curious molecule!

Care is the foundation of love, and by extension, you cannot love someone that you don’t care about. But why on Earth is love oftentimes so hard — in many cases intangible for so many people — if this molecule is so present in the mammalian brain?  Well, the Catch-22 is this: evolution blessed us not only with monogamous brains, but also with extremely promiscuous genitals.  When mating, the oxytocin response level taking place in your brain (sex is a highly potent oxytocin stimulus) will determine whether or not you stay with your mating partner for at least a short time and perhaps forever.  The human penis, however, is designed to not only deliver sperm, but also scoop out and remove competing sperm as well.  Yes folks, both men and women evolved to be promiscuous.

This is where love becomes infinitely complex.  The genetic code of humans is nearly identical to the bonobo chimpanzee of central Africa, well known for having sex with both sexes — any place, anytime, anywhere.  One of the freest of all mammals, the bonobo’s motto is “if it feels good, do it.”  Humans, meanwhile, worry incessantly and appropriately if he or she cares about us, or is just using us for a quickie.  Our brain’s big clump of oxytocin receptors craves a connection with a fellow human who cares about us, and one that we can love in return.  Love, as it turns out, is as essential to our life diet as food and water.

Paul Zak’s research analyzed thousands of test subjects, and proved that approximately 95% of us are wired for love (i.e. when shown care, oxytocin levels surge and love is reciprocated in return).  But roughly 5% of the population have a dysfunctional oxytocin system (i.e. the molecule is not released when care is accorded to them, and they don’t seem to feel empathy for others).  This 5% have a huge list of sexual partners, and are unable to connect with others for very long — sometimes never.  Adding to the complexity is the fact that the all-time favorite hormone of 50% of the human race is a powerful oxytocin blocker: testosterone.  Zak’s experiments revealed that when men were administered testosterone, these alpha males showed spikes in selfishness and self-entitlement when compared to their same behaviour when they were not pumped up on testosterone.  For these high-testosterone guys (NOTE: men have 10-times more testosterone than women, although a very small percentage of women do exhibit high levels as well) it’s as if their brains are screaming “It doesn’t get much better than this!” (with index fingers pointing to their crotches).

Furthermore, in every single experiment he conducted, women released much higher levels of oxytocin than men, and were thereby more generous, trustworthy, and empathic.  This is the science behind why women are often nicer than men, connect more easily to others, and yes — why women tear up at the movies more often than guys.  One of the most fascinating results of his research also revealed how when women are ovulating they become “oxytocin sponges,” and their brains increase the number of receptors for the molecule, resulting in a multiplication of the molecule’s effect.  Women are more likely to have amorous adventures during ovulation, both with their partners and with other women’s partners.

Beginning in middle age, testosterone levels begin to drop off in males.  Levels also drop in males when the man is in a committed relationship (both opposite-sex and same-sex relationships), and drop even further when the relationship produces children.  So guys, the next time you find yourself doing four loads of laundry while washing a huge batch of dishes, concerned that your testosterone levels are too low, realize this: it’s that same low level of testosterone that is permitting oxytocin’s effects to flourish, thereby allowing you to reap all the rewards and benefits of a loving relationship, as well as turning you into a nurturing machine for your children — just when they need it the most.

Paul Zak’s research has proven that our brains are marinating in a sea of hormones, which can oftentimes make our pursuit of love a baffling contradiction.  His advice for increasing your chances at finding it is to avoid looking for the ‘perfect’ partner, and focus your energy on finding someone who “wants to trade oxytocin with you.”  Sounds strange in written terms, but his groundbreaking research has proven that once that free trade gets flowing, it doesn’t take much work to keep it flowing, and in many ways takes on a life — and love — of its own.

Paul Zak (Ph.D. in Economics, University of Pennsylvania) is a renowned neuroeconomist, professor, member of the Loma Linda University Medical Center Neurology Departmenty, and Director of the Center for Neuroeconomics Studies at Claremont Graduate University.  Over the course of the past decade, Zak’s groundbreaking brain imaging research was the first to discover the role of the molecule oxytocin in mediating trusting behaviors between unacquainted humans, and has been hailed as “one of the most profound discoveries in modern science.”  His latest book, The Moral Molecule: The Source Of Love And Prosperity, was published on May 10, 2012 by Dutton.  You can pick up your own copy via Amazon.  To learn more about the extraordinary work of Paul Zak be sure to visit MoralMolecule.com and follow him on Facebook.  For more information on the Center for Neuroeconomics Studies you can visit NeuroeconomicStudies.org.

SEE ALSO: Paul Zak On Why Gay Marriage Is Natural 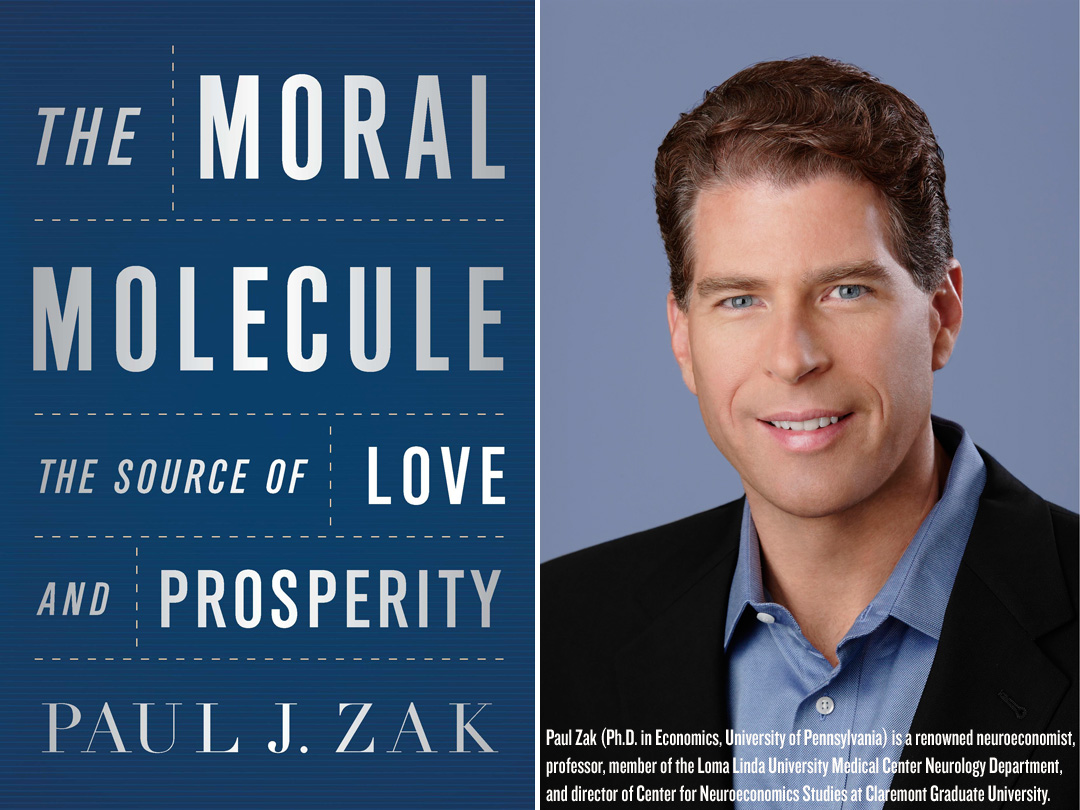 Previous post:
Neuropsychologist Rick Hanson, Ph.D, On The Science Of Meaning And Finding Your “North Star” Next Post:
Banner Photo #77: SpaceX™ Could Launch Its Gamechanging Dragon Spacecraft This Coming Saturday