Legendary Harvard Sociobiologist E.O. Wilson Pens A Stunning Essay On “The Origin Of The Arts”

Famed Harvard sociobiologist E.O. Wilson recently penned a stunning piece in Harvard Magazine entitled “On The Origin Of The Arts” where he elegantly walks the reader through the evolution of the sciences and the arts, and argues for a renewed commitment to bridge these two domains in order to gain access to much higher levels of discovery and wonder.

E. O. Wilson once famously said that “the elegance, we can fairly say the beauty, of any particular scientific generalization is measured by its simplicity relative to the number of phenomena it can explain.”  And his longtime call to foster more connection between the arts and the sciences is something that has been gaining major steam in recent years by other reputable names, including neuroscientist and author Jonah Lehrer (IMAGINE: How Creativity Works; published by Houghton Mifflin Harcourt, 2012) who has spoken about a “fourth culture of knowledge”.  Lehrer writes:

“Since the fading of the original Enlightenment during the late eighteenth and early nineteenth centuries, stubborn impasse has existed in the consilience of the humanities and natural sciences. One way to break it is to collate the creative process and writing styles of literature and scientific research. This might not prove so difficult as it first seems. Innovators in both of two domains are basically dreamers and storytellers. In the early stages of creation of both art and science, everything in the mind is a story.” (You can read FEELguide’s profile of Jonah Lehrer’s IMAGINE: How Creativity Works by CLICKING HERE).

In his stunning Harvard Magazine piece, Wilson lays out his brilliant reasoning that what counts in science is the importance of the discovery, and what matters in literature is the originality and power of the metaphor.  But perhaps the most beautiful segment of Wilson’s essay lies in his articulation of art, at the heart of which is a sentiment common to the greatest definitions of science and of philosophy: “A quality of great art is its ability to guide attention from one of its parts to another in a manner that pleases, informs, and provokes.”  Wilson has also written:

“If ever there was a reason for bringing the humanities and science closer together, it is the need to understand the true nature of the human sensory world, as contrasted with that seen by the rest of life. But there is another, even more important reason to move toward consilience among the great branches of learning. Substantial evidence now exists that human social behavior arose genetically by multilevel evolution. If this interpretation is correct, and a growing number of evolutionary biologists and anthropologists believe it is, we can expect a continuing conflict between components of behavior favored by individual selection and those favored by group selection. Selection at the individual level tends to create competitiveness and selfish behavior among group members—in status, mating, and the securing of resources. In opposition, selection between groups tends to create selfless behavior, expressed in greater generosity and altruism, which in turn promote stronger cohesion and strength of the group as a whole.”

You can read E.O. Wilson’s brilliant essay “On The Origin Of The Arts” in full by visiting Harvard Magazine.  For more great finds such as this be sure to visit BrainPickings.org, and get LIVE updates from Brain Pickings via Facebook and Twitter.  I also dug up this old UCSD lecture where Wilson elaborates on the very same ideas presented in his brand new Harvard essay, and you can watch it below. 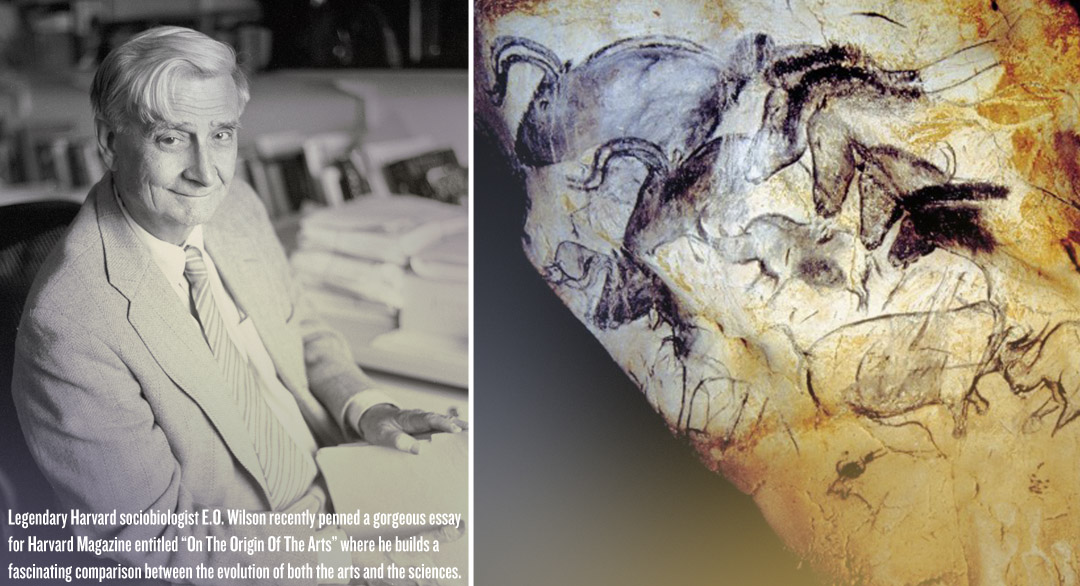 Previous post:
Watch Alfred Hitchcock Share His Thoughts On His Definition Of Happiness In Old Television Interview Next Post:
More Amazingness From GRIMES: Check Out Her Brand New Hellraising Video For “Nightmusic”