In The Foothills Of Infinity: PHILOSOPHY NOW Reviews David Deutsch’s Extraordinary “The Beginning Of Infinity”

I first heard about David Deutsch‘s critically acclaimed new book The Beginning Of Infinity from philosopher and futurist Jason Silva (one of FEELguide‘s favorite minds in the world) who mentioned it in his exceptional video vignette which you can watch below.  Recently on his Facebook page, Jason posted a brilliant review of the book courtesy of Sir Alistair MacFarlane in PHILOSOPHY NOW.  The following is an excerpt:

“Everyone who is interested in the relationships between science and philosophy should read this book. Its central claim is that all progress, theoretical and practical, scientific, philosophical and cultural, results from a single human activity: a quest for good explanations.  In making such a comprehensive claim, the book necessarily covers a huge range of topics. There are three main threads. First is a coherent and comprehensive exposition of Karl Popper’s philosophy, that knowledge (i.e. successful explanation) arises only from a process of conjecture and refutation. The scope here is wide-ranging and the presentation lucid, but the alternative views of most other philosophers receives very short shrift indeed. The second thread is a realist explanation of quantum theory, positing the existence of the multiverse. Deutsch is well known for his own work at Oxford on the development of quantum computers, which is seen as offering computational technology of such power and scope that it will transform our future development in hitherto unimaginable ways. From this follows the third thread, and the reason for the title of the book – the contention that the reach of good explanations is unbounded, and so our future development will be subject only to those limits imposed by scientific laws, and is otherwise potentially infinite.”

You can read the entire glowing review by visiting PHILOSOPHY NOW, and be sure to follow the magazine on Facebook and Twitter.  To pick up your own copy of David Deutsch’s The Beginning Of Infinity CLICK HERE (where you can also pick up his equally amazing The Fabric Of Reality), and check out the book’s website at BeginningOfInfinity.com.  David Deutsch, FRS (born 1953) is an Israeli-British physicist at the University of Oxford, and is a non-stipendiary Visiting Professor in the Department of Atomic and Laser Physics at the Centre for Quantum Computation (CQC) in the Clarendon Laboratory of the University of Oxford. He pioneered the field of quantum computation by being the first person to formulate a description for a quantum Turing machine, as well as specifying an algorithm designed to run on a quantum computer.  He is also a proponent of the many-worlds interpretation of quantum mechanics.  For more great discoveries such as this be sure to visit Jason Silva’s website at ThisIsJasonSilva.com, check out his brilliant Vimeo page, and follow him on Facebook and Twitter.  For some of my favorite windows of wisdom from Jason be sure to visit Jason Silva on FEELguide. 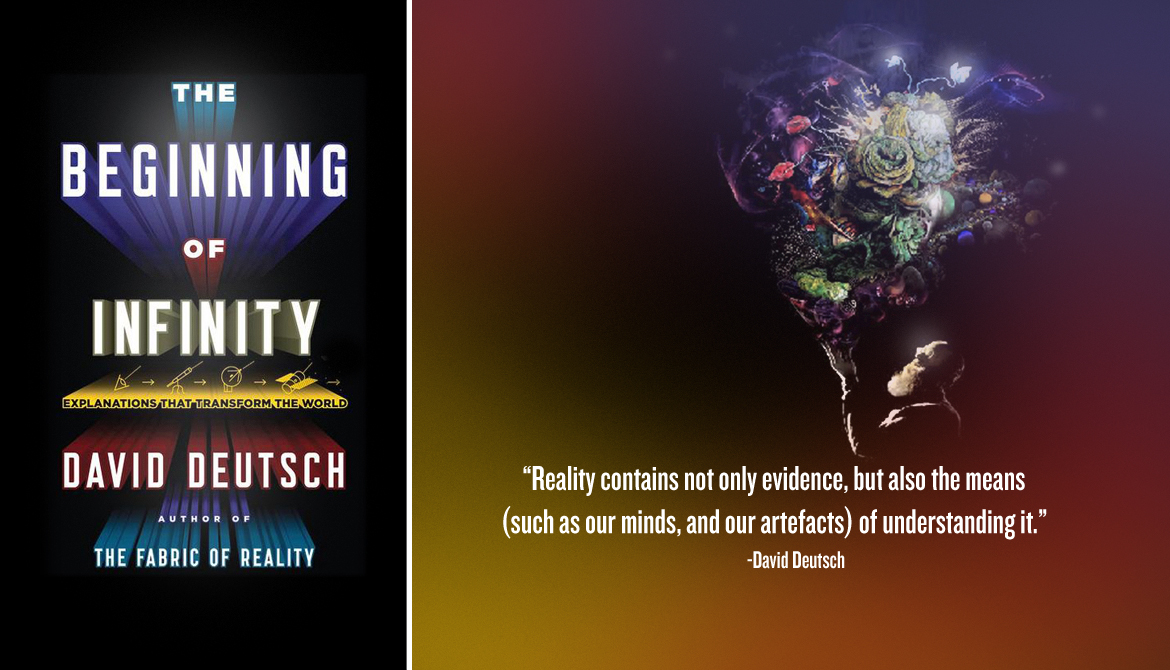