When I saw this article in the Guardian  I had to scratch my head because I honestly did not even think this was possible — a pair of twins of opposite color.  As part of their upcoming season of Mixed Race, BBC2 is about to tell the story of James and Daniel Kelly, a pair of twin brothers born on March 27, 1993 as part of the episode entitled “Twincredibles“.  What caught the attention of the show’s producers is the fact that even though they’re twin brothers, the boys could not be more different.  The following is an excerpt from the Guardian profile:

On the left is James: he’s black, he’s gay, he’s gregarious, and he’s academic. He’s taking three A-levels next summer, and wants to go to university. Daniel, sitting beside him, is white. He’s straight, he’s shy, and he didn’t enjoy school at all. He left after taking GCSEs, and hopes that his next move will be an apprenticeship in engineering.

So, given that they are diametrically opposed, there is one truly surprising thing about James and Daniel. They are twins. They were born on 27 March 1993, the sons of Alyson and Errol Kelly, who live in south-east London. And from the start, it was obvious to everyone that they were the complete flipside of identical. “They were chalk and cheese, right from the word go,” says Alyson. “It was hard to believe they were even brothers, let alone twins.”

… Primary school passed without colour being an issue: but, says Alyson, everything changed when they went to secondary school. And at this point the boys, too, add their voices: because the racism they encountered there had a huge effect on them, and on what happened to them next.

To read the entire fascinating story be sure to visit the Guardian.  The Kellys and their story is told in”Twincredibles”, part of BBC2’s Mixed Race season in October.  To read the BBC press release for “Twincredibles” simply head over to the BBC. 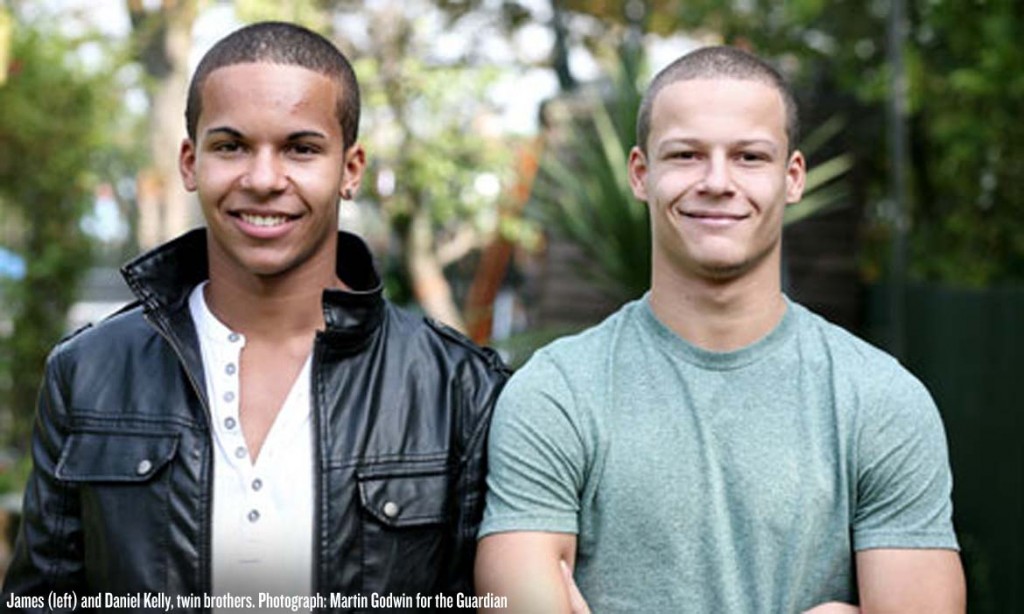 Previous post:
LINKguide (September 28, 2011) Next Post:
New Film “Finding Joe” Enters The Mind Of Joseph Campbell And How His “Hero’s Journey” Philosophy Can Transform Your Life