During my final year of Architecture I completed my thesis entitled “Architecture For An Expanding Universe”.  The second half of my thesis focused on the question: “What is the role of architecture in a world of intense cosmological discovery, and what are the implications of this mind-expanding knowledge on our built world?” To get to this point I spent the first half of that year working on a theoretical investigation of New York City and the role of the “flaneur”, a term coined by Charles Baudelaire (1821-1867) from his musings on Paris (the word is a derivation of the French masculine noun flâneur—which has the basic meanings of “stroller”, “lounger”). Following the 1848 Revolution in France, after which the empire was reestablished with clearly bourgeois pretensions of “order” and “morals”, Baudelaire began asserting that traditional art was inadequate for the new dynamic complications of modern life.  Social and economic changes brought by industrialization demanded that the artist immerse himself in the metropolis and become, in Baudelaire’s phrase, “a botanist of the sidewalk … a person who walks the city in order to experience it”. The term flaneur was eventually borrowed by Walter Benjamin in his concepts of the urban observer as both an analytical tool and a lifestyle:

“The crowd is [the flaneur’s] element, as the air is that of birds and water of fishes.  His passion and profession are to become one flesh with the crowd.  For the perfect flaneur, for the passionate spectator, it is an immense job to set up house in the middle of the multitude, amid the ebb and flow of movement, in the midst of the fugitive and the infinite.”

Before beginning my thesis, I had spent the previous summer of 1999 living in New York and was so fascinated by the effect it had on me that I wanted to dig deeper into the one aspect that occupied my thoughts the most: my own experiences as a flaneur in the Big Apple.  New York is unlike anywhere else on earth because it has become the most powerful incubabator of modern mythology in the world.  I am not exaggerating when I tell you I had quite a few tantric experiences walking those streets — countless hours of destinationless wandering with one mission: to discover and observe as much as humanly possible about this marvelous urban machine.  Like a whale opening its mouth up as wide as it could, I strung my days together gorging myself on vignettes of Gotham that were as immersive as they were cinematic, and part of the reason they took on this cinematic color was music.

One piece of music I listened to that summer during those New York wanderings was Philip Glass Symphony No. 4 “Heroes”, in particular the first track entitled The Light. Yesterday afternoon I was walking through downtown Montreal while listening to The Light (the full 24-minute version of this track can be purchased HERE) and was thrown right back into my flaneur bubble.  The following video give you only the first 4.5 minutes of the full 24-minute piece (it really gets moving around the 6:00 mark which you will have to buy/download in order to hear: I’m sorry, I couldn’t find the full piece anywhere online). But needless to say I highly recommend you get the full version, head downtown, and test it out for yourself.  I promise you will be amazed by the discoveries you make of the urban universe all around you. 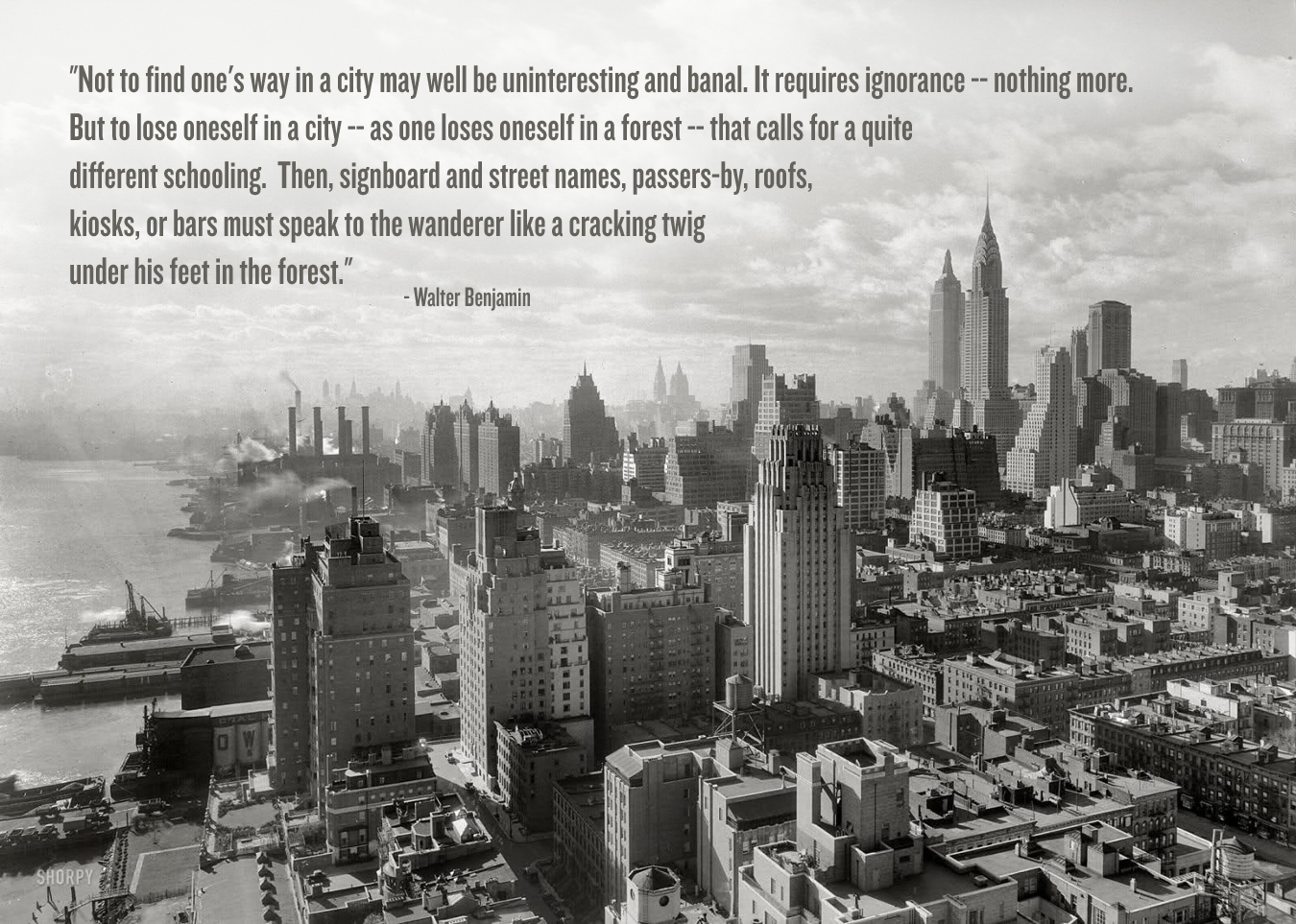