Mondomedeusah just posted this Twitpic of Alice Cooper and Salvador Dali (1904-1989) at some sort of press conference and I still can’t quite wrap my head around the wtf-edness of this unlikely friendship.  After some digging I learned that Dali was actually a ginormous Alice Cooper fan, and after seeing Cooper perform at a 1973 concert (when Dali was 69 and Cooper was 25), Dali invited Alice to sit and pose for a holographic art piece he was inspired to make.  At the press conference, Alice said that he loved the confusion that Dali portrayed in his work to which Dali said that “confusion was the perfect form of communication!” Entitled “First Cylindric Chromo-Hologram Portrait of Alice Cooper’s Brain”, the piece:

“… depicts a three-dimensional Alice Cooper wearing two million dollars worth of jewelry including a tiara and necklace while holding a statuette of Venus De Milo as if it were a microphone. A plaster sculpture of Alice’s brain, topped by a chocolate éclair covered in ants, another Dalí oeuvre, was placed behind the cross-legged rock star and the set-up was documented by Dalí using (then) cutting-edge hologram technology.”

I dug a little deeper and on found an article over at SickThingsUK where Cooper described how the two met. He tells the story of how Dali invited him and his manager Shep Gordon over to the Saint Regis Hotel.  Cooper said:

“We met in the bar. Gala (his wife) comes first. She’s dressed in a full tuxedo. She looks exactly like Fred Astaire – top hat, cane, spats. I went ‘WOW!’ Then about six boys and girls — or whatever they were — about 16 or 17 years old, came in. These creatures he had with him were like something out of ‘Satyricon’. They were dressed in a lot of silk. Flowing things, loose things. They didn’t say anything but they were real pretty. I had this vision of Count Dracula and his wives. They kind of floated around the room. Then Dali comes in. He said, ‘I am the great and grand Dali!’ And I said ‘Hi, I`m Alice Cooper.’ I felt like Jerry Lewis, you know.” Dali wore purple crushed velvet pants; a pair of gold elastic shoes [where the toes go up to the end]; a pair of purple glitter socks that Elvis gave him; a giraffe-skin coat; his usual moustache; and sideburns “kind of up in pincurls.” The preferred cocktail for the evening (and for the entire entourage) was The Scorpion. Each Scorpion drink came in a bowl with lilacs floating inside. Dali ordered a glass of hot water. “He pulled a jar of honey out of his pocket and started pouring the honey in. He filled it up and up and up until he had this long strand of honey, then with his right hand he reaches into his other pocket and pulls out a pair of scissors and cuts the honey. Alice looked at his manager Shep and said, “We’re in trouble. This guy is out there.”

How the hell did I not know about this?  I thought I knew everything there was to know about Dali, but the man still continues to blow my mind.  Even though the hologram love letter to Cooper will never make it to the Platinum East Wing section of the World’s Most Important Museum For The Most Important Artworks Ever Created In The History Of Important Art, it still gives us an amazing glimpse at the tail end of one of the twentieth century’s most fascinating characters. 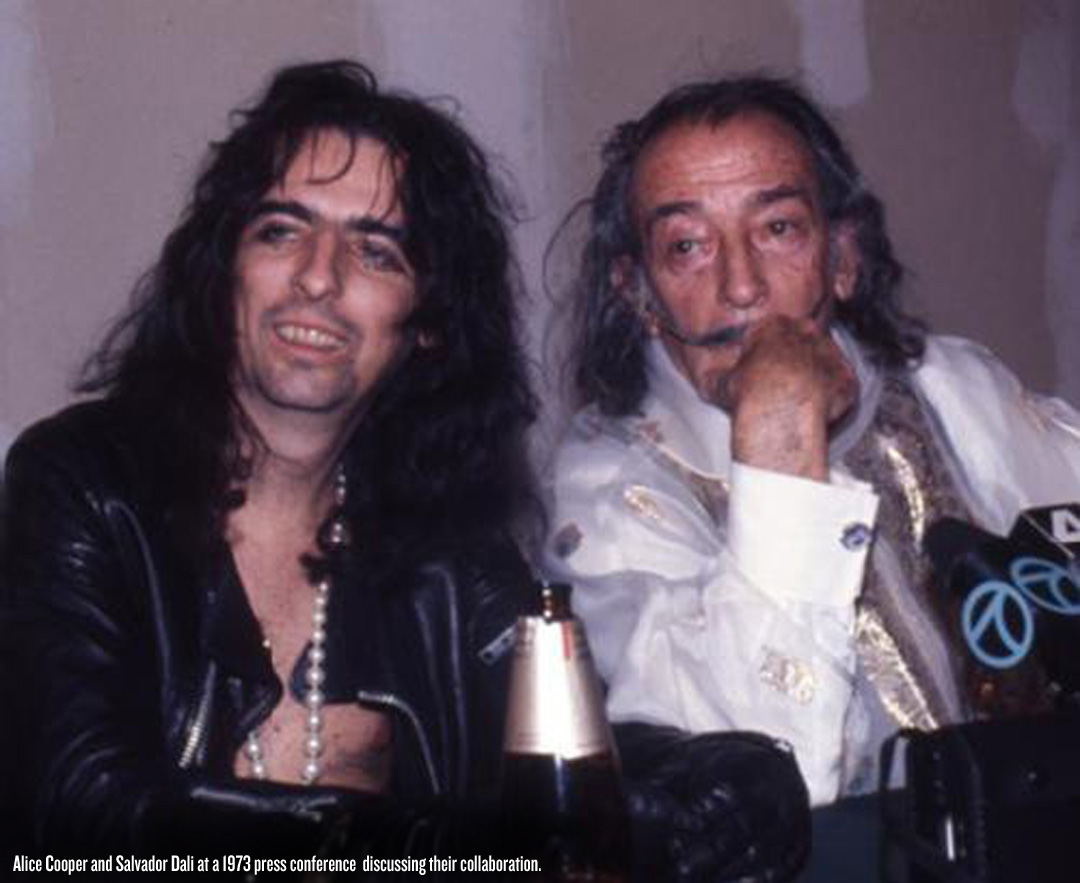 Previous post:
The Dreamlike Miniature Worlds Of Thomas Doyle Are A Fascinating Study Of Memory, God, And The Fog Of Time Next Post:
21-Year-Old Stanley Kubrick’s First Assignment As A Photojournalist For The 1949 Story “Chicago: A City Of Contrasts”