Hans Zimmer (born September 12, 1957) is a German composer and music producer.  For nearly three decades he has composed music for over 100 films including Rain Man, The Lion King, Crimson Tide, The Thin Red Line, Gladiator, The Last Samurai, Pirates of the Caribbean series, The Da Vinci Code, Frost/Nixon, The Dark Knight, Sherlock Holmes and INCEPTION.  Zimmer spent the early part of his career in the United Kingdom before moving to the United States.

He is the head of the film music division at DreamWorks Studios (in other words, Spielberg needs him like a fish needs water), and works with other composers through the company which he founded, Remote Control Productions.  His works are notable for integrating existing sampling elements within the traditional orchestral arrangements. He has won four Grammy Awards, two Golden Globes, a Classical BRIT Award, and an Academy Award.

Hans Zimmer ranked #72 in The Daily Telegraph’s list of The Top 100 Living Geniuses.

The climax of Zimmer’s INCEPTION score is his piece entitled “Time”.  I encourage you to play this on the loudest speakers possible and listen at least a few times.  This is hands down, one of the most impressive film scores of all time:

The New York Times sat down with Zimmer not long after INCEPTION was released and he revealed a brilliant backstory to the score’s haunting, repetitive, deep horns which pop up throughout the film (read the complete interview with The New York Times).  As the film progresses, the characters assemble to form a “dream team”: experts on going deep inside people’s minds to extract secrets, or even to “incept” a person with an idea that will grow into a thought once the person awakes, which will eventually manifest as action, eventually altering the person’s life forever (and getting them to do whatever the client wants them to do without ever knowing they’ve been manipulated). As you go deeper and deeper into different layers of the dream world, time moves exponentially slower at each level (10 hours in the real world could feel like anywhere from a week to 50 years in the dream world depending on how deep you go in).  Zimmer used Edith Piaf’s “Non, Je Ne Regrette Rien” as the anchor for the film’s “kick” scenes (where music is played for the sleeping ‘extractors’ as a signal to pull them out of the dream world and back into the living realm).  He also manipulates the song to get the deep, slow, haunting horns which pop up at pivotal moments throughout the film (see video below for explanation).  For quality purposes, Zimmer wanted to track down the original master copy of Piaf’s recording which was housed in La Bibliotheque Nationale in Paris.  Zimmer was eventually granted permission to make an exact duplicate using state of the art technology.

The concept of regret is central the story of INCEPTION as Leonardo DiCaprio’s character’s own regrets about the events that led up to his wife’s death (played by Marion Cotillard) end up having a detrimental effect on his life and the life of his team members as they go deeper and deeper into the realm of the human mind (and his own subconscious) where time is slowed down more and more the deeper you enter the dreams within the dreams.  To see how Zimmer cleverly (and subliminally) expresses both time and regret in the film’s score, watch this explanation: 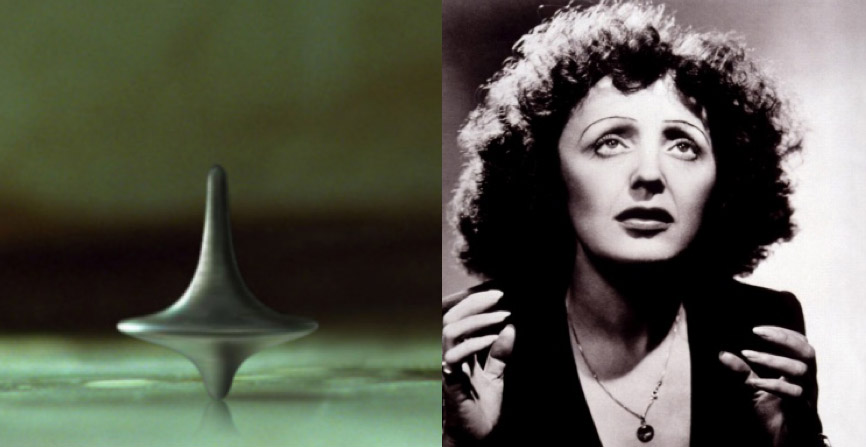 Also, here’s Zimmer and Christopher Nolan explaining the process of creating the soundtrack for “The Dark Knight”: