“Tree Of Life” Producer Holding Test Screenings In His Home, Still Waiting For My Invitation

The amazing citizenry over at The Playlist just posted this article about Bill Pohlad.  He’s the producer of Terence Malick’s upcoming epic “The Tree Of Life“, which according to Fox Searchlight will be released in 2011.  Terence Malick is a notorious perfectionist and refuses to be pinned-down to release dates.  He has so much respect in the industry, that producers are willing to give him free reign from not just release dates, but even film festivals such as Toronto or Cannes.  From what we’ve heard, “Tree Of Life” is going to blow people’s minds wide open, and we can’t wait.  What’s interesting about the article is that Mr. Pohlad has begun hosting free screenings of the film IN HIS MINNEAPOLIS HOME to guage audience reaction!!!  I just bought my plane ticket to Minneapolis a few minutes ago and using a “Guide To The Famous Producers Of Minneapolis” star map that I tracked down I will be showing up at Bill’s home soon with my posters of Brad Pitt and Sean Penn and my Sharpie marker pen.  Read the full article at The Playlist. 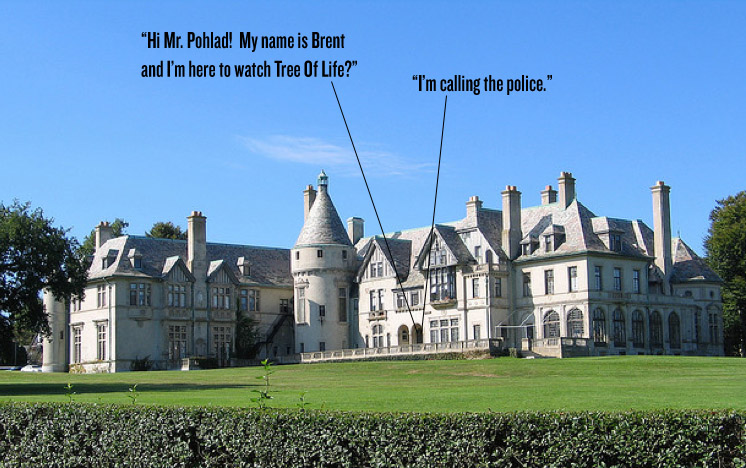 One Response to “Tree Of Life” Producer Holding Test Screenings In His Home, Still Waiting For My Invitation