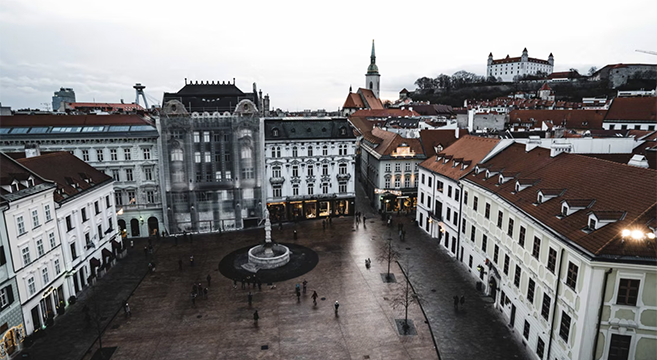 What Is There To Do In Bratislava? Here Are 6 Ideas

Bratislava, the capital of Slovakia, is a charming city that, despite its small size, has much to offer visitors. Travelers come for the stunning architecture, historic sites, and cultural activities, but Bratislava is also one of the best places for outdoor activities in Europe. Here are the best things to do in Bratislava.

Bratislava is one of the most well-preserved cities in Europe, and it is also the capital of Slovakia. The city has many historical monuments from different periods, which makes it a perfect destination for those who want to experience the history of Europe. The city is often referred to as the Pearl of the Danube for its beautiful architecture, rich history, and cultural attractions. The city attracts a number of visitors due to its cultural heritage and many historical sites.

Bratislava is also home to many museums, galleries, and art institutions that are worth visiting. Moreover, thanks to its proximity to the Austrian border, it is relatively easy to get a taxi from Bratislava to Vienna. You can add additional stops to your trip without worrying about the time or cost of traveling to multiple destinations. Nevertheless, the main attraction when in Slovakia is undoubtedly its fantastic capital. But what is there to see and do once you arrive?

Take A River Tour Of The Mighty Danube

The Danube is a river that runs through Europe and Asia and is the second-longest river in Europe after the Volga River. The Danube is not only one of the most important rivers in Europe but also one of the most famous rivers in the world. It has been featured in many films and TV series such as The Bourne Identity, The Amazing Race, and Game of Thrones. The Danube River is a fantastic place to visit, especially if you want to see the city from a different perspective. A river tour will allow you to see Bratislava from the water and get an insight into its history, culture, architecture, and other aspects of life in Slovakia. A river tour also takes you around Bratislava’s Old Town, nicely leading to the next point!

The old town is one of the most popular tourist attractions in Bratislava and is a place where you can find many interesting historical sights and buildings. It is home to many historical sights, buildings, and museums. There are sites that have been here since before the 12th century and have a unique mixture of Germanic and Slavic architecture due to its storied history. It is so popular thanks to its highly scenic sites that transport you back to medieval times when it was a crossroads of Europe. Moreover, it is far less crowded than other European capitals making it the perfect place to unwind and watch the world go by. Michael’s Gate is just one of the major attractions in the old town. From the top of the tower, you can enjoy one of the most breathtaking views in the city.

The Cathedral of St Martin is a masterpiece of Gothic architecture. Although it has been around in one form or another since the 12th century, it was finally completed in 1452. It has been central to the coronation of numerous Hungarian kings during its history. The cathedral has been damaged several times due to different wars and natural disasters, but it has always been rebuilt again and is an important holy site for many Bratislavians. It has also been named among the most important works of Gothic art in Europe. While it can only be truly appreciated by heading inside, you can still marvel at its beautiful exterior if you are passing by.

View The Famous Statues Of Bratislava

The statues of Bratislava are a collection of sculptures erected in the city over the course of hundreds of years. Of all of the figures present, there are some which you really must see, including:

The statues represent figures from Slovak history, but they also have a very European flair to them, with their features and clothing resembling those found in France and Italy. They are scattered around the city, and you can make a day of exploring the city and locating each famous statue.

The Heydukova Street Synagogue, located in the heart of Bratislava, is an architectural gem. It is one of the most important synagogues in all of Europe and the largest surviving medieval synagogue in Central Europe. No matter your religious affiliation, everyone can appreciate gorgeous architecture when they see it, and this synagogue is no different. With its brutalist style created by the architect Artur Szalatnai after completing his studies in Budapest, it stands out as a genuine landmark of the city. The synagogue also houses a museum and houses a collection of Jewish artifacts, including paintings, sculptures, and ceremonial objects. By visiting, you can gain an understanding of Jewish history in Europe.

For those looking for a true fairy tale church, you can look no further than the famous blue church of Bratislava. The Blue Church is an old church built between 1908 and 1913 and has a blue-painted exterior that gives it its name. Its official name is the Church of St Elizabeth of Hungary, and it creates a striking image in Bratislava’s old town thanks to its art nouveau styling. The Blue Church is easily ignored by a first-time traveler because it is located a bit further from the main section of the historical town and is flanked by modern structures. However, once you make your way there, it will astound you. Among the many churches in Bratislava, this gleaming treasure of Hungarian secessionist style stands out.

As with many other European cities, the architecture of Bratislava is highly influenced by neighboring Austria and the proximity of Vienna. The city’s Old Town is one of the most well-preserved historic city centers in Europe. However, unlike other capitals of the region, you will find a slower pace of life here and an extraordinary number of hidden gems.

Previous post:
How To Honor The Memory Of A Deceased Loved One Next Post:
CBD Dosage: How Much CBD Oil Should You Take for Pain, Anxiety and Sleep