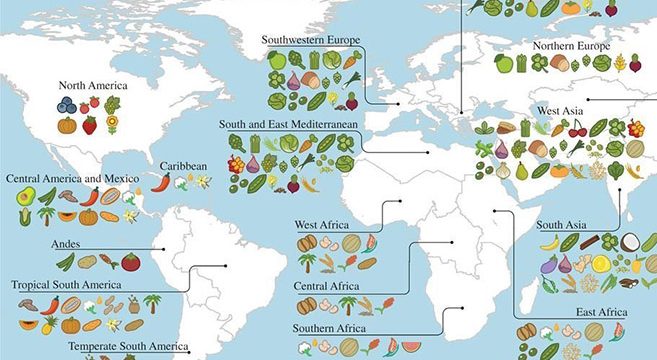 Colin Khoury is a plant scientist at the International Center for Tropical Agriculture (CIAT) and the U.S. Department of Agriculture. He is the lead researcher behind a fascinating new study which has pinpointed the precise centers of origins of all the world’s 151 major crop species. In the study’s abstract, the researchers write: “Research into the origins of food plants has led to the recognition that specific geographical regions around the world have been of particular importance to the development of agricultural crops. Yet the relative contributions of these different regions in the context of current food systems have not been quantified. Here we determine the origins (‘primary regions of diversity’) of the crops comprising the food supplies and agricultural production of countries worldwide. We estimate the degree to which countries use crops from regions of diversity other than their own (‘foreign crops’), and quantify changes in this usage over the past 50 years. Countries are highly interconnected with regard to primary regions of diversity of the crops they cultivate and/or consume. Foreign crops are extensively used in food supplies (68.7% of national food supplies as a global mean are derived from foreign crops) and production systems (69.3% of crops grown are foreign). Foreign crop usage has increased significantly over the past 50 years, including in countries with high indigenous crop diversity. The results provide a novel perspective on the ongoing globalization of food systems worldwide, and bolster evidence for the importance of international collaboration on genetic resource conservation and exchange.” You can read the full study HERE, and check out some of the incredible data map below. (Sources: Kottke, NPR)
.
CLICK IMAGE TO ENLARGE: 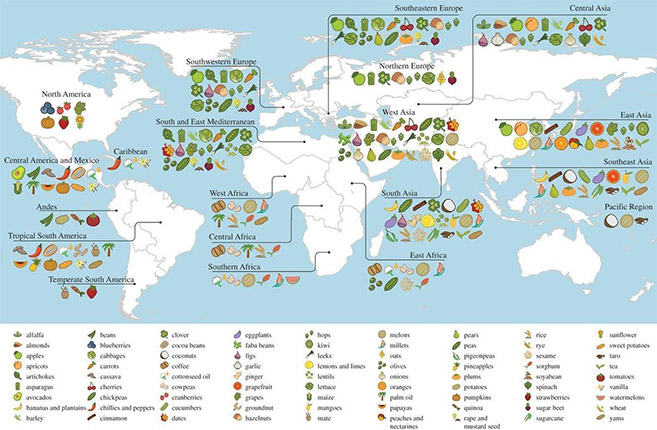 Previous post:
Meet The Americans Ditching Loud & Hectic Normality For A Life Of All Natural Off-The-Grid Bliss Next Post:
New Study Published By The American Psychological Association Confirms Straight People Do Not Exist