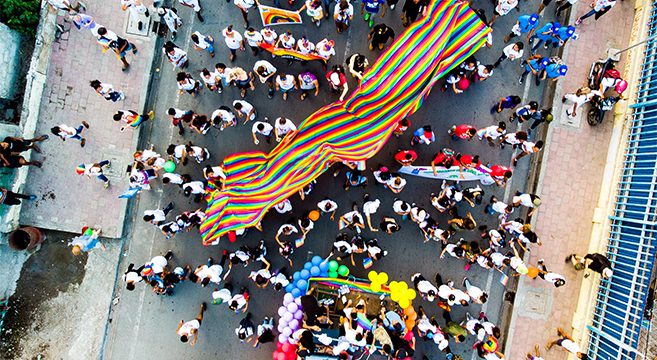 The Top LGBT-Friendly Universities In The UK

By Michael Turner ☛ Gay-friendly universities are becoming increasingly popular nowadays, making minorities’ lives easier and communities happier. A sense of closeness, intimacy, and trust is developed when ideas worth discussing are promoted within students, which is why the number of LGBT friendly universities is growing each year. According to topuniversities.com, no less than 158 UK universities are currently inclusive, a few out of which are known to score an easy nine on a 10-scale.

Stonewall has recently developed an online guide that measures more than 120 universities against a 10-point checklist, studying each university’s degree of gay-friendliness and openness to improvement. The lobby group did not publish a gay Ivy League list, arguing that “gay friendly” could have different meanings for different students. Some students are interested in having a small supportive community by their side (a community that allows them to express themselves), while others might feel the need to participate in a wider gay scene at events, parties, or even college clubs.

This is the 10 criteria Stonewall looked for in their studies – if you are interested in helping your university join the best universities for LGBT students list, take a quick look to see where to begin. These ten checkpoints are already implemented at top-notch LGBT friendly schools in the United Kingdom.

If you are on the directing side of the story and want to help your campus become more gay-friendly, you should start by providing the right resources for the right people, especially if stigma is still in place at your school. That means, talk to kids about resources that can make them feel comfortable, and talk to faculty about ways to help them succeed!

Many Greek organizations in the United States give out the impression of “straightness” wherever you go. If you can get them to think outside the box and become LGBT-inclusive, your campus will look so much more united and alive!

Another important thing you might want to consider is the curriculum. If you are truly big on making a change, start offering classes that cover LGBT issues and debates – give students the opportunity to understand themselves even better than before.

Providing LGBT trainings for students as well as staff will add to the diverse setting of the campus. For instance, Augsburg College in the United States offers LGBTQIA training to students, staff, and faculty to make sure that their college campus culture stays inclusive for everyone!

As you can see, the number of LGBT-friendly universities is quickly increasing in the UK as well as in the US, which is nothing but promising for our future! Make sure you – whether a professor, staff member, or faculty – make it easy for them to be included in the community and part of the campus life. Let’s all make it inclusive!

Bio of Michael Turner: A former speaker at United Nations, Michael Turner is an arduous supporter of LGBT rights on college campuses. His lifetime work has focused on bringing these topics into discussion. Michael is now the author of two books on LGBT-related issues and is currently writing the third one.

Previous post:
Travel As A Moral Imperative & Why Design & Travel Must Be Added As 3rd & 4th Pillars Of Education Next Post:
How Good Sleep Helps to Reduce Anxiety