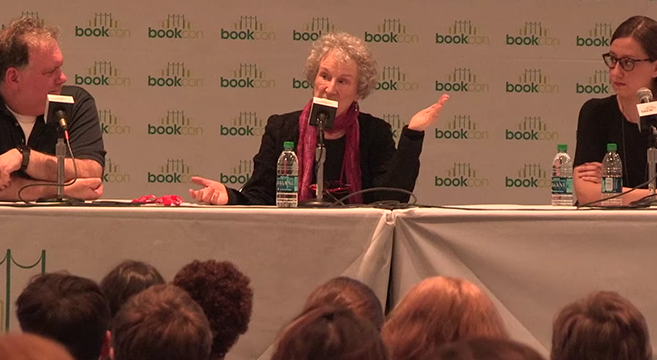 Margaret Atwood: If The State Denies You An Abortion Then Sue For All Expenses Incurred

During a Q&A session at BookCon where she and Handmaid’s Tale showrunner Bruce Miller were discussing The Handmaid’s Tale, Margaret Atwood was asked a question from an audience member about what she thinks might be coming down the road in American far-right politics, in particular the state of Texas where it’s virtually impossible for a woman to get an abortion.

AUDIENCE QUESTION: “Today in our country we are seeing an administration that is moving farther and farther to the right and becoming more and more a handmaiden to the megarich and to the religious extremists who also dwell among us. Having said all this, I remember 1980 very well. I remember Jerry Falwell, and all the television preachers. Where do we go from here? I mean, we’re one Supreme Court seat from overturning gay marriage, and it’s virtually impossible for a woman to have an abortion in the state of Texas today–even if it means her dying not getting it. What do you think is going to happen now?”

MARGARET ATWOOD: “Sometimes people have to live their dream. And if living their dream means a lot of dead women and orphans, maybe they’re going to have to live that dream, and figure out who’s going to pay for this. Who’s going to pay for the orphans and the dead women because that’s what you’re going to have. I’m waiting for the first lawsuit in which the family of the dead woman sues the state, and I’m also waiting for a lawsuit that says, ‘If you force me to have children that I cannot afford then you should pay for the whole process. You should pay for my prenatal care, you should pay for my otherwise very expensive hospital delivery, you should pay for my health insurance, you should pay for the upkeep of this child after it is born because that’s where the concern seems to cut off with these people–once you take your first breath it’s ‘Out the window with you.’ And it is really a form of slavery to force women to have children they cannot afford and then to say that they have to raise them. So if that’s not going to be story you’re going to have Romania under Ceaușescu where the orphanages fill up. Romania under Ceaușescu, for those who don’t remember it, he mandated four children per woman, and you had to have a pregnancy test every month, and if you did not get pregnant you had to state why. It was nuts, and it did result in a number of suicides, and a number of kids being put into orphanages with no proper care at all. It was just horrible. So if that’s what you want, State of Texas, live your dream. We can all watch and see what that looks like, and whether you’re actually going to force this upon women and families and not pay for any of it. If you’re drafted into the army, the other situation in which the state seizes control of your body, at least you get three meals a day, clothing, and a place to sleep. So if you’re going to do that to women then pay up.”

.
AND TO LEARN HOW ONE 1974 CONFERENCE CALL TRIGGERED THE EVANGELICAL OUTCRY OVER ABORTION WATCH THIS:

Previous post:
Does CBD Oil Work Well When You Have High Blood Pressure? Next Post:
Light Knows When We’re Looking At It & Behaves Differently When It’s Being Observed