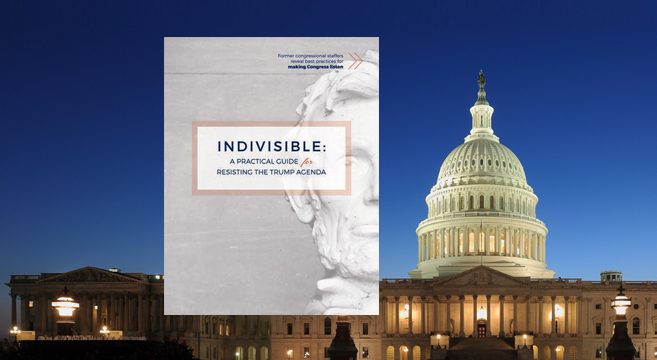 INDIVISIBLE: The Ingenious How-To Book The Resistance Is Using To Win Back D.C. Power

This time two years ago, we were lost, angry, and scared. Donald Trump was on the verge of taking power, and we all knew that no one in Washington was prepared to stand up to him. In that moment the original Indivisible Guide was born with these lines:

“Donald Trump is the biggest popular vote loser in history to ever call himself President-Elect. In spite of the fact that he has no mandate, he will attempt to use his congressional majority to reshape America in his own racist, authoritarian, and corrupt image. If progressives are going to stop this, we must stand indivisibly opposed to Trump and the Members of Congress who would do his bidding. Together, we have the power to resist – and we have the power to win.”

“Looking back, we think this holds up pretty well,” writes the Indivisible team. “In 2017, we made Congress listen. Indivisibles went to town halls, die-ins, and district offices. We defeated TrumpCare, rallied for immigrants, and turned the Republican tax cut for the rich and corporations into an enormous political liability. We stiffened Democratic spines and weakened Republican resolve. We couldn’t stop everything — but we did stop a lot.”

“In 2018, we remade Congress. Indivisibles endorsed candidates, registered voters, phone-banked, and knocked doors. We dragged our friends, family, and strangers to the polls. Drop by drop, we built the blue wave. As a result, this Congress will feature a new generation of bold, diverse leaders, and dozens of Trump-supporting Republicans are out of a job. To be sure, the new political reality is complex, and we didn’t get everything we fought for. But we know our next steps, and we’re not giving up.”

“This Guide is for what comes next. The 2016 Indivisible Guide was about using constituent power to defend our values, our neighbors, and our democracy. This Guide is about using our constituent power to go on offense. Offense is exciting, but it’s more complex than defense. We have the opportunity to use congressional oversight to hold Trump and his cronies accountable. We can set the legislative agenda with a bold progressive vision rooted in inclusion, fairness, and justice. But none of this is automatic — we have to demand it of Congress.”

“Two years ago, we wrote the Indivisible Guide because we knew that everything we hold dear was under threat. We believed the only chance this country had was for us to come together and mount a powerful nationwide grassroots resistance — one grounded in a fierce commitment to defend progressive values. To stand up for our democracy, and for one another. We’ve lost a lot since then, but we — along with critical partners — have accomplished so much to take hope from. We resisted. We retook power. And now, with control of the House of Representatives, we will stand indivisible to remake this country. The following pages offer a road map for the next two years of our journey. Together, we will pave the way to the post-Trump era. Together, we will win.”

THE NEW YORK TIMES: “One of the biggest successes so far this year is the organization called Indivisible. …Indivisible has played a leading role in turning out voters at congressional town halls to voice their opposition to Trump’s plan to repeal Obamacare — a tactic explicitly copied from the Tea Party’s organizing drive in 2009-2010.”

SENATOR ELIZABETH WARREN: “In one year, [Indivisible has] become a powerful political force in this country. Democracy is under assault from Donald Trump and the Trump administration but at the very same moment, democracy is rewiring itself, and [Indivisible] is out there leading the charge. …Because that’s what Indivisible people do – we work hard, we fight, and we win.”

SENATOR KIRSTEN GILLIBRAND: “Indivisible has helped people get off the sidelines and take action to fight for the issues that matter most to them.”

THEDA SKOCPOL (AUTHOR OF ‘THE TEA PARTY AND THE REMAKING OF REPUBLICAN CONSERVATISM’): “The scale of the activity, the energy behind it is comparable to – if not more than – what was going on with the Tea Party back in 2009.”

THE AMERICAN PROSPECT: “The resistance movement involves many existing liberal groups, … but also, crucially, an amazing number of newly-formed activist groups. The most successful is Indivisible, started by three former congressional staff persons.”

THE NEW YORKER: “Indivisible’s efforts [in Alabama] appear to have been particularly well targeted. Of the six counties that the group focussed on in Alabama, three of them—Madison, Lee, and Mobile—flipped from having a majority of their voters select Trump last November to a majority choosing Jones. In the other three counties where it knocked on doors, made calls, and sent the majority of its texts—Houston, Dale, and Henry—the G.O.P.’s winning margins shrank by more than twenty points.”

THE ECONOMIST: “The breakout star of the new activists, Indivisible, was launched by a pair of former Democratic congressional staffers in January, and now has 6,000 groups, in every congressional district.”

POLITICO: “If Democrats are able to retake the House in 2018, it will be a victory built from Greenberg and Levin’s blueprint—which helped shake many white-collar progressives out of their abstract, coffeehouse-and-protest idealism and reacquaint them with a belief in shoe-leather, show-up-with-bodies democratic politics.”

SENATOR CHRIS MURPHY: “It’s really unbelievable what [Indivisible has] done in a short period of time. [They] have saved lives. That’s not hyperbole.”

BROOKINGS INSTITUTION: “Indivisible groups were instrumental in pressuring members of Congress not to end Obamacare, again taking a leaf from the Tea Party by showing up, well briefed and vocal, at members’ town hall meetings.” 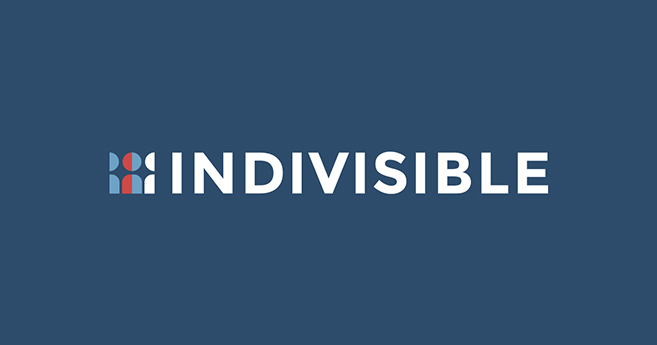 Previous post:
In 18 Simple Words, Picasso Perfectly Captured The Secret To The Meaning & Purpose Of Life Next Post:
5 Things To Know About Marrakech Before You Go