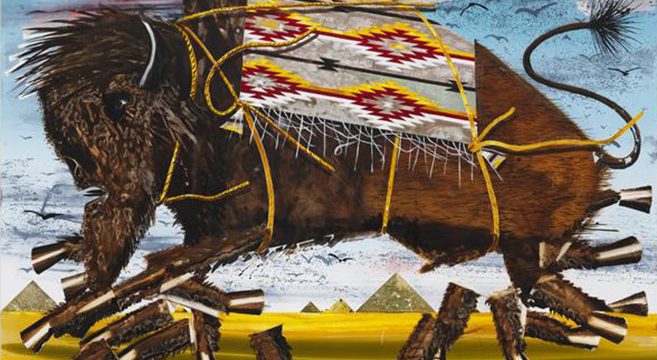 Robot Paints Microscopic Brushstrokes For U.S. Artist’s Canvases Worth Over $100,000

Marianne Boesky Gallery is pleased to present Frontier Ballads, Barnaby Furnas’s seventh solo exhibition with the gallery. The exhibition will feature new paintings that both encapsulate and question deeply-held mythologies of American identity, from representations of the rugged terrain of the West and the legendary explorers who settled it, to symbols of patriotism and those marking the country’s image of wholesomeness. This body of work also marks a new phase in Furnas’s ongoing experimentations with process and technique, as the paintings are being created in part through new robot technologies developed to his specifications. Furnas’s works can sell for more than $100,000 in New York galleries.

“Furnas and several artists are using digital printing robots that use techniques in paintings that were previously impossible or too labor intensive,” writes Reuters. “The machines are guided by inputs from artists and optical sensors to paint in fine detail in lines thinner than a human eyelash. He has used a robot called ‘sozo,’ which means imagination in Japanese, for tasks such as painting thousands of hairs on a bison in one of his artworks. It leaves marks on a canvas according to his instructions that he communicates through an optical tracking system attached to a paintbrush-like rod.”

The new paintings are created through Furnas’s characteristic play with figuration and abstraction. Lines, color blocks, geometric shapes, and pools of paint at once fragment and build up the overarching scenes, creating kaleidoscope-like effects that amplify the sense of motion and heighten the sensory impact of the work. A methodical investigation of tools and materials has served as a connective thread throughout Furnas’s practice, yielding to a range of aesthetic breakthroughs in his work. His diverse cache of painterly techniques, which includes pouring, splashing, patterning, and even burning converge to create a truly tactile experience of the picture plane.

This ongoing study led to a partnership with the start-up, ARTMATR, which is exploring and developing new technologies for artists with the support of MIT Media Lab. Working with Furnas, ARTMATR developed multiple hardware and software devices, augmenting the many techniques Furnas has developed over the years. These include effects achieved with hypodermic needles, pours, masks, and spraying devices. The latest additions supplied by ARTMATR are a series of digital devices for recording Furnas’s unique marks, customized software, robotics, and modified digital printing technology. These versatile tools allow Furnas to complete his large-scale canvases with a greater breadth of creative options and attention to myriad details. Furthermore, this experimentation with new technical approaches extends Furnas’s thematic complexity around the ideas of mirroring, reflection, and movement. Together, these tools offer Furnas the ability to extend his vision beyond the constraints of the human hand. Furnas is also engaging in a wider set of ideas around human-machine capabilities, working with ARTMATR to create further technologies to support his practice. 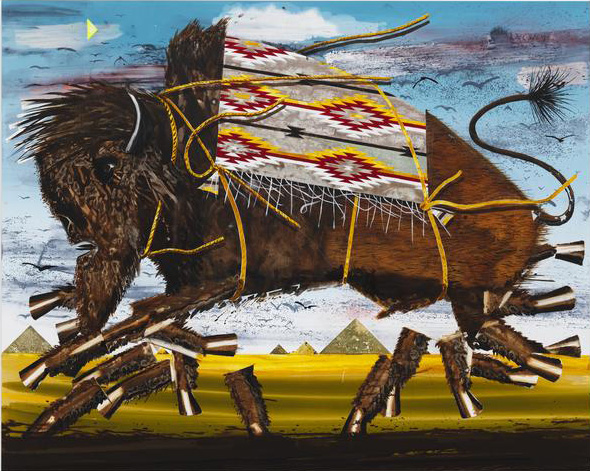 For much of his career, Furnas has dealt with the epic—battle scenes, biblical tales, natural disasters, and moments of human triumph and failure. His paintings roil with vibrant action that lives just beneath and atop the surface, contained and fractured by the two-dimensional confines of the canvas. Confronted with the tumultuous 2016 presidential election, Furnas began probing at a subject that has itself been built on the tension between the real and perceived: American identity. From large-scale portraits of wooly buffalos to scenes of travelers traversing distant lands to images of Midwestern choir singers, Furnas’s new paintings exude a sense of nostalgia that simultaneously feels at the brink of rupture—at any moment those idealized views will crack from the energy and emotion underneath.

Previous post:
Incredible New Scribit™ Robot Turns Any Wall Surface Into A Dream Canvas Next Post:
Is HEREDITARY Too Terrifying? Audience Heart Rates Off The Charts For Horror Of The Decade