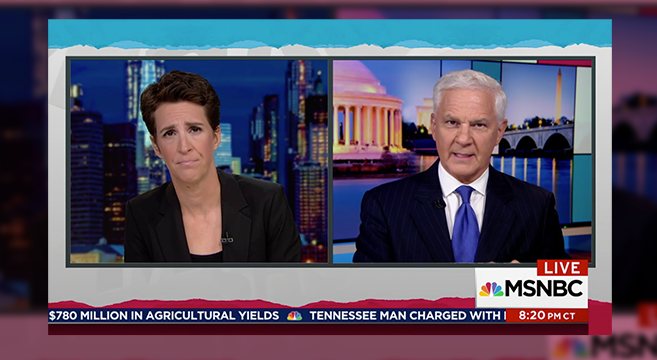 Joe Cirincione, MSNBC nuclear security analyst, spoke with Rachel Maddow last night about how Donald Trump’s insult-comic threats against North Korea have only escalated the threat of war with North Korea. He cites the estimate of retired Admiral James Stavridis, currently the Dean of the Fletcher School of Law & Diplomacy, who told Los Angeles Times reporter Barbara Demick this weekend that a chance of a conventional war in Korea now stands at 50-50 and a nuclear one at 10 percent. Cirincione believes the nuclear chance is much higher.

He also references an op-ed from 38 North, the leading think tank of the U.S.-Korea Institute at Johns Hopkins SAIS, which is begging Pyongyang and Washington to cool it. Entitled “Let’s All Take a Deep Breath”, the op-ed explains how North Korea’s behavior within its borders does not reflect that of a suicidal nation, and the rhetoric needs to stop. The Intercept also adds that North Korea has been acting the same way forever, and the real threat is Donald Trump’s ego and Twitter account:

“‘The overall consistency of North Korean policy has been pretty remarkable over, I’d say, 50 years or so, and [Kim Jong-un] is basically carrying on that policy, which is to provoke, take outrageous actions below the level of triggering a major conflict with the United States and South Korea,’ Blair told Politico’s Susan Glasser. A few days before Trump, speaking at the United Nations, threatened to ‘totally destroy’ North Korea – not just its leader but, apparently, the entire country – Glasser observed that the United States had become the author of, as she delicately put it, ‘unorthodox approaches.’ He adds, ‘We used to be the strong, silent type on all of this crazy rhetoric coming out of Pyongyang … and that’s not the style of this president,’ Blair replied. ‘Now we have this rhetorical stream going back at North Korea itself. So that is different.'”

As Maddow explains, North Korea has shot down U.S. aircraft in the past, and their latest warning last week that they will shoot down an American plane even if it’s outside North Korea’s borders should be taken seriously. The U.S. currently flies its B1 nuclear bomber(s) near North Korea at least twice a month. If one of those gets shot down then we are in serious trouble.

Just yesterday, the U.S. began missile interception test exercises in Scotland alongside troops from Britain, Canada, France, Germany, Italy, Spain and the Netherlands. Yahoo reports: “The Ministry of Defence (MoD) hailed Formidable Shield as ‘one of the most sophisticated and complex air and missile exercises ever undertaken in the UK.’ A Royal Navy Type 45 Destroyer and two Type 23 frigates are being joined by 11 other ships, 10 aircraft and 3,300 personnel for the month-long exercise. They will work together to detect, track and shoot down live anti-ship and ballistic missiles. Nato said the ‘major’ exercise in the Outer Hebrides aimed to foster cooperation between allies in the face of possible threats from missile attacks.”

Joe Cirincione, MSNBC nuclear security analyst, talks with Rachel Maddow about how Donald Trump’s insult-comic threats against North Korea have only escalated the threat of war with North Korea.