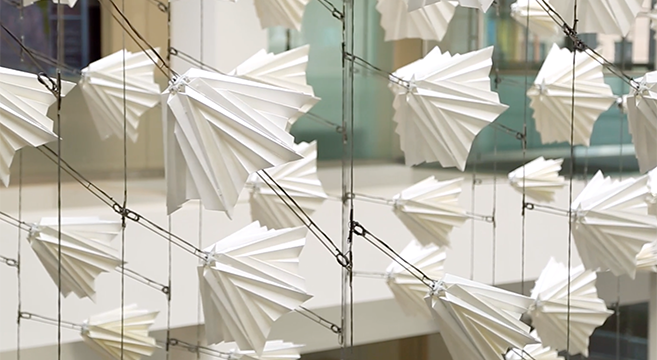 An ancient art form has taken on new shape at NASA’s Jet Propulsion Laboratory in Pasadena, California. Origami, the Japanese tradition of paper-folding, has inspired a number of unique spacecraft designs here. It’s little wonder that it fascinates NASA engineers: origami can seem deceptively simple, hiding complex math within its creases. Besides aesthetic beauty, it addresses a persistent problem faced by JPL engineers: how do you pack the greatest amount of spacecraft into the smallest volume possible? One answer might be found in the Starshade, an immense, folding iris that has been proposed as a way to block light from distant stars. It would unfurl to a diameter of about 85 feet (26 meters) in space, about the size of a standard baseball diamond.

Dampening the brightness of a star’s light would extend the capability of a space telescope to detect orbiting exoplanets. One future project being considered for possible use with Starshade is the Wide Field Infrared Survey Telescope, which will employ a special coronagraph to image larger planets around other stars. If a Starshade is flown, combining it with WFIRST would allow it to detect smaller planets, too. Something that big is more at risk of micrometeorite strikes; any punctures could mean light getting through and obscuring a telescope’s vision. That’s why JPL turned to an origami-inspired folding pattern, said Manan Arya, a technologist working on Starshade. “We use multiple layers of material to block starlight, separated by some gaps so that, if we do get hit, there’s a good chance that there won’t be a line-of-sight puncture,” Arya said.

The key was developing algorithms that allow the Starshade to fold smoothly, predictably and repeatedly. “A huge part of my job is looking at something on paper and asking, ‘Can we fly this?'” Arya said. He could be considered Starshade’s “origamist in chief.” His PhD thesis looked at the use of origami in space superstructures.

A colorful history of space folding inspired him. That includes solar arrays, like those on the International Space Station; experimental wings designed for the space shuttle program in the 1980s; even Echo 1, a 10-story-tall, Earth-orbiting balloon that had to be packed into a 26-inch-diameter (66 centimeters), spherical payload canister before launching. “Once I realized this is how you fold spacecraft structures, I became interested in origami,” Arya said. “I realized I was good at it and enjoyed it. Now I fold constantly.”

Salazar tests folding designs and materials in a work area littered with scraps, mostly from paper. He also folds Kapton, a tinsel-like material used as spacecraft insulation, and a special polyethylene fabric that doesn’t form permanent creases. “With most origami, the magic comes from the folding,” Salazar said. “You can’t design purely from geometry. You need to know the qualities of the material to understand how it will fold.”

Salazar has been making origami for 17 years. As a kid, he was inspired by the children’s book “Sadako and the Thousand Paper Cranes.” His own original designs include paper animals. In fact, he folds paper versions of endangered species and donates them to benefit wildlife conservancies. He said the use of origami in engineering is relatively new and is spurring the publication of technical papers on folding patterns. “There are so many patterns to still be explored,” Salazar said. “Most designs are for shapes that fold flat. Non-flat structures, like spheres or paraboloids, largely haven’t been done.”

Starshade and the Transformers project are still in their early stages. But Arya points out that we could see space origami very soon. CubeSats are one promising application: these miniaturized satellites are the size of a briefcase, and NASA will launch several key missions using these modular spacecraft in coming years. Because they require so little space, mass and cost, they’re easier to launch. But CubeSats are limited in what they can do without folding structures, which can pack antennas and other equipment into them. “That’s an area where I see origami having an increasing role,” Arya said.

Another is robotics. A JPL robot called PUFFER was inspired by origami. Its collapsible body is made from a folding circuit board embedded with fabric. When in use, it pops-up and can climb over rocks or squeeze down under ledges. In July, NASA placed an open call for origami designs to be used in radiation shielding — another sign that the art form has much to offer the future of space exploration. (Photo credits: NASA/JPL-Caltech, Magpie Aesthetic) 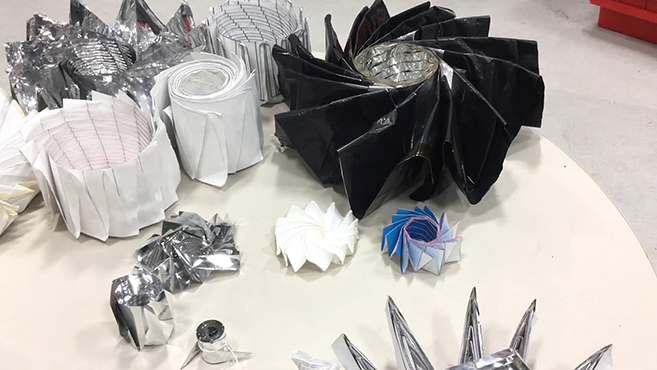 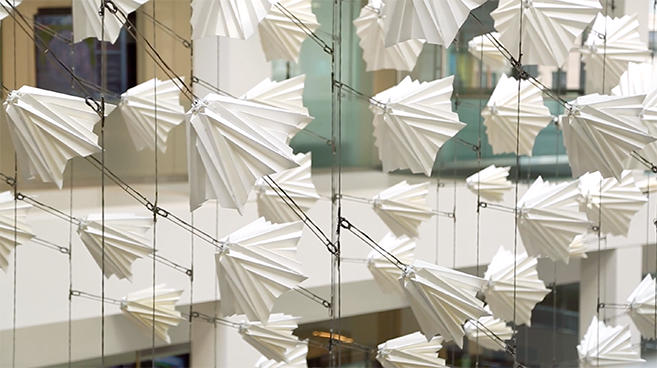