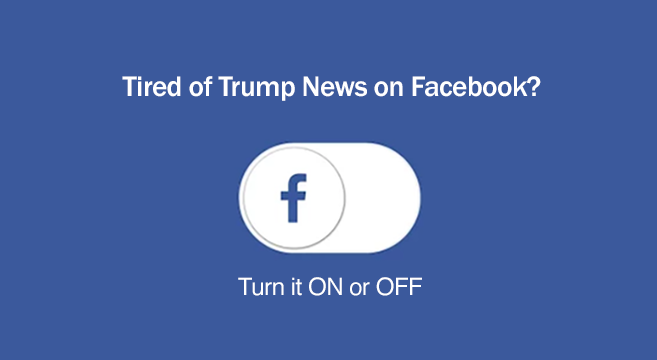 With each 15 minutes that passes, it seems like there’s another disastrous Donald Trump story in my newsfeed that sends my stress hormone levels and blood pressure through the roof. It’s unsustainable, it’s unhealthy, and it’s unnecessary. At this point, if the world is on the brink of nuclear war I simply couldn’t give a rat’s ass anymore — my reservoirs of rage and frustration at this man’s incompetence and sickening mismanagement of the most powerful position in the world have officially run dry.

In his newest op-ed for The New York Times this morning entitled Donald The Menace, Paul Krugman writes, “No, what we’re hearing sounds like a man who is out of his depth and out of control, who can’t even pretend to master his feelings of personal insecurity. His first two weeks in office have been utter chaos, and things just keep getting worse — perhaps because he responds to each debacle with a desperate attempt to change the subject that only leads to a fresh debacle. America and the world can’t take much more of this. Think about it: If you had an employee behaving this way, you’d immediately remove him from any position of responsibility and strongly suggest that he seek counseling. And this guy is commander in chief of the world’s most powerful military. Thanks, Comey.”

So in an attempt at preserving my sanity and mental health, and in an effort to guard whatever’s left in my protest glands for the years ahead, I’ve decided to write my own personal executive order for my social media diet going forward — no more Trump in my Facebook newsfeed. There are two ways to do this:

Once you download the app it takes care of everything all on its own. The developer doesn’t give any specifics on the algorithm and how it filters out the politics, but according to CNET it really does work. The developer writes, “Once again, here you are fuming at your Facebook wall. You wish you could browse Facebook without any politics on it. Now you can! Want Politics — turn politics on. Don’t want it anywhere near you — turn it off. Unfortunately memes will still exist. But we will do our best to take care of the rest.” DOWNLOAD THE PLUGIN HERE. (NOTE: only works on Facebook’s website and not the app)

But perhaps the best of the two options is the Social Fixer plugin. It allows you to filter out all things Trump, all things political, as well as all those garbage Sponsored Posts and such. It even lets you block out the Super Bowl, football, sports, Pokemon Go, and much more. The developers write, “Social Fixer is filled with features to make your Facebook experience better. Filter posts in the news feed by content, author, link url, and more. Built-in Filter Subscriptions let you just pick a filter and use it without knowing how it works. Pre-defined filters include hiding Sponsored Posts, Political posts, things your friends like, and much more. Hide posts you’ve read and are done with, so they don’t appear in the news feed anymore. Select from a list of Display Tweaks to customize the interface, or write your own with CSS. Force FB to stay on the Most Recent feed. Hide parts of the page you don’t want to see, like panels in the left or right columns. Stealth Mode hides Like buttons, Comment areas, etc so you can browse Facebook without accidentally interacting with posts you don’t intend to. Filters and Tweaks are updated regularly and automatically available to you to use without any additional work. Features will be added continuously to make your Facebook experience as great as possible!” DOWNLOAD SOCIAL FIXER HERE: Chrome, Firefox, or Safari. (NOTE: only works on Facebook’s website and not the app)

STEP 1: Download Social Fixer and it will appear in the top right of your Facebook page.
STEP 2: Click on that icon then click on Social Fixer OPTIONS.
STEP 3: On the left side bar click Filters.
STEP 4: Click the green plus sign on “Election/Politics 2017” (as of Jan. 31, 2017 this filter will block out all stories with the following in your newsfeed: trump|pence|hillary|bernie|libertarian|gary johnson|jill stein|green party|election|republican|democrat|democratic|political|politics|politician|clinton foundation|electoral|ben carson|chris christie|giuliani|ivanka|inauguration|kellyanne conway|sean spicer|tillerson
STEP 5: If you want to customize your own filter and get more crap off your newsfeed click on the “Create A New Filter” button. You can now add your own keywords such as: evangelical|hypocrite|abortion|planned parenthood|executive order|tea party|mitch mcconnell|muslim ban|paul ryan — and anything else your heart desires. 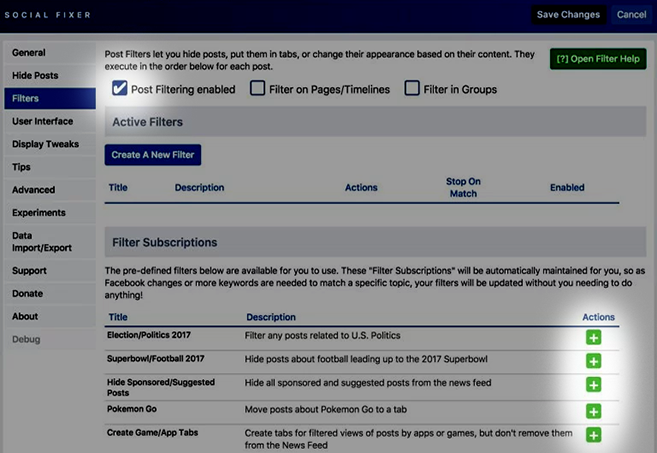 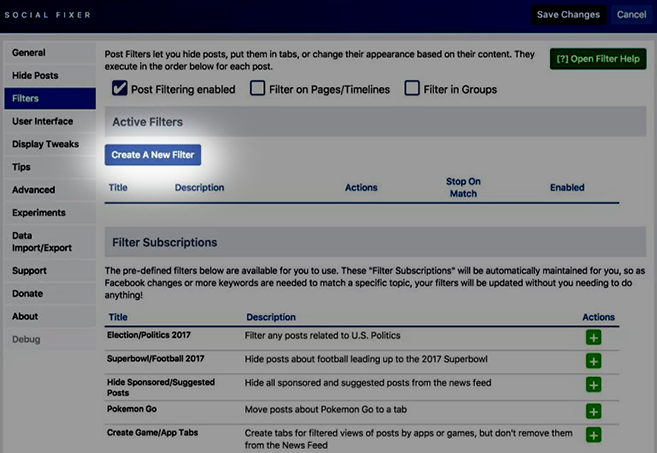 Previous post:
Just What the Doctor Ordered: The Health Benefits of Playing Video Games Next Post:
Mindblowing Academy Award-Nominated Doc “I Am Not Your Negro” Now In Theatres