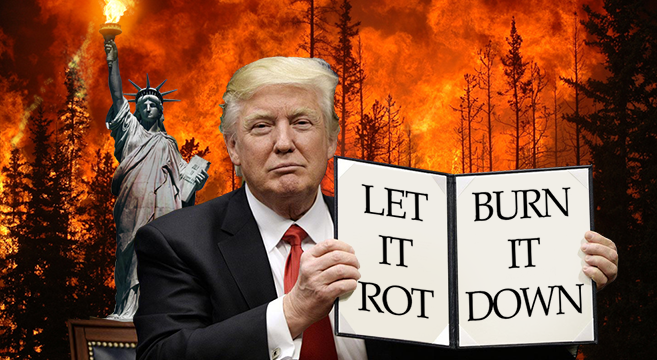 Democracy has a lot in common with a forest. When both are fed a proper supply of nourishment, and maintained in a proper balance, they are as strong, beautiful, and life-affirming as anything you can imagine. When this health and equilibrium is disturbed, however, it doesn’t take long for mold and tyranny to creep through the woodwork.

In the eleven short days since he took office, Donald Trump has done more to undermine American democracy than any administration since Richard Nixon’s. For example, his ad hoc and asinine executive order to ban Muslims from seven specific countries from entering the United States over terrorism concerns, and his firing of the acting Attorney General over her refusal to defend it, was as obscene a violation of the Constitution as anything witnessed in modern American history. It reeks of tyranny.

Trump’s promotion of white nationalist and chief strategist Steve Bannon to permanent inclusion on the National Security Council — while downgrading the director of National Intelligence and the Chairman of the Joint Chiefs of Staff to need-to-know basis only — should be as terrifying as seeing a child with a burning torch running around on an oil refinery. It stinks of white supremacy.

And when the President shuttered NASA’s climate change research division, then removed all reference to climate change from the White House website, and followed by using a gag order to muzzle all federal employees in government science — especially those at the EPA and the Agricultural Research Service — it sent a chill up the spines of those of us who care about the future of the environment and the planet itself. The insufferable stench of these actions smells less like something is rotting, and more like the smell of death itself.

For President Trump, dissent is tantamount to betrayal, and the events and actions of the past eleven days have led to the single greatest constitutional crisis since Watergate. And any honeymoon Republican lawmakers were enjoying since the inauguration has officially gone up in flames. Whatever sweet taste of victory these GOP members of Congress were enjoying when they won a Republican President and full control of the Senate and House, has now subsided to a hangover of epic proportions with the realization that their leader is quickly trying to burn the entire system of American democracy to the ground — and he is taking them down with him.

In his latest op-ed for The New York Times, David Brooks writes, “It’s becoming increasingly clear that the aroma of bigotry infuses the whole operation, and anybody who aligns too closely will end up sharing in the stench. The administration could have simply tightened up the refugee review process and capped the refugee intake at 50,000, but instead went out of its way to insult Islam. The administration could have simply tightened up immigration procedures, but Trump went out of his way to pick a fight with all of Mexico. Other Republicans have gone far out of their way to make sure the war on terrorism is not a war on Islam or on Arabs, but Trump has gone out of his way to ensure the opposite. The racial club is always there.”

Brooks quotes former Bush administration official Eliot Cohen who wrote in The Atlantic, “Precisely because the problem is one of temperament and character, it will not get better. It will get worse, as power intoxicates Trump and those around him. It will probably end in calamity — substantial domestic protest and violence, a breakdown of international economic relationships, the collapse of major alliances, or perhaps one or more new wars (even with China) on top of the ones we already have. It will not be surprising in the slightest if his term ends not in four or in eight years, but sooner, with impeachment or removal under the 25th Amendment.”

When the devastating force of Hurricane Katrina came and went, it left in its wake a tragic swath of thousands of homes stuck with the worst possible set of conditions: a water-soaked structure combined with blazing hot sunshine. The result was the inevitable spread of toxic black mold and the eventual forced destruction of most of these homes. With the election of Donald Trump to the Oval Office, we are quickly realizing that the White House and American democracy itself is being besieged by a similar perfect storm of “white mold” mixed with blazing hot fascism.

Like it or not, Trump shows no signs of slowing down with his egregious executive orders that reek of rot. And with each day that passes, and each new order that’s signed, it feels as if we are trapped in a forest with no rain in sight. When California’s drought began to take hold back in 2012, no one could have imagined the devastation that was coming over the next four years. Even though much of the state has now returned to healthy water levels thanks to a deluge of winter rain and snow in recent weeks, one of the most disturbing remnants of the drought can still be found in the north of the state.

The state’s beloved sequoias, the iconic redwood species of trees found only on the western slopes of California’s Sierra Nevada Mountains, are the largest trees on Earth. Measuring 164–311 feet in height, and 20–26 ft in diameter, the sequoias are one of Mother Nature’s undisputed crown jewels, and are among the oldest living things on Earth. The oldest sequoia on record is 3,500 years old.

It’s difficult to imagine how anything that’s survived as long as these majestic trees could ever be affected by drought, but many of the sequoias in the region are bone dry and showing signs of extreme stress. Anthony Ambrose and his team of researchers are leading the charge to learn more about the exact level of stress the sequoias are enduring right now. Together, Anthony and his team climb several hundred feet into the canopy, ” braving life and limb in the name of conservation,” writes Great Big Story in their feature profile of Anthony’s team and the plight of these remarkable giants of the forest.

As scientists like Anthony continue to gather the data (as you can see in the video below), a better picture will begin to come together about what the future holds for the sequoias. As vital as this conservation work is, however, it will be of little or no use should the worst case scenario come into play. With each summer that comes around, California’s fire season rears its head once again. The sequoias have continuously dodged a bullet in recent years as the bulk of California’s forest fires have stayed in the southern areas of the state. But one has only to look at the aerial photography of the sequoias to see large swaths of dry, brittle orange mixed with faded green. If a fire were to ever ignite in this area, no amount of firefighting would be any match for what would happen next.

As we move into the next days, weeks, and months of Trump, we should hold the lessons of the sequoias in our minds as we watch a similar tragedy take hold on American democracy. Just as we cannot take the health and immortality of the sequoias for granted, the same holds true for the future of democracy.

But unlike Mother Nature, we have something firefighters do not — we have full control over the elements that will quash this drought. Together we can summon the storms of protest to protect liberty and justice. Together we can purify the halls of power from rot by protecting the Constitution. And together we can nourish our better angels from this day forward to prevent anything like the rotting, white mold of Trump & Co. from ever getting hold of power again. (Trump photo credit: OLIVIER DOULIERY/GETTY IMAGES, via NYDailyNews.com; Trump logo graphic below by Tucker Viemeister via Dezeen.com)
.