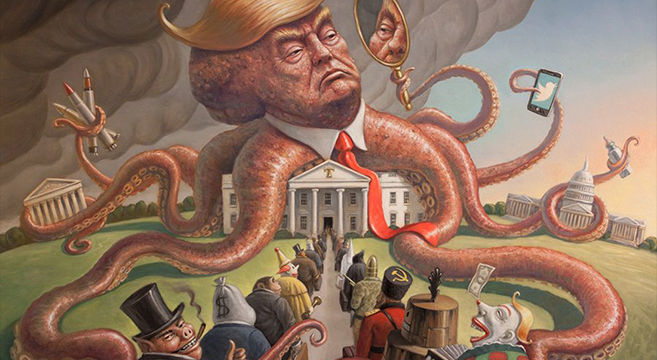 He hasn’t even been in office a full week and Trump’s inner circle has already been thrust into DEFCON-4 red alert status numerous times — but for the worst possible reasons. During the presidential campaign we learned that Trump’s addiction to media extends far beyond his Twitter account. He engorges himself on morning TV for hours at a time, and is obsessed with his coverage in print media as well. Foolish were we to assume his addiction would stop when he set foot in the White House. The following are seven recent reports of how Trump’s inner circle has seen their stress hormone levels spike due to Trump’s media addiction and obsession over any threat to his ego.

1. TV & PRINT ADDICTION: “Most mornings, Trump flicks on the TV and watches Morning Joe, often for long periods of time, sometimes interrupted with texts to the hosts or panelists,” write Mike Allen and Jim VandeHei of AXIOS. “After the 6 a.m. hour of Joe, he’s often on to Fox & Friends by 7 a.m., with a little CNN before or after. He also catches the Sunday shows, especially Meet the Press. ‘The shows,’ as he calls them, often provoke his tweets. The day of our interview with him, all of his tweet topics were discussed during the first two hours of Morning Joe.” They add, “When Billy Bush was on, [it was] Access Hollywood every night. TiVo of the morning and evening news shows so he can watch the tops of all of them. Always 60 Minutes. Often Meet the Press. Lots of New York talk radio.” Trump’s addiction to TV now has major political and geopolitical consequences, for his reactions to TV reporting often leads to tweets. But his addiction to TV and media has nothing to do with learning — it’s a pathological addiction to his own reflection.

2. CHICAGO “FEDS” & VOTER FRAUD INVESTIGATION: Last night Trump sent out a tweet which read: “If Chicago doesn’t fix the horrible ‘carnage’ going on, 228 shootings in 2017 with 42 killings (up 24% from 2016), I will send in the Feds!” NBC News now says that he sent that tweet because of a report he was likely watching on FOX at the exact same time. And earlier this morning Trump sent out another tweet which stated, “I will be asking for a major investigation into VOTER FRAUD, including those registered to vote in two states, those who are illegal and even, those registered to vote who are dead (and many for a long time). Depending on results, we will strengthen up voting procedures!” The tweet also came as morning news shows were eviscerating him and his Press Secretary for entertaining the idea that voter fraud at this scale was behind his loss of the popular vote. Yesterday White House Press Secretary, Sean Spicer, took a beating by reporters who demanded to know why the President hadn’t launched an investigation into the widespread fraud if he believed it to be true.

3. ANGER & INAUGURATION: A large group of Trump’s closest aides and staff have leaked inside information to POLITICO on how the President has been “angry” and “bored” since the inauguration. The morning after his inauguration he was incensed at the coverage of the low turnout and the global women’s march in protest of him. “He can never let go and stop watching cable TV,” said Douglas Brinkley, a presidential historian, in the POLITICO interview. “Now he’s off to the worst start of a presidency in a very long time.” POLITICO adds, “That Trump wanted Sean Spicer, the press secretary, to go out with props in the White House briefing room — two large pictures of the crowd — was trademark, people who know him say. Trump loves props. One person who frequently talks to Trump said aides have to push back privately against his worst impulses in the White House, like the news conference idea, and have to control information that may infuriate him. He gets bored and likes to watch TV, this person said, so it is important to minimize that. This person said that a number of people close to him don’t like saying no — but that it has to be done.” Rep. Mark Sanford is a South Carolina Republican who warns, “It’s unconventional at best and disastrous at worst. These distractions have the capacity to sink his entire administration, and they’re not representative of the quite serious people he’s assembled.” According to AXIOS, Trump reportedly wants to replace Spicer as White House Press Secretary soon as possible.

4. TRUMP’S SPOKESCOBRA CONWAY: When Kellyanne Conway took to the airwaves on Meet The Press and defended Sean Spicer’s false statements in the White House Press Room that the inauguration was the most attended in history, her choice of the words “alternative facts” went around the world instantly. Those words would later send sales of George Orwell’s dystopian classic, 1984, through the roof. Following Conway’s outrageous appearance, Trump ordered V.P. Mike Pence to go out and praise Conway for her appearance. VANITY FAIR reports, “Trump, meanwhile, reportedly called Vice President Mike Pence to extol Conway’s “alternative facts” face-off with Chuck Todd on NBC’s Meet the Press and offered her effusive praise onstage at a black-tie dinner on the eve of the inauguration.”

5. KUSHNER vs. CONWAY: The Washington Post reports on some heavy duty infighting between Trump’s son-in-law and closest advisor, Jared Kushner, and Kellyanne Conway. “Efforts to launch an outside group supporting Trump’s agenda have stalled amid fighting between Kushner loyalists, such as the campaign’s data and digital strategist Brad Parscale, and conservative donor Rebekah Mercer, according to people familiar with the tensions. Major disputes include who would control the data the outside group would use, with Mercer advocating for Cambridge Analytica, a firm in which her father is invested, and who would control the lucrative contracts with vendors, these people said. Two people close to the transition also said a number of Trump’s most loyal campaign aides have been alarmed by Kushner’s efforts to elbow aside anyone he perceives as a possible threat to his role as Trump’s chief consigliere. At one point during the transition, Kushner had argued internally against giving Conway a White House role, these two people said.”

6. BLUNDERED C.I.A. APPEARANCE: As a way to repair his terrible relationship with the intelligence community, Trump’s team arranged for him to visit C.I.A. headquarters. The “high-stakes trip to the headquarters of the Central Intelligence Agency,” writes The New York Times, was orchestrated to “demonstrate support of the agency and criticize Senate Democrats for delaying confirmation of his nominee to lead it, Mike Pompeo. The advisers left thinking he agreed. After racing through his words of reconciliation at the C.I.A. in Langley, Va., Mr. Trump launched into a rambling, unscripted discussion that drifted to the topic of crowd size, making a series of verifiably false claims. Mr. Spicer then went to the White House briefing room for his first turn at the lectern and issued a blistering attack on reporters, made his own false claims and then stormed out without taking questions.” Trump’s choice to appear at the C.I.A. in front of the agency’s sacred wall of heroes was the last straw for former C.I.A. director John Brennan who blasted Trump’s speech as “despicable.”

7. POKING THE CHINESE DRAGON: Trump’s addiction to media and ego-care has sent his aides’ blood pressure through the roof many times in recent days, but none of it compares to the fallout that happens when he goes on a Twitter rampage against China, or communicates with Taiwan, or rambles about what China is doing in the South China Sea. Experts such as Ian Bremmer, the world’s #1 geopolitical risk analyst, as well as Richard Haass, President of the Council on Foreign Relations, believe Trump may have already triggered what’s known as the Thucydides Trap — the school of geopolitical philosophy that says war with the U.S. and China is inevitable. And Chinese media are also warning Trump of the dangerous consequences of playing with this fire. “China’s state media has lambasted Donald Trump for conducting foreign policy through Twitter, in a commentary reflecting Beijing’s frustration with the US president-elect’s unorthodox style of diplomacy after his tweets broached sensitive issues in Sino-US relations,” writes the South China Morning Post. “State-run news agency Xinhua published the article, headlined Addiction to Twitter Diplomacy is Unwise, late on Tuesday night, hours after Trump’s tweet accusing China of refusing to help the United States contain North Korea’s nuclear ambitions.” (Illustration by Mark Bryan: visit ArtOfMarkBryan.com and follow him on Instagram)

SEE ALSO: Lord Of The Lies: What William Golding’s Classic Teaches Us About Cults & The Fall Of Trump
.

“The Party told you to reject the evidence of your eyes and ears. It was their final, most essential command. And if all others accepted the lie which the Party imposed — if all records told the same tale — then the lie passed into history and became truth.” -George Orwell, 1984 #GeorgeOrwell #Orwell #1984 #Trump #DonaldTrump #AlternativeFacts Illustration by @markbryanart

Previous post:
Travel The World With Food: In Your Own City? Next Post:
The Incredible Story Behind Eddie Van Halen’s Guitar Solo On Michael Jackson’s “Beat It”