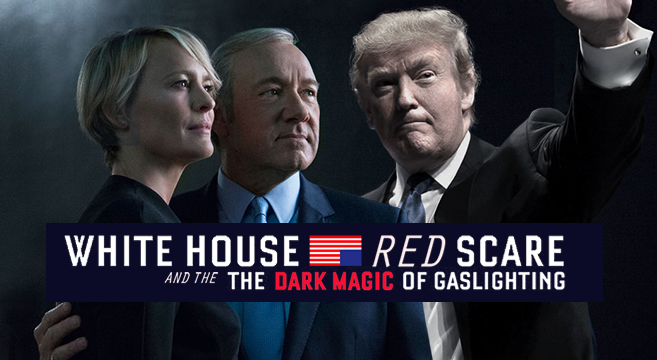 Underwood & Over A Barrel: House Of Cards, Trump & The Dark Magic Of Gaslighting

Perhaps it was divine political intervention that I held off on watching the very first episode of House Of Cards until December 2016. It was exactly four weeks after Trump won the election that I pressed play on the award-winning Netflix series and fell under an intoxicating and surreal spell of the show that masterfully blends Washington truth and Hollywood fiction. The Machiavellian schemes and deadly deals orchestrated by South Carolina Congressman Frank Underwood (Kevin Spacey) and his wife Claire Underwood (Robin Wright) over the course of their rise to power required a moderate amount of “willing suspension of disbelief” from me. But each time I took a break from the show and alternated back to news updates from real life, I began to read between the lines of what I was seeing and. With each episode I watched, and with each news update I took in afterwards, I began to suspect the parallels might be much more than coincidental. The need for a willing suspension of disbelief was no longer required.

Now January 11, 2017, I’m halfway through season four and Frank Underwood’s reelection campaign, and my breaks are filled with the latest news of leaked items from Donald Trump’s briefing last Friday from the four heads of the intelligence community. What the public had initially assumed was an intel briefing to prove to Trump once and for all that Russia was definitely behind the hacking of the DNC and the private emails belonging to Hillary Clinton’s campaign members, eventually turned out to be much more scandalous. CNN broke the story late yesterday with a 2-page distilled synopsis of what the intelligence chiefs presented to Trump — a document which contains “explosive, but unverified, allegations” that Russian agents “endorsed by Putin” have been “cultivating, supporting and assisting” President-elect Donald Trump for no less than five years. The intelligence chiefs told Trump that Putin has gained highly compromising information about him with the aim of blackmailing him during his presidency and “encouraging splits and divisions in the western alliance.”

Buzzfeed later published the highly controversial non-summarized 35-page document in full, much to the shock of various legacy news publications. Chris Sanchez of Business Insider writes, “The dossier, which was reportedly compiled by a former British intelligence agent, included unsubstantiated claims that Trump cooperated with Russian officials in operations meant to target his political opponents. BuzzFeed’s report also notes ‘graphic claims of sexual acts’ that allegedly occurred in Trump’s presence while he was in Russia.”

The leak came late Tuesday night, just hours before Trump gave his first press conference in 167 days, and the first since his election victory. What was originally scheduled to be a full explanation of how Trump has separated himself from his business turned into a raucous Q&A about the Russian dossier scandal. At one point Trump even refused to take a question from CNN’s Jim Acosta, when after continuously ignoring Acosta’s request for a question, Trump turned to him and shouted, “You are fake news!” It was the kind of scene that writers from House Of Cards might have been hesitant to include in a script because it would seem too far-fetched — not anymore.

Like everything that enters his mind and comes out of his mouth, Trump’s disdain for the intelligence community comes from his ego. He refuses to seriously acknowledge Russia’s involvement in the election because it would tarnish his belief that his victory was all because of him. But Trump would be wise to end his takedown of the intel community because they hold the true power. As George W. Bush made it clear in an ominous warning to incoming President-elect Barack Obama, “Do not piss off the intelligence community.” President Frank Underwood would have wisely heeded the same warning.

A good friend of mine who was born and raised in Washington, D.C. once told me, “Never, ever believe what you read in the news.” It’s not as if what you read in the Washington Post or see on CNN is necessarily fake. In exactly the same way in which Frank and Claire Underwood are able to manipulate minds with carefully orchestrated and diabolical news leaks, the media of our real world often functions in the exact same way. Think of the media as the sea and the politicians as the ships. If you think a political opponent is getting too far ahead, you can use the press to drown him or her down with some unpredictable winds and waves. It’s survival of the fittest, Underwood style. But it’s not just the politicians who play this game, it’s the intel agents as well — they are the undisputed masters of these dark arts.

In his op-ed piece in this morning’s New York Times entitled The Dark Magic Of Kellyanne Conway, Frank Bruni profiles the indefatigable Kellyanne Conway, “the David Blaine of political spin, intent on working feats of magic that few others would attempt and surviving situations that would cripple any ordinary mortal … Many journalists don’t get Conway quite right, either, assigning her more power in Trump World than she has. When you’re doing that much TV, you can be in only so many meetings. What she possesses is a showmanship that Trump can’t help appreciating. I know dozens of people who despise her politics but are mesmerized by her performances. She’s the Streep of Fox & Friends (of Morning Joe, too) and a perfect emblem of these polarized times, when no claim is too laughable or denial too ludicrous if it counters the supposed insidiousness of the other side. She’s also the gold-haired standard for a rising generation of unflappable partisans.”

In her own brilliant op-ed entitled Donald Trump Is Gaslighting All Of Us, Frida Ghitis explores Trump’s innate talent for mind control and his gift for warping his followers’ perception of reality. “Reality is becoming hazy in the era of Trump. And that’s no accident. The fact is Trump has become America’s gaslighter in chief. If you’ve never heard the term, prepare to learn it and live with it every day. Unless Trump starts behaving in a radically different way after he becomes President, gaslighting will become one of the words of 2017. The term comes from the 1930s play Gas Light and the 1940s Hollywood movie version (Gaslight) in which a manipulative husband tries to unmoor his wife, played by Ingrid Bergman, by tampering with her perception of reality. He dims the gaslights and then pretends it’s only she who thinks they are flickering as the rooms grow darker. That’s only the beginning. He uses a variety of truth-blurring techniques. His goal is to exert power and control by creating doubts about what is real and what isn’t, distracting her as he attempts to steal precious jewels.
Mental health professionals have made much of the practice, said to be a favorite of narcissists and abusive spouses. But more recently the tactical tampering with the truth has become a preferred method of strongmen around the world. Gaslighting by other means was always a common feature of dictatorships, but it has found new vogue as a more subtle form of domestic political control even in countries with varying degrees of democracy.”

On January 20, 2017 Washington’s old House Of Cards will officially fall. Not only will it mark the end of Pax Americana, the #1 most dangerous geopolitical destabilizer of 2017 according to Ian Bremmer, the president of geopolitical risk consulting firm Eurasia Group, but it will also mark the end of business-as-usual political strategy. “The capital has never been more anxious about its own government. The town is suffering pre-traumatic stress disorder. This guy is really going to be president,” writes Maureen Dowd in her recent New York Times column entitled White House Red Scare. “Finally, there is bipartisan consensus: It’s time to flip out. Decades after duck-and-cover was a way of life, people here are once more in duck-and-cover mode. No one knows what is going to happen, but they know it will be utter chaos and that the old familiar ways have vaporized. On the verge of the inauguration, a time of stately ritual and tradition in a city baked in ritual and tradition, ritual and tradition are out the window. Donald Trump is operating on an utterly new, unique and freaky frequency.”

“Closed-door confabs in mahogany and marble rooms with brass spittoons have been replaced with Trump heckling, pouting, demanding and sharing his innermost thoughts on Twitter,” adds Dowd. “The city has the panicked air of a B-horror movie where the townsfolk stand stock still, bug-eyed and frozen, too frightened to flee, waiting for the creature. Everything is turned inside out into sauerkraut. Democrats are appalled that Trump is challenging the C.I.A., the same agency that got W.M.D.s wrong. Republicans are cuddling up to Russia. Mitch McConnell says the American people will not tolerate the Democrats’ holding up a Supreme Court nominee. WikiLeaks is protesting leaks. Trump and Sean Hannity suddenly love Julian Assange. The city’s mood is ‘surreal,’ as Senator Dick Durbin told The Times’s Carl Hulse on The Run-Up podcast.”

What will the new House Of Cards look like when Trump & Co. are done building it? Which pre-2017 politicos will survive and master the D.C. labyrinth now that Trump has burned the house down and is the post-truth Gaslighter-in-Chief? It’s clear that Trump knows what to do when he gets leaked on, but what happens in this new uncharted territory when he and his team eventually master the dark arts of politics and become the ones doing the leaking? We will likely have to redefine the word “dirt,” because by comparison, post-truth 2017 is going to make that pissy Moscow Ritz Carlton bed look as clean as the white tulips on Frank and Claire Underwood’s front lawn.
. 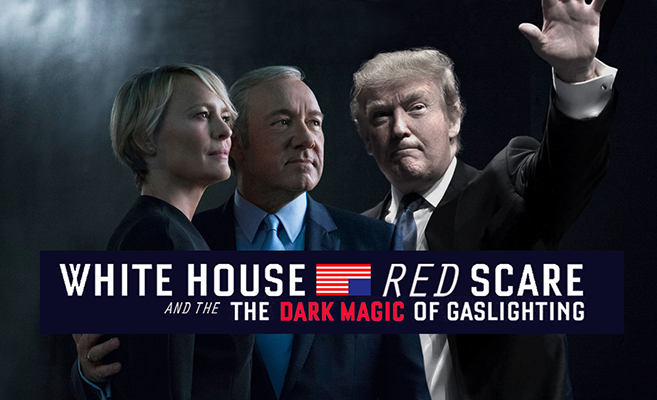 Previous post:
Nobel Prize-Winning Biologist Explains How Meditation Opens Genetic Fountain Of Youth In Your DNA Next Post:
Watch The Top 3 Most Mindblowing Metabolic Processes That Happen Inside You When You Exercise